COTTON (Gossypium)India has the largest area (7.89 mha) in the world under cotton cultivation. Cotton is a kharif crop in India. It is an important crop in wheat and coarse grain zones and alternates with wheat, jowar, and bajra.The conditions favourable for cotton cultivation are:(i) Uniformly high temperature, between 210C to 300C.(ii) Moderate rainfall between 50 cm to 75 cm, should not be more than 85 cm for then crop is destroyed, crop is grown both as a dry and wet crop as in Rajasthan, Punjab, west Uttar Pradesh, Maharashtra, Madhya Pradesh and Gujarat. 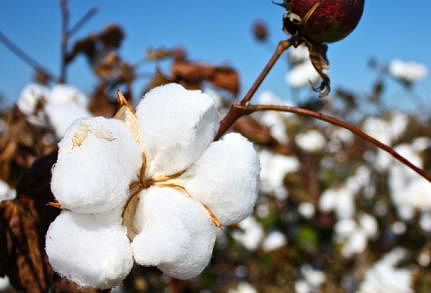 Cotton crop(iii) Grows well in drier parts of black cotton soil or 'regur' of Deccan Plateau in Maharashtra, also grown in mixed red and black soil are in Madhya Pradesh and on alluvial soils of Sutlej-Ganga plain.

(iv) Cheap labour required for sowing as well as picking.

SUGARCANE (Saccharum officinarium)India is the largest producer of sugarcane as well as sugar in the world. Sugarcane is the main source of sugar, gur and khandsari and is also consumed in chewing. It accounts for the largest value of production though covering only 1.8 percent of total cropped area of the country. 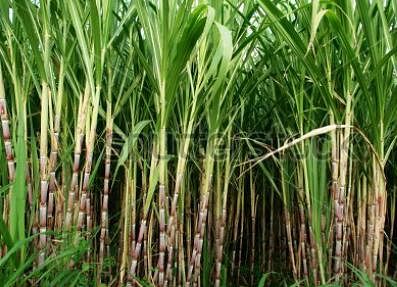 TOBACCO (Nicotiana)
India is the third largest producer of tobacco after China and USA and eighth largest exporter of tobacco. Occupying about 0.25 percent of total cropped area, tobacco accounts for about one percent of the total value of Indian agricultural output. It forms an important item in India's exports.
Two main varieties of tobacco are grown in India:(i) Nicotiana tobacum (97 percent of entire tobacco crop) variety including desi and Virginia tobacco — used for cigarette, cigar, bidis, hookah, chewing and snuff purposes, and (ii) N. rustica (accounts for 3 percent of tobacco production) including vilayati and kalkatia tobacco — used mainly for hookah, chewing and snuff purposes. 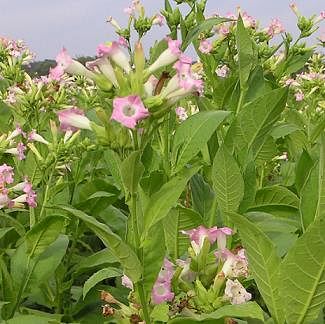 JUTE (Corchorus Capularis)Jute is the most important fibre yielding crop cultivated in India. It is obtained from the inner bark of two important species of jute — Corchorus capsularis and Corchours olitorus— grown in India. The fibre is cheap and has a commercial demand because of its softness, lustre, strength, length, and uniformity in size. It is used for manufacture of gunny bags, carpets, ropes and strings, rugs and clothes, tarpaulins, upholstery, re-inforced plastic, handicraft, paper pulp, geo-textiles etc. Manufactured jute goods earn much foreign exchange for the country. 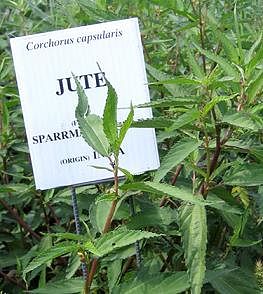 (iii) Humid and moist climate with average humidity of 90 percent and annual rainfall of over 150 cm during the main growing season, incessant and untimely rains and prolonged drought are harmful.(iv) Temperature between, 25C-350C.(v) Plenty of water not only for growing period but also later for retting.When the jute plants mature they are cut and put into pools of stagnant water where the high temperature of water causes retting of plant within 20-25 days. After retting is complete bark is peeled from plant and fibre is then removed from pith. Stripping of fibre is done in water which is then dried and pressed into bales.West Bengal accounts for more than 60 percent of the area and production of jute in the country. Assam, Bihar, orissa, Meghalaya, Tripura and Terai region of Uttar Pradesh account for most of the remaining.

Jute fibre is eco-friendly and biodegradable. In order to produce one tonne of synthetic fibre at least 31 kg of nitrogen dioxide and 12 kg of sulphur dioxide are emitted in air when refined fossil fuel is used; figures may increase even upto 155 kg and 70 kg respectively when crude petroleum is used. Whereas one tonne of jute is produced from only 4 tonnes of friendly biomass and fixes nearly 6 tonnes of carbon dioxide.MESTAMesta fibre, also obtained from two main species Carchorus capsularis and Coliorus, is a close substitute of jute. Besides fibre, mesta is also used in manufacture of paper pulp. Mesta seeds also contain oil which is used for culinary purposes. The oil has good saponification value and hence can be used for soap preparation. Some wild forms of mesta possess fleshy red calyces which are used to prepare jam, jellys and pickles. 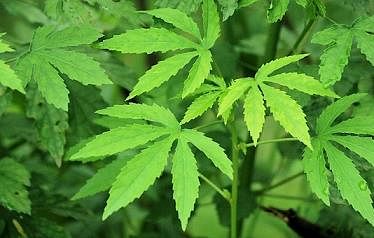 OILSEEDS
The bulk of oilseeds production in India is derived from nine varieties of cultivated oilseeds, viz. groundnut, rapeseed, mustard, sesame, nigerseed, soyabean, sunflower, linseed and castor seed. Among these groundnut and rapeseed/mustard together account for 62 percent of total oilseeds production. Soyabean and sunflower of late have emerged as the oilseeds crops having major growth potential.

OilseedsGujarat is the largest producer of kharif oilseeds while Uttar Pradesh is the largest producer of rabi oil-seeds. The other important oilseed producing states are Andhra Pradesh, Madhya Pradesh, Maharashtra, Rajasthan, Karnataka and Tamil Nadu. Various measures are being undertaken to increase the production of oilseeds. They are — the National Oilseed Development Project (NODR), and Oilseed Production Thrust Project (OPTP). In addition, a Technology Mission on Oilseeds, established in 1986, has been working to harness the best of production, processing and management technologies to accelerate self-sufficiency.

RAPESEED (Brassica Compestris Toria) and MUSTARD (B. Compestris juncea)These produce important edible oils and are also used as condiments for making pickles, for flavouring curries and vegetables. Oilcake of rapeseed is an important cattle-feed. They thrive only in cool climate and area grown as pure rabi crops or mixed with wheat, gram and barley. 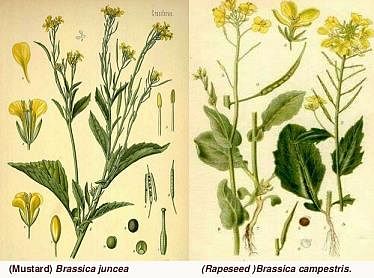 Rapeseed and mustard cropThey are grown on loams; slightly heavier soils favourable for mustard and light ones for rapeseed. India ranks first both in area and production of rapeseed and mustard in the world. In India, the major producer is Uttar Pradesh followed by Rajasthan, Madhya Pradesh, Punjab and Haryana. Assam, Bihar, West Bengal, Orissa, Gujarat and Jammu Kashmir are the other producers.LINSEED (Linun usitatissimum)Linseed oil, due to its drying property, is used in paints, varnishes, printing inks, oil and waterproof fabrics. 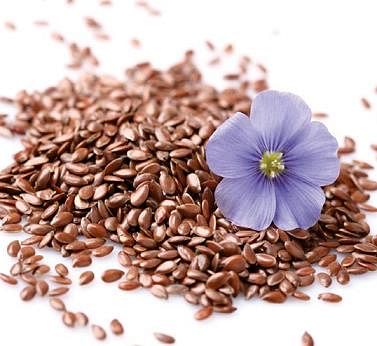 It is also used as edible oil. It can be grown in varied physiological conditions although it prefers cool moist climate with 45-75 cm rainfall. It grows best on clay loams and deep black soils of the peninsula and alluvial soils of Great Plains. The leading producers of linseed are Uttar Pradesh and Madhya Pradesh followed by Maharashtra, Bihar, Rajasthan and West Bengal.SESAMUM (Sesamum indicum)India is the largest sesamum producing country in the world. Its oil is mainly used for cooking, for the manufacture of perfumery and medicines. It is also eaten in fried form and its oilcake is fed to cattle. 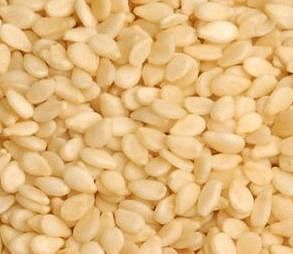 Its cultivation requires a temperature of 210C-230C and a moderate rainfall. It requires well-drained loamy soils. It is widely grown in India, both in Sutlej-Ganga plain and on the Deccan plateau. The important producers are Uttar Pradesh, Rajasthan, Maharashtra, Madhya Pradesh, Orissa, Gujarat, Karnataka, Andhra Pradesh and Tamilnadu.GROUNDNUT (Arachis hypogaea)Also known as peanut, contains 42% oil, mainly used for manufacture of hydrogenated oil. 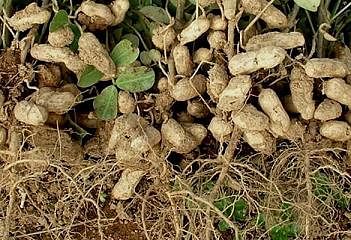 India is the leading producer of groundnut in the world. Its cultivation requires light soil well-drained, sandy loams rich in organic matter, about 75 cm to 85 rainfall, about 200 to 250C temperature and dry weather at the time of ripening. Groundnut is a tropical crop and is extensively grown in peninsular India covering Gujarat, Maharashtra, Tamilnadu, Andhra Pradesh and Karnataka. Rajasthan, Madhya Pradesh, Punjab and Uttar Pradesh are the other producers.CASTOR SEED (Ricinus Communis)The oil from castor seed is used for domestic, medicinal and industrial purposes. The oilcake is used as manure and castor leaves are fed to eri-silkworms. It thrives well in warm and relatively dry climate areas with an annual rainfall of 50-75 cm. 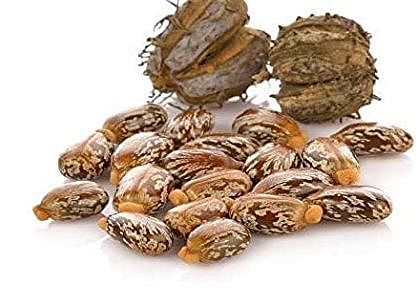 It is usually grown on red sandy loams in peninsular India and on light alluvial soils of Sutlej-Ganga plain. Andhra Pradesh is the largest producer of castor seed, closely followed by Gujarat, Orissa, Karnataka, and Tamilnadu, Madhya Pradesh, Assam and Maharashtra are the other producers.