The document Chapter Notes - Cost (Producer Behaviour and Supply), Class 12, Economics | EduRev Notes is a part of the Commerce Course Economics Class 12.
All you need of Commerce at this link: Commerce

Cost of production : Expenditure incurred on various inputs to produce goods and services.

Money cost : Money expenses incurred by a firm for producing a commodity or service.

Implicit cost : Cost incurred on the self - owned factors of production.

For example, interest on owners capital, rent of own building, salary for the services of entrepreneur etc.

Opportunity cost : is the cost of next best alternative foregone / sacrificed.

Fixed cost : are the cost which are incurred on the fixed factors of production.

These costs remain fixed whatever may be the scale of output. These costs are present even when the output is zero.

These costs are present in short run but disappear in the long run.

Total Variable Cost: TVC or variable cost – are those costs which vary directly with the variation in the output. These costs are incurred on the variable factors of production.

These costs are zero when output is zero. Total cost : is the total expenditure incurred on the factors and non-factor inputs in the production of goods and services.

It is obtained by summing TFC and TVC at various levels of output.

Relation between TC, TFC and TVC Average cost : are the “cost per unit” of output produced.

AFC declines with every increase in output. It’s a rectangular hyperbola. It goes very close to x axis but never touches the x axis as TFC can never be zero.

AVC falls with every increase in output initially. Once the optimum level of output is reached AVC starts rising.

I phase : When both AFC and AVC fall , AC also fall

III phase : AC rises when rise in AVC is more than fall in AVC. 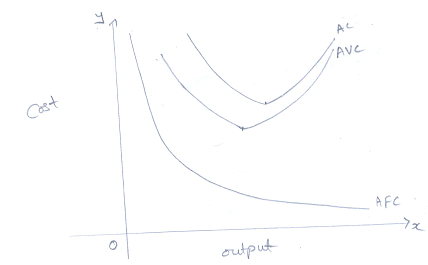 Marginal cost : refers to the addition made to total cost when an additional unit of output is produced.

Note : MC is not affected by TFC.

Relationship between AC and MC Important formulae at a glance