The document Chapter Notes - Matter in Our Surroundings Class 9 Notes | EduRev is a part of the Class 9 Course Science Class 9.
All you need of Class 9 at this link: Class 9

THREE STATES OF MATTERThe three states of matter are the distinct physical forms that matter can take: solid, liquid, and gas. (i) Liquid: A substance that flows and keeps no definite shape because its molecules are loosely packed and constantly moving. It takes the shape of its container but maintains constant volume.

(ii) Gas: A substance that can only be contained if it is fully surrounded by a container (or held together by gravitational pull); a substance whose molecules have negligible intermolecular interactions and can move freely.

(iii) Solid: A substance that retains its size and shape without a container; a substance whose molecules cannot move freely except to vibrate. The three states of matter are the three distinct physical forms that matter can take in most environments: solid, liquid, and gas. In extreme environments, other states may be present, such as plasma, Bose-Einstein condensates, and neutron stars. Further states, such as quark-gluon plasmas, are also believed to be possible. Much of the atomic matter of the universe is hot plasma in the form of the rarefied interstellar medium and dense stars. The states of matter: This diagram shows the nomenclature for the different phase transitions.

SolidsA solid particles are packed closely together. The forces between the particles are strong enough that the particles cannot move freely; they can only vibrate. As a result, a solid has a stable, definite shape and a definite volume. Solids can only change shape under force, as when broken or cut. In crystalline solids, particles are packed in a regularly ordered, repeating pattern. There are many different crystal structures, and the same substance can have more than one structure.
Example: iron has a body-centered cubic structure at temperatures below 912°C and a face-centered cubic structure between 912 and 1394°C. Ice has fifteen known crystal structures, each of which exists at a different temperature and pressure.

Liquids
A liquid is a fluid that conforms to the shape of its container but that retains a nearly constant volume independent of pressure. The volume is definite (does not change) if the temperature and pressure are constant. When a solid is heated above its melting point, it becomes liquid because the pressure is higher than the triple point of the substance. Intermolecular (or interatomic or interionic) forces are still important, but the molecules have enough energy to move around, which makes the structure mobile. This means that a liquid is not definite in shape but rather conforms to the shape of its container. Its volume is usually greater than that of its corresponding solid (water is a well-known exception to this rule). The highest temperature at which a particular liquid can exist is called its critical temperature. 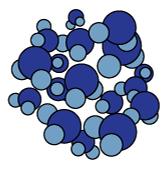 A liquid can be converted to gas through heating at constant pressure to the substance’s boiling point or through reduction of pressure at a constant temperature. This process of a liquid changing to a gas is called evaporation.

GasesGas molecules have either very weak bonds or no bonds at all, so they can move freely and quickly. Because of this, not only will a gas conform to the shape of its container, it will also expand to completely fill the container. Gas molecules have enough kinetic energy that the effect of intermolecular forces is small (or zero, for an ideal gas), and they are spaced very far apart from each other; the typical distance between neighboring molecules is much greater than the size of the molecules themselves. A gas at a temperature below its critical temperature can also be called a vapor. A vapor can be liquefied through compression without cooling. It can also exist in equilibrium with a liquid (or solid), in which case the gas pressure equals the vapor pressure of the liquid (or solid).