REVENUE :: It is MONEY RECEIPT from sale of goods and services. It is also called Sale Proceed.

REVENUE AND PROFIT ARE DIFFERENT CONCEPT

TOTAL REVENUE (TR ) :: It is total MONEY RECEIPT FROM SALE OF GIVEN QUANTITY OF OUTPUT.

⇒ It is thus SUM OF ALL SALES PROCEED. It is the same thing as the total expenditure by the buyers on purchase of the product of the firm.

⇒ Total Revenue is zero at zero level of output and hence it starts from origin and increases with increase in quantity sold.

MARGINAL REVENUE (MR) :: It is ADDITIONAL  RECEIPT from sale of additional unit of commodity

AVERAGE REVENUE (AR) :: It is per unit of money received from sale of a commodity. It is same thing as price of the commodity

⇒ It is called AVERAGE REVENUE CURVE from producer point of view becauseit indicates the average receipts (revenue or income) of the firm.

RELATIONSHIP BETWEEN MR AND TR

(3) TR increases at DIMINISHING RATE MR is POSITIVE BUT DECREASES (4) TR is MAXIMUM when MR is ZERO (i.e MR touches X-axis)(5) TR FALLS when MR is NEGATIVE (i.e below X-axis) 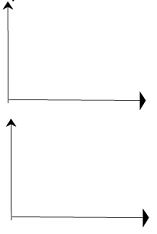 (1) PERFECT COMPETITION { WHEN MORE IS SOLD AT SAME PRICE}

In this market situation there are(a) large number of buyers and sellers and each having a minor share in total quantity brought and sold.(b) Selling Homogenous goods i.e goods of same quality.Example Stock Market

This MAKES PRICE OF GOOD FIXED as no seller can charge high price.Thus a firm or seller is price taker and sells each unit of output at same price, which makes Average revenue equal to Marginal revenue

⇒ Always remember that when a firm is able to sell more output at the same price, then AR = MR at all levels of output , A s a result demand curve (AR curve) is PERFECTLY ELASTIC. THIS HORIZONTAL LINE IS ALSO KNOWN AS PRICE LINE

(2) IMPERFECT COMPETITION {WHEN MORE IS SOLD BY LOWERING THE PRICE}

(a) MONOPOLY :: It is a market situation in which there is a single firm selling the commodity and there are no close substitute of commodity.For example :: Railways owned by GOI.

In both Monopoly and monopolistic, TO SELL MORE  SELLER HAS TO REDUCE PRICE (AR) and we know that when AR is decreasing, MR decreases at a faster rate.

TR INITIALLY INCREASES AT DIMINISHES RATE AND REACHES MAXIMUM POINT, AND THEN DECLINES

When firm can increase their volume of sales only by decreasing the price, then AR falls with increase in sales.It means , revenue from every additional unit (i.e MR) will be less than price (AR)It must be noted that(a) fall in MR is double than that in AR that is FALL IN MR IS TWICE THE RATE OF FALL IN AR

(b) It must be noted that MR can fall to zero and can even become negative. → However AR can be neither zero nor negative asTR it is always positive

RELATIONSHIP BETWEEN AR , MR AND TR

→ TR increases at a increasing rate

→ MR is also constant and parallel to X- axis

⇒ This happens in case of PERFECT COMPETITION

(6) When AR IS DECREASING

⇒ This happens in case of IMPERFECT COMPETITION

(7) AR can never be zero but MR can be zero. TR reaches its maximum point