THROUGH THE EYES OF TRAVELLERS

Q.3 Do you think Al-Biruni depended only on Sanskrit texts for his information and understanding of Indian society?            (2) Ans. Yes, Al-Biruni depended almost exclusively on the work of Brahmanas, often citing passages from the Vedas the Purana, the Bhagavad Gita the works of Patanjali theManusmriti etc., to provide an understanding of Indian society.

Q.4 Name the Plants found in India which amazed Ibn-Battuta.            (2) Ans. Coconut – He wrote that the nuts of coconut resembles a man’s head.Paan – He wrote about Paan that the betel has no fruit and is grown only for the sake of his leaves...

Q5. What was the more complex social reality which Bernier’s notice in the Mughal Empire?            (2) Ans. (i) He felt that artisans had not incentive to improve the quality of their manufacturers because profits were appropriated by the state. Thus production was on the verge ofdecline.(ii) At the same time, he conceded that vast quantities of the world’s precious metals (gold & silver) flowed into India in exporting manufactures.

Q.6 What were the “barriers” discussed by Al-Biruni that obstructed him in understanding India?            (5) Ans. Following were the barriers he faced in understanding India –1. Problems of Language – According to him, Sanskrit was so different from Arabic and Persian that ideas and concept could not be easily translated from one language.2. Difference of religion beliefs and practices – He was Muslim and his religious beliefs and practices were quit different from India.3. Self-absorption and insularity of the local population - According to him the third barrier was the isolation policy of the Indians.

Q7. According to Bernier, What were the evils-effects of the crown ownership of land?          (5)Ans. (1) Absence of ownership of land, landholders could not pass on their land to their children. Thus they didn’t take any interest in increasing production.(2) It prevented the emergence of the “improving” landlords.(3) It led to the ruination of agriculture.(4) It brought a continuous decline in the living standard of all sections of society.(5) It led to the excessive oppression of the peasantry.

Q8. What did Bernier write about the Sati system?          (5) Ans. (i) It was a cruel practice in which the widow was made to sit on the pyre of herhusband alive.(ii) She was forced to be sati.(iii) The people had no sympathy even for the child widows.(iv) The cries of the women going to be a sati did not move anyone.(v) The Brahmans and the elderly women of the house participated in this practice.

Q9. Who wrote ‘Kitab-ul-Hind’? Throw light in its main features?          (5) Ans. The book ‘Kitab-ul-Hind’ was written by Al-Biruni.Its main features are –1. It is written in Arabic.2. Its language is simple and lucid.3. It is written on the subject such as regional, philosophy, astronomy, social life, laws etc.4. It is divided into 80 chapters.5. Each chapter begins with a question and than description have given based in sanskritic traditions.

Q10. Analyze the evidence for slavery provided Ibn-Battuta.          (10) Ans. According to Ibn-Battuta –1. Slaves like any other commodity, were openly sold in the markets.2. They were also regularly exchanged as gifts.3. When Ibn-Battuta reached Sindh, he purchased horses, camels and slaves. He wanted to offer them as gifts to sultan Muhammad Bin Tuglaq.4. When he reached to Multan, he presented salves and horses with almonds and raisins to the Governor of Multan.5. Ibna-batuta says that Muhammad bin Tughlaq was so happy with the sermon of a preacher named Nasiruddin that he gave him”ahundred thousand tankas andtwo hundred slaves.6. The sultan employed female slaves in his service and also to keep a watch on his nobles.7. The slaves were also engaged for domestic work. But they were given low wages.8. Ibn-Battuta found their services particularly indispensable for carrying women and men on palanquins or dola.9. It appears from Ibn-Battuta’s account that there was considerable differentiations among slaves.10. Some female slaves in the service of the sultan were experts in music and dance.

The highest caste are the Brahmana, of whom the books of the Hindus tell us that they were created from the head of Brahman. And as the Brahman is only another name for the force called nature, and the head is the highest part of the ……body, the Brahmana are the choice part of the whole genus. Therefore, the Hindus consider them as the very best of mankind.The next caste are the Kshatriya who were created, as they say, from the shoulders and hands of Brahman.Their degree is not much below that of the Brahmana. After them follow the Vaishya, who were created from the thigh of Brahman. The Sudra who were created from his feet.Between the latter two classes there is no very great distance. Much, however, as these classes differ from each other, they live together in the same towns and villages, mixedtogether in the same houses and lodgings.

2. Do you consider this type of division justified? Explain with reasons.

3. How was the system not quit rigid in the real life? Explain.

In India the postal system is of two kinds: The horse-post called ‘Uluq’ is run by royal horses stationed at distance of every four miles. The foot-post has three stations permit. It is called ‘dawa’, that is, one third of a mile ….. Now, at every third of a mile there is well populated village, outside which are three pavilions in which sit men with girded loins ready to start. Each of them carries a rod, two cubits in length with copper bells at the top. When the courier starts from the city, he holds the letter in one hand and the rod with its bells on the other; and he runs as fast as he can. When the men in the pavilion hear the ringing of bell they get ready. As soon as the courier reaches them one of them takes the letter from his and runs at the top speed shaking the rod all the while until he reaches the next dawa. And the same process continues till the letter reaches its destination. This foot-person is quicker than the horse-post; and often it is used to transport the fruit of Khurasan which are much desired in India.

(i) Name the two kinds of postal System.

(iii) Why does Ibn-Battua think that the postal system in India was efficient?

(iv) How did the State encourage merchants in the 14th century?

(ii) In the postal service on foot, there were three stages. They were called the Dawa. It was one-third part of a mile. There was a village with dense population at a distance ofevery three mile. There were three centres outside it. The people used to sit in these centres to start their work. Each one of them had a long rod having copper bells at its top. Whenever a messenger started his journey, he held the letter in one land and this rod with copper bells in the other hand. He would run very fast. The people sitting in the camps at once got ready when they heard the sound of the bell. As soon as the messenger reached the camp, one of the people would take the letter and run away at full speed shaking the rod. This process continued till the letter reached its destination.

(iv) In the 14th century, the state took special steps to encourage the traders. For example, all the trade routes had serais and rest houses.

Comparative study of the three Travellers of the Medieval Period 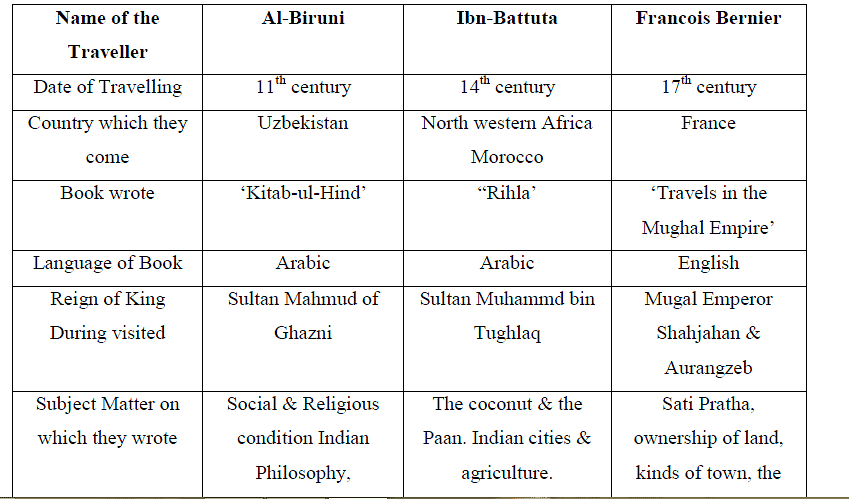