The document Characteristics and Classification of Organic Compounds Class 11 Notes | EduRev is a part of the Class 11 Course Chemistry Class 11.
All you need of Class 11 at this link: Class 11

Acetic acid is the first organic compound synthesised from its elements.

It is the tendency of self combination and is maximum in carbon. A carbon atom can combine with other carbon atoms by single, double or triple bonds. Thus, it forms more compounds than the others.

(b) Tetravalency and small size

Carbon being tetravalent, is capable of bonding with four other C atoms or some other monovalent atoms. Carbon can form compound with oxygen, hydrogen, chlorine, sulphur, nitrogen and phosphorus. These compounds have specific properties depending upon the nature of the element or group attached with the carbon.

Furthermore, these compounds are exceptionally stable because of the small size of carbon.

1. These are the compounds of carbon with H, O, N, S, P, F, CI, Br and I.2. These are generally found in living organisms. e.g., carbohydrates, proteins etc.3. These may be gases, liquids or solids.4. Being covalent in nature, these have low boiling point and melting point and soluble in organic solvents.5. These are generally volatile and inflammable.6. They do not conduct electricity because of the absence of free ions.7. They possess distinct colour and odour. 1. On the Basis of Number of C Attached

On the Basis of Position of Functional Group: 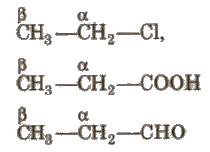 Classification of Organic CompoundThe existing large number of organic compounds and their ever -increasing numbers has made it necessary to classify them on the basis of their structures. Organic compounds are broadly classified as follows: 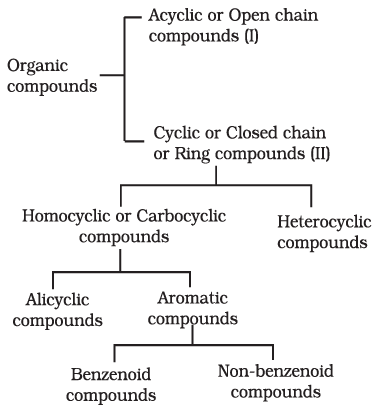 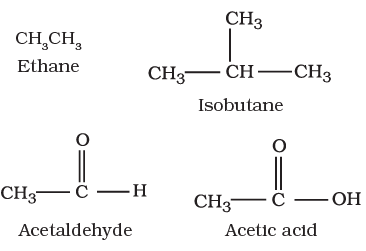 II Alicyclic or closed chain or ring compoundsAlicyclic (aliphatic cyclic) compounds contain carbon atoms joined in the form of a ring (homocyclic). Sometimes atoms other than carbon are also present in the ring (heterocylic). Some examples of this type of compounds are: 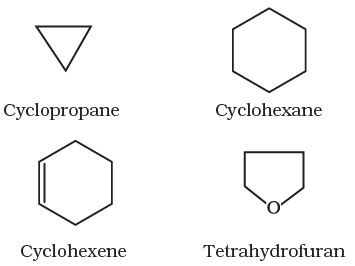 These exhibit some of the properties similar to those of aliphatic compounds.

Organic compounds can also be classified on the basis of functional groups, into families or homologous series.