The document Circular Turning on Roads Class 11 Notes | EduRev is a part of the Class 11 Course Physics Class 11.
All you need of Class 11 at this link: Class 11

Dynamics of Circular MotionWe know that linear acceleration of a particle in circular motion has two components, tangential and radial (or centripetal). So, normally we resolve the forces acting on the particle in two directions: This net force (towards centre) is also called centripetal force.

In most of the cases plane of our uniform circular motion will be horizontal and one of the tangent is in vertical direction also. So, in this case we resolve the forces in: 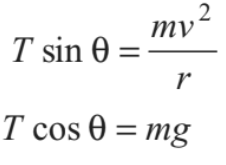 From these two equations, we can find 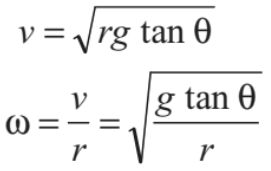 So, the time period of pendulum is

Motion of a Particle Inside a Smooth Cone

A particle of mass ‘m’ is rotating inside a smooth cone in horizontal circle of radius ‘r’ as shown in figure. constant speed of the particle is suppose ‘v’. Only two forces are acting on the particle in the shown directions:

In horizontal radial direction (towards centre), net force is mv2/r

When vehicles go through turnings, they travel along a nearly circular arc. There must be some force which will produce the required centripetal acceleration. If the vehicles travel in a horizontal circular path, this resultant force is also horizontal.

The necessary centripetal force is being provided to the vehicles by following three ways:

2. By Banking of Roads only

3. By Friction and Banking of Roads both.

In real life the necessary centripetal force is provided by friction and banking of roads both. Now let us write equations of motion in each of the three cases separately and see what are the constant in each case.

➢ By Friction Only

Suppose a car of mass m is moving at a speed v in a horizontal circular arc of radius r. In this case, the necessary centripetal force to the car will be provided by force of friction f acting towards centre

Therefore, for a safe turn without sliding  mv2/r ≤ fL

Here, two situations may arise. If m and r are known to us, the speed of the vehicle should not exceed

and if v and r are known to us, the coefficient of friction should be greater than

➢ By Banking of Roads Only

Friction is not always reliable at circular turns if high speeds and sharp turns are involved to avoid dependence on friction, the roads are banked at the turn so that the outer part of the road is somewhat lifted compared to the inner part. 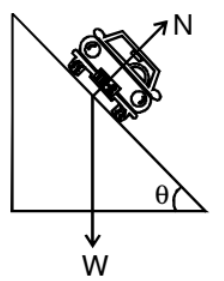 Applying Newton's second law along the radius and the first law in the vertical direction.

from these two equations, we get

➢ By Friction and Banking of Road Both

If a vehicle is moving on a circular road which is rough and banked also, then three forces may act on the vehicle, of these force, the first force, i.e., weight (mg) is fixed both in magnitude and direction. 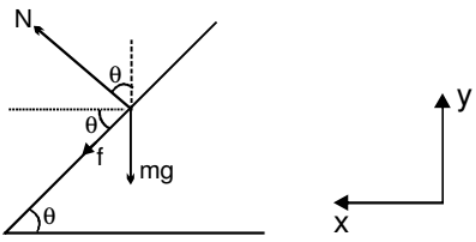 The direction of second force i.e., normal reaction N is also fixed (perpendicular or road) while the direction of the third i.e., friction f can be either inwards or outwards while its magnitude can be varied upto a maximum limit (fL = mN). So the magnitude of normal reaction N and directions plus magnitude of friction f are so adjusted that the resultant of the three forces mentioned above is mv2/r towards the center. Of these m and r are also constant. Therefore, magnitude of N and directions plus magnitude of friction mainly depends on the speed of the vehicle v. Thus, situation varies from problem to problem. Even though we can see that :

(i) Friction f will be outwards if the vehicle is at rest v = 0. Because in that case the component weight mg sinθ is balanced by f.

(ii) Friction f will be inwards if

(iii) Friction f will be outwards if

(iv) Friction f will be zero if Cyclist does not drop down when

Motion of a Cyclist on a Circular Path

Suppose a cyclist is going at a speed v on a circular horizontal road of radius r which is not banked. Consider the cycle and the rider together as the system. The centre of mass C (figure shown) of the system is going in a circle with the centre at O and radius r. Let us choose O as the origin, OC as the X-axis and vertically upward as the Z-axis. This frame is rotating at an angular speed w = v/r about the Z-axis. In this frame the system is at rest. Since we are working from a rotating frame of reference, we will have to apply a centrifugal force on each particle. The net centrifugal force on particle will be Mω2r = Mv2/r, where M is the total mass of the system. This force will act through the centre of mass. Since the system is at rest in this frame, no other pseudo force is needed.

Figure in shows the forces. The cycle is bent at an angle θ with the vertical. The forces are

In the frame considered, the system is at rest. Thus, the total external force and the total external torque must be zero. Let us consider the torques of all the forces about the point A. The torques of N and f about A are zero because these forces pass through A. The torque of Mg about A is Mg(AD) in the clockwise direction and that of Mv2/r is Mv2/r (CD) in the anticlockwise direction. For rotational equilibrium,

Thus, the cyclist bends at an angle

Its magnitude is equal to that of the centripetal force = mv2/r . Centrifugal force is a fictitious force which has to be applied as a concept only in a rotating frame of reference to apply Newton's law of motion in that frame)

FBD of ball w.r.t non-inertial frame rotating with the ball. Suppose we are working from a frame of reference that is rotating at a constant, angular velocity ω with respect to an inertial frame. If we analyse the dynamics of a particle of mass m kept at a distance r from the axis of rotation, we have to assume that a force mrω2 act radially outward on the particle. Only then we can apply Newton's laws of motion in the rotating frame. This radially outward pseudo force is called the centrifugal force.

A simple pendulum is constructed by attaching a bob of mass m to a string of length L fixed at its upper end. The bob oscillates in a vertical circle. It is found that the speed of the bob is v when the string makes an angle θ with the vertical.

The force acting on the bob are (figure) As the bob moves in a vertical circle with centre at O, the radial acceleration is v2/L towards O. Taking the components along this radius and applying Newton's second law, we get

A ball of mass m attached to a light and inextensible string rotates in a horizontal circle of radius r with an angular speed w about the vertical. If we draw the force diagram of the ball. Motion in a Vertical CircleSuppose a particle of mass m is attached to an inextensible light string of length R. The particle is moving in a vertical circle of radius R about a fixed point O. It is imparted a velocity u in horizontal direction at lowest point A. Let v be its velocity at point B of the circle as shown. From conservation of mechanical energy

Now, following three conditions arise depending on the value of u.

The particle will complete the circle if the string does not slack even at the highest point (θ = π). Thus, tension in the string should be greater than or equal to zero (T ≥ 0) at θ = π.  In critical case substituting T = 0 and θ = π in above equation, we get Substituting this value of cos θ in Eq. (i), we get

or we can say that at height h1 tension in the string becomes zero. Further, if u < √5gR , velocity of the particle becomes zero when

Now, the particle will leave the circle if tension in the string becomes zero but velocity is not zero or T = 0 but v ≠ 0. This is possible only when Note: After leaving the circle, the particle will follow a parabolic path as the particle

The particle will oscillate, if velocity of the particle becomes zero but tension in the string is not zero. or v = 0, but T ≠ 0. This is possible when 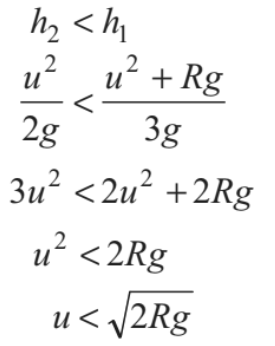 Moreover, if h1=h2, u = √2gR and tension and velocity both becomes zero simultaneously.

This situation is shown in the figure.

Note: The above three conditions have been derived for a particle moving in a vertical circle attached to a string.The same conditions apply, if a particle moves inside a smooth spherical shell of radius R. The only difference is that the tension is replaced by the normal reaction N.