The human body is a complex machine, requiring many processes to function efficiently. To keep these crucial processes running without any hitches, vital elements and components need to be delivered to the various parts of the body. This role of transportation is undertaken by the human circulatory system, moving essential nutrients and minerals throughout the body and metabolic waste products away from the body.

The human circulatory system consists of a network of arteries, veins, and capillaries, with the heart pumping blood through it. Its primary role is to provide essential nutrients, minerals, and hormones to various parts of the body. 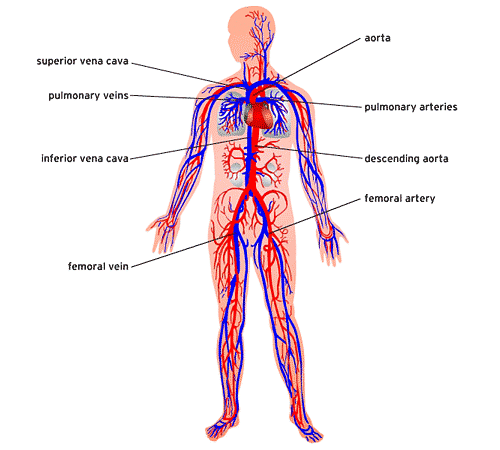 Alternatively, the circulatory system is also responsible for collecting metabolic waste and toxins from the cells and tissues to be purified or expelled from the body.

Position-It is situated in the thoracic cavity, between the lungs slightly on the ventral surface. 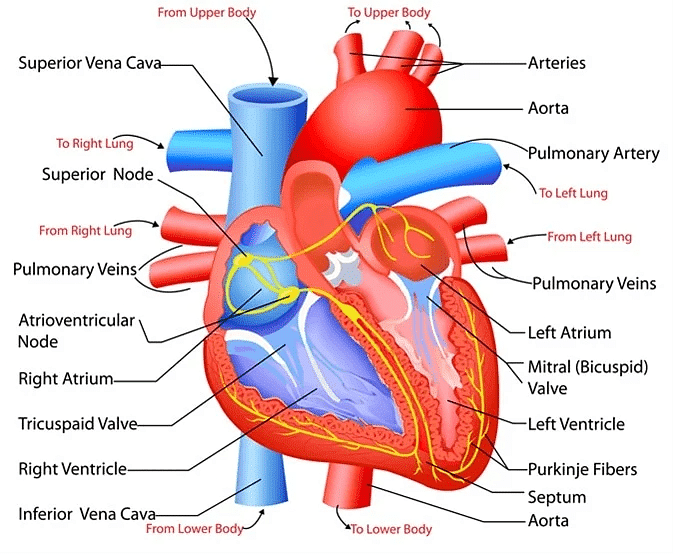 • Heart is enclosed from all the sides by an envelope of two membranes called pericardial membranes (pericardium).

• The narrow space in between these two membranes is called the pericardial cavity. Fluid is present in this cavity, called pericardial fluid.

• It reduces the friction during contraction.

• The human heart is divisible into four chambers.

The External Structure of Heart

• Auricular part of the heart is smaller and its walls are thin.

• It is divided into right and left auricles, by a groove called the inter-auricular sulcus.

• Ventricular part is broad and muscular.

• Ventricles have a thicker wall than auricles.

• The groove which divides the two ventricles is termed as the inter-ventricular sulcus.

The Internal Structure of the Heart

• Partition between auricles and ventricles is known as the auriculo-ventricular septum.

• Deoxygenated blood from the veins of the head, neck and upper limbs enters the right auricle by superior vena cava and from the rest of the body and lower limbs by the inferior vena cava.

• The coronary sinus, which drains deoxygenated blood from the heart muscle.

• From the right auricle blood passes into the right ventricle through a tricuspid valve, (so-called because it has three cusps.)

• Blood leaves the right ventricle through the pulmonary artery. It is guarded by a semilunar valve.

• This artery further divides into right and left pulmonary arteries entering into the two lungs where they further branch into pulmonary capillaries.

• This chamber receives four pulmonary veins, two from each lung from where they bring oxygenated blood.

• The left auricle empties its blood into the left ventricle through a mitral or bicuspid valve.

• Blood leaves the left ventricle by the large, main artery of the body called the aorta.

• The opening from the left ventricle into the aorta is guarded by the aortic semilunar valve.

• Just beyond these, a pair of coronary arteries are present which supply blood to heart muscles.

• This blood is brought back to the heart by coronary veins which join to form the coronary sinus.

Thebesian valve - Present at the opening of the coronary sinus.

Papillary muscles - Present at the tip of columnal carnae.

Chorda tendinae - Arise from papillary muscles and keep the valves in a proper position.

• The heart of the human works like a pump.

• The deoxygenated blood from various parts of the body enters the right auricle through veins and capillaries. 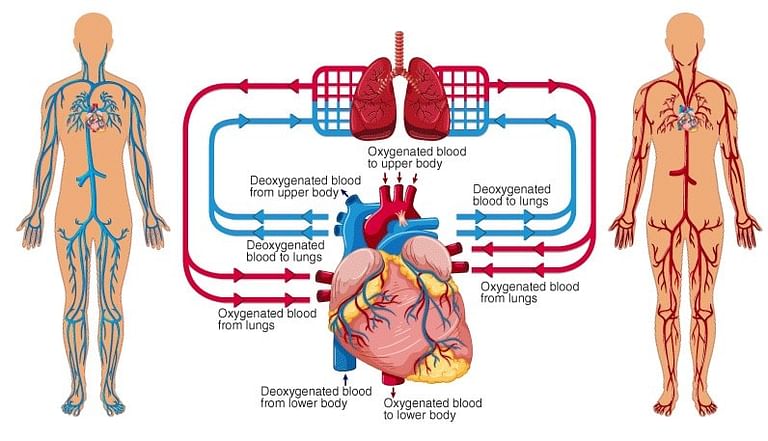 • Now both the ventricles contract simultaneously so the pressure is created on the blood and the valves between auricle and ventricle close and the blood do not go back into the auricle.

• Due to this pressure, the aorta valve opens and the blood comes into the aorta, from here, blood is sent to different parts of the body with the help of various arteries.

• By the contraction of the right ventricle, blood reaches the lungs through pulmonary arteries where it gets reoxygenated.

• The Sinu-Atrial node (SA node) found in the wall of the right atrium, is responsible to initiate and maintain the heartbeat by generating impulses.

• SA node is also known as "Pacemaker" of heart. In some heart patients, the heart does not beat normally. The muscle cells stop functioning. In such patients, a machine called a pacemaker is inserted in the patient's heart, so that heart beats normally.

• Heartbeat in humans is 72 times in one minute.

• Tachycardia: It is the condition where the heartbeat (rate) exceeds 90 per minute for an average adult man.

• Bradycardia: It is the condition where the heartbeat falls below 60 per minute for an average adult man.

• Cardiac Cycle: The sequence of events that takes place during the completion of one heartbeat.

• It is generally felt by placing fingers over the radial artery at the wrist.

• The pulse rate is the same as the heartbeat rate.

• Ist Sound - This is a contraction sound that denotes the beginning of ventricle-contraction. It arises due to the closing of the mitral valve and the tricuspid valve. It is weak and appears in the form of " Lubb " (L - U - B - B)

• IInd Sound - This is a diastolic sound that denotes the beginning of ventricular diastole. This arises due to the closing of the semi-lunar valves and is heard in the form of " Dup".

• These "Lubb" and "Dup" sounds of the heart can be heard with the help of an instrument called " Stethoscope."

• The functioning of the heart can be graphically recorded by an instrument called an electrocardiograph.

• The heart muscles generate electric currents which bring about heartbeats. The electrical changes during heartbeat can be graphically recorded by placing electrodes on the chest above the heart and connecting the electrodes to a sensitive galvanometer with a recording device.

• The graphic recording is called an electrocardiogram (ECG.)

• It was first of all recorded by " Waller"

• "Einthovan" is known as the Father of Electro Cardio Graphy.

There are two types of circulatory system found in animals:-

(i) Open Circulatory System: In this type of circulatory system, the main blood vessels arise from the heart and pour the blood into tissue spaces (sinuses).  e.g. Arthropoda (Cockroach), Echinodermata.

(ii) Closed Circulatory System: In this type of circulatory system, the blood remains only in the blood vessels and is carried to the various organ through vessels and capillaries.  e.g. Human beings, Annelida (Earthworm), some molluscs. 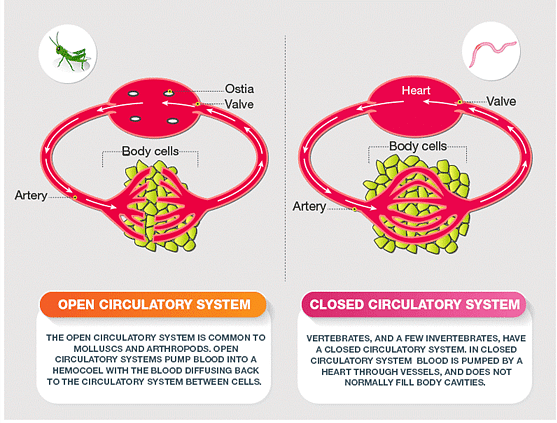 In human beings, the circulatory (transport) system is divided into two systems:

Blood is an important fluid conducting tissue, which transports the materials to different body parts. 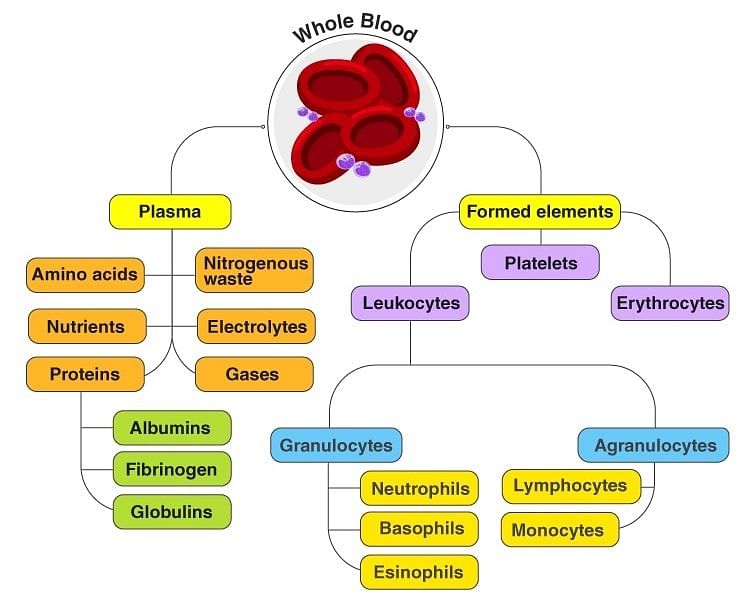 1. Transportation of oxygen from lungs to tissues.

2. Transportation of carbon dioxide from the tissues to the lungs.

3. Transportation of excretory material from the tissues to the kidneys: Some of the chemical activities in the body form nitrogenous end products, like urea, that are poisonous. These substances diffuse into the capillaries and are carried by plasma. When they eventually reach the kidneys, a large proportion of them is removed and excreted.

4. Transportation of digested food from the small intestine to the tissue.

5. Distribution of hormones and enzymes.

7. Distribution of heat and temperature control: Muscular and chemical activities release heat. The heat so produced is distributed locally all around the body by the blood and in this way, an even temperature is maintained in all body regions.

8. Prevention of infection and wound healing: WBCs in the blood help in wound healing. Bacteria are destroyed by the WBCs before they can enter the general circulation. Also, the WBCs provide a defence to the body against disease germs and foreign substances. 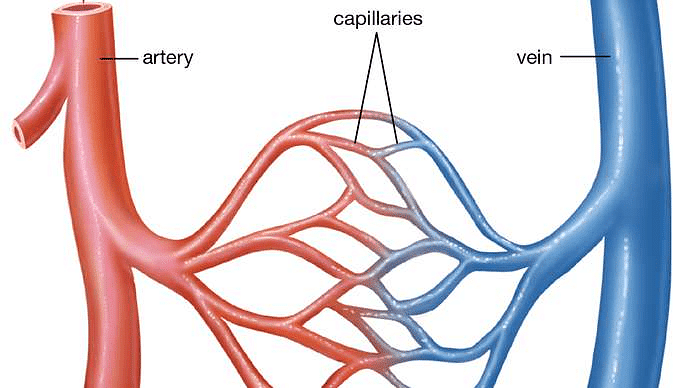 1. Arteries: The vessels which carry blood from the heart to various organs of the body.

2. Veins: They collect the blood from different parts of the body and pour it into the heart.

3. Capillaries: These are the smallest blood vessels and one-cell thick.

The major differences between various blood vessels have been given in Table. 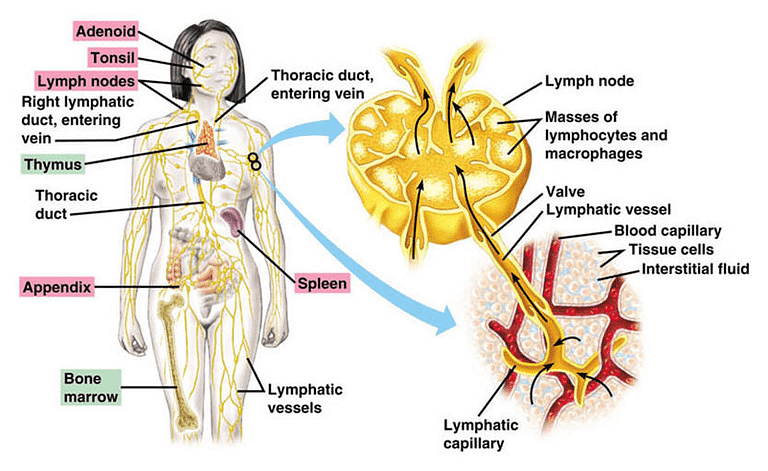 The document Transportation in Human Beings: Circulatory System & The Human Heart Notes | Study Science Class 10 - Class 10 is a part of the Class 10 Course Science Class 10.
All you need of Class 10 at this link: Class 10
Join Course