Citizenship is the status of a person recognized under law as being a legal member of a sovereign state or belonging to a nation.

Citizens of India have the following rights under the Constitution which aliens shall not have: 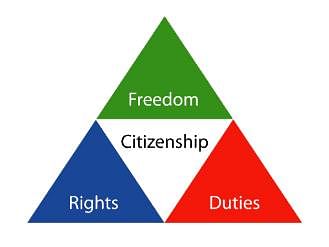 All the above rights are denied to aliens whether they are friendly or enemy. But enemy aliens suffer from a special disability; they are not entitled to the benefit of Art 22 relating to arrest and detention.

An enemy alien includes not only the subjects of a state but also Indian citizens who voluntarily reside in or trade with such a state.

Citizenship at the commencement of the Constitution

At the commencement of this Constitution, every person who has his domicile in the territory of India and:

Rights of citizenship of certain persons who have migrated to India from Pakistan.

Notwithstanding anything in article 5, a person who has migrated to the territory of India from the territory now included in Pakistan shall be deemed to be a citizen of India at the commencement of this Constitution if:

Rights of citizenship of certain migrants to Pakistan

1. If any foreign territory becomes a part of India, the Government of India specifies the persons who among the people of the territory shall be the citizens of India

2. Such persons become the citizens of India from the notified date

Q. Which of these statements are correct?

Hence, Option C Both 1 and 2 is the correct option.

Continuance of the rights of citizenship

Parliament to regulate the right of citizenship by law

Part II of the Constitution

Part II of the Constitution simply describes classes if a person living in India at the commencement of the Constitution, i.e. 26th January 1950, and leaves the entire law of citizenship to be regulated by legislation made by the Parliament.

The prescribed authority may, on application, register as a citizen of India, any person who is not a citizen by virtue of the Constitution or the provisions of the Citizenship Act.

This mode of acquiring citizenship is available to any of the following categories:

Citizenship by naturalization can be acquired by making an application in the prescribed manner. The qualifications for naturalization are the following:

Try yourself:Consider the following statements.
1. If an Indian citizen voluntarily acquired citizenship of another country, his Indian citizenship automatically terminates
2. This provision does not apply during the war in which India is engaged

Q. Which of these statements are correct?

Thus, we can say that Citizenship in India can be terminated only when a citizen acquires citizenship of another country. It cannot be terminated during emergencies or war.

(e) By Incorporation of Territories:

If any new territory becomes a part of India, after a popular verdict, the Government of India shall specify the person of that territory to be a citizen of India.

The Citizenship Act, of 1955 also lays down three modes by which an Indian citizen may lose his/ her citizenship. These are renunciation, termination, and deprivation.

It is a voluntary act by which a person, after Requiring the citizenship of another country, gives up his Indian citizenship. This provision is subject to certain conditions.