Based on your understanding of the passage, answer ANY FIVE questions from the six given below.Q.1. What does the writer mean by calling handicrafts a ‘valued tradition’?

Q.2. Rewrite the following sentence by replacing the underlined phrase with a word that means the same from lines 4-9.If it continues, the workcation (work + vacation) trend will be a powerful boost to domestic tourism operators failing to make progress in the economic slump caused due to the pandemic.

Q.3. State any two reasons why artisans are choosing to work via machines rather than handcrafted tools?

Q.4. Why do the artisans need to be ‘lured with incentives’ to impart handicrafts training?

Q.5. List one likely impact of the support of government and private sectors towards the culture of making handicrafts.

Q.6. How does the writer justify an artist’s act of abandoning her/his traditional craft for a more lucrative option?

II. Read the following excerpt from a case study titled Impacts of Festivities on Ecology.           [5 Marks]

On the basis of your understanding of the passage, answer ANY FIVE questions from the six given below.Q.1. Why do the researchers call pollution the ‘flip side’ of festivals?

Q.2. Comment on the significance of the second objective of the study with reference to lines 6-10.

Q.3. Justify the researchers’ recommendation for limiting the drastic impact of festival pollution on the environment with reference to lines 14-17.

Q.4. Why do the researchers feel that environmental groups and eco-clubs are fighting a losing battle in the given scenario?

Q.5. Even though a larger number of people say ‘no’ to bursting crackers than those who say ‘yes’, festival pollution persists. How does evidence from Table 1 support this statement? 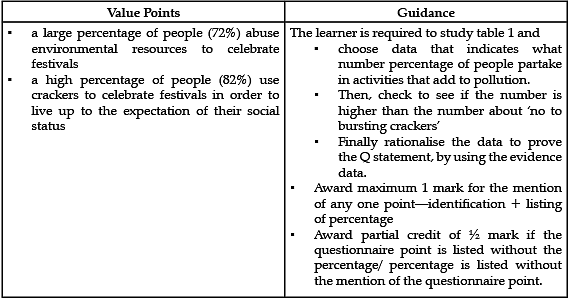 Q.6. What purpose does the ‘Can’t Say ’ column serve in the questionnaire (table 1)?

Q.1. As a health conscious person, you have noticed an advertisement in a newspaper on yoga classes in your neighbourhood. Write a letter in 100-120 words to the Organiser, Yoga for Public, R.K. Puram, New Delhi requesting him/her to send you information about the duration of the course and other relevant details. You are Shweta/Srikar of 15, R.K. Puram, New Delhi.

New Delhi7 August 20××The OrganiserYoga For PublicR.K. PuramNew DelhiSubject : Enquiry About the CoursesRespected SirWith reference to your advertisement in ‘The Times of India’ dated 5 August 20xx, I would like to tell you that I wish to join the yoga classes organised by you. Kindly furnish the following details :

I am awaiting an early reply from your end so that I may join as early as possible.Thank youYours sincerelyShweta

Q.2. The chart below displays data about the number of digital devices purchased in Rishu nagar across the years 2016-2020. Write a paragraph analyzing the given data.

Purchase of Digital DevicesAccording to the given data, a large number of digital devices was purchased in Rishu Nagar across the years 2016-2020. The data indicates that more smart phones were purchased in 2016 as compared to the computers which numbered approx - 35,000 in 2016. There was a gradual rise in the purchase in 2017 when the number of smart phones rose to 60,000 and computers to 59,000.  The trend suddenly changed and a sharp rise was seen us. The purchase of computers in 2018 which again dropped to approx. 45,000 in 2019. The year showed a decline in the purchase of smartphones as well. But the year 2020 brought hope and cheer for the sellers when there was again an upward trend in both smartphones and computers. To sum up it can be said that the purchase of digital devices across these fire years showed the incline of people towards the hi-tech devices.

(IV) The following paragraph has not been edited. There is one error in each line. Identify the error and write its correction against the correct blank number. Remember to underline the correction.

(V) Read the given conversation below and complete the passage that follows. 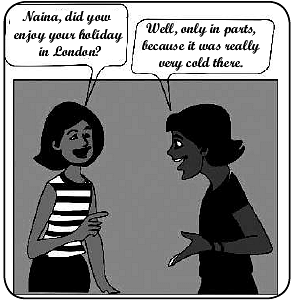 Valli's favourite pastime was to watch the bus that travelled between her village and the nearest town.

Q.2. How did the baker become synonymous with celebrations and occasions in Goa?

The village baker was very important for festive occasions. Marriage gifts were meaningless without the sweet bread known as ‘bol’. Sandwiches, cakes and bolinhas were a must for Christmas as well as other festivals. These were made with the bread.

Q.3. Why was Sinclair Lewis beaten up?

He was beaten because he went to serve summons to the victims in dark and shadowy corners of the city to appear as witness in court which they disliked.

Q.4. Do you find ‘The Tale of custard the Dragon’ to be a serious or a light-hearted comedy? Give reasons to support your answer.

‘The Tale of Custard the Dragon’ is a humorous, light hearted poem as the characters display behavioural attributes, contrary to their appearance as well as nature. It is extremely funny to imagine a fierce looking dragon crying for a safe cage or mouse raging like a lion.

Q.5. Do you think Bholi's father would have agreed to the match if her mother hadn’t insisted upon it? Why/why not?

No, he wouldn’t have agreed to it. In the story, Ramlal is shown to be a concerned and loving father who had immense love for his youngest daughter. Even though he confronted his wife and warned her to marrying off Bholi to Bishamber but it was his wife who insisted on her getting married to this old man.

Q.6. How would you characterise the speaker in the poem Amanda!’? List any two qualities, supporting the reason of your choice, with evidence from the poem.

The speaker i.e. Amanda’s mother is very caring and concerned towards Amanda. So much so that she has rather become over protective. Amanda’s careless attitude has made her worry for her future. She wants to teach Amanda all the rules of proper social conduct lest people should blame her for nagging Amanda.

Q.7. How did Kisa Gotami realize that life and death is a normal process ?

Kisa Gotami’s only son had died. She went to Buddha to seek some medicine to revive her son. The Buddha asked her to bring some mustard seeds, from the house where there had been no death ever, but Gotami could not find any such house. Thus she realised that death is inevitable for every mortal being. Cycle of life and death is a normal process.

(VII) Answer ANY TWO of the following in about 120 words each.                        (Marks 4 × 2 = 8)Q.1. Natalya and Ivan argued about the ownership of Oxen Meadows and the superiority of their respective dogs in the play, The Proposal.Imagine yourself as the playwright of the play. Based on your understanding of the personality traits of Natalya and Ivan, write a dialogue based on an imaginary event, showcasing another argument between them.

Natalya: Oh my God! Did I hear you right when you called my mother 'hump backed'?

Lomov: Yes, Of course! She was hump-baked

Natalya: And what do you have to say about your family? It's so mean of you talking like that. Your head is swirling, you're seeing stars in front of your eyes and even then you're talking ill of my family!Lomov: Don't start another fight. Never mind about me, I'll be all right in some time but your mother wasn't able to do any thing about it.Natalya: Yo u are getting on my nerves! Ivan. Another word and I will throw you out of the house.

Lomov: It is the only thing I can expect from such an ill-mannered lady like you Hugh!

Monday, October 19, 2021SCIENCE IS LIFEIt’s true that above line is telling us about the significance of Science in our lives. It indeed is our life, the be all and end all of our existence on this very special planet mother earth. Many scientific discoveries and inventions have changed the course of our life, from a food gatherer man became a food producer; it’s all thanks to the greatness of Science. It has revolutionised the entire world around. No man is left free without his dependence on scientific inventions and discoveries. So, we can say truly ‘Science is life’.

Q.3.  What lesson did Kisa Gotami learn the second time that she had failed to learn the first time?

Kisa Gotami was devastated by the death of her only son and wandered door to door, seeking help. Someone directed her to Sakyamuni, the Buddha, who asked her to bring a handful of mustard seeds. This raised a hope in Gotami’s heart that her son could be revived. But the condition imposed by Sakyamuni was that the seeds should be from a house where people had not lost a loved one to death. Kisa Gotami’s futile search made her realize the bitter truth that sorrows are a part and parcel of life and one can attain peace only by acceptance.Buddha says that everything in this world is subject to death. He further says that the world is deeply affected by suffering, disease or pain. Inevitably there is death and decay, therefore the wise do not grieve, knowing the terms of the world. Neither from weeping nor from grieving can anyone obtain peace of mind.