Based on your understanding of the passage, answer ANY FIVE questions from the six given below.Q.1. What kind of chaos follows a decision, according to the passage?

According to the passage, by the time, an order is restored and a decision is arrived at, tempers rise, feelings are injured and there is at least one person grumbling.

Q.2. Why is it important for every member of the family to have a say in every decision?

It is important for every member of the family to participate in decision making as it promotes a sense of togetherness and bonding.

Q.3. What do children prefer these days?

Now-a-days, children prefer to go with the flow and they question choices.

Q.6. What message does this passage convey?

Q.1. Why is there no stripe on the pure white tiger?

There is no stripe on the pure white tiger due to the presence of double recessive allele in the genetic code.

Q.2. Which factors have led to the tiger species fall in the category of endangered species?

The tiger species has fallen in the category of endangered species because of habitat loss, poaching, expansion of human population and genetic inbreeding.

Q.3. Why are the tigers hunted?

The tigers are widely hunted for their body parts which are used in traditional chinese medicines.

Q.5. What does the visual given about depict about the number of tigers?

The visual given above depicts an encouraging picture as it shows an increase in the number of tigers.

The hard work of World Wildlife Federation, defenders of wildlife and many other organisation which are working with the support of government to protect the endangered tiger species has contributed to the increase in the number of tigers from 2006 to 2018.

Q.1. Your school has decided to take part in half marathon organised by an NGO in New Delhi. Write a letter in 150-200 words to the Area Manager of the NGO requesting permission to participate in the half marathon on 28 April starting from National Stadium. Request the NGO to provide your school with 200 T-shirts for boys and girls aged 15-17 years. You are School Captain, Manish Mehta, Sarvodaya Vidyalaya, Saket.

Subject : Permission to Participate in the upcoming Half-MarathonSirIt is a matter of great pleasure that authorities of our school have decided to take part in the halfmarathon organised by your reputed NGO. As the noble purpose of this marathon is to create awareness for ‘Clean City, Green City’, it will be our honour if you grant us permission to be a part of and support this noble cause.Further I’d make a request to provide us 200 T-shirts for the boys and girls of our school, who are aged 15-17 years. I hope, we’ll receive the above mentioned consignment, along with the permission letter within this week so that the students may reach the National Stadium on April 28, at 5:30 a.m. sharp to join the marathon. We shall be highly obliged.Thank youYours sincerelyManish Mehta (School Captain)

Q.2. A survey was conducted by a school to discuss the role that Information Technology/Computers play in the growth and development of children. The data is given below in the form of a pie chart. Analyze the data in 100-120 words.

INFORMATION TECHNOLOGY V/S CHILDRENA survey was conducted by XYZ school to discuss the role played by Computers and Information Technology in the growth and development of children. Only a margin 8% of the people opined that computers enhance creativity thus showing that they were not in favour of it. As many as 10% people believed that computers cause eye strain due to long sitting hours of children in front of it where as 12% people were of the opinion that children get access to so many sites that are inappropriate for their age. In fact 30% people, believed that Information Technology increases knowledge and helps in the growth and development of a child as compared to 25% people who were of the view that computers attract a child towards itself which results in the reduction of their outdoor activities. Very few people (15%) had the opinion that it helps academically. Hence, we can sum up that 53% of the people were in favour of computer usage by children where there were still 47% who did not favour it.

(IV) The following passage has not been edited. There is an error in each line against which a blank has been given. Write the incorrect word and the correction in your answer-sheet against the correct blank number. Remember to underline the word that you have supplied.              [3 Marks]

Two friends Sumit and Rahul were going home after school. Taking a bite at his bar of chocolate, Sumit said (a) _______ to go to Harvard. Rahul was duly impressed to hear this and said (b) ________. In his typical style Sumit replied that his father would have to work hard.

(a) When he grew up, he wanted(b) that he would have to study really hard 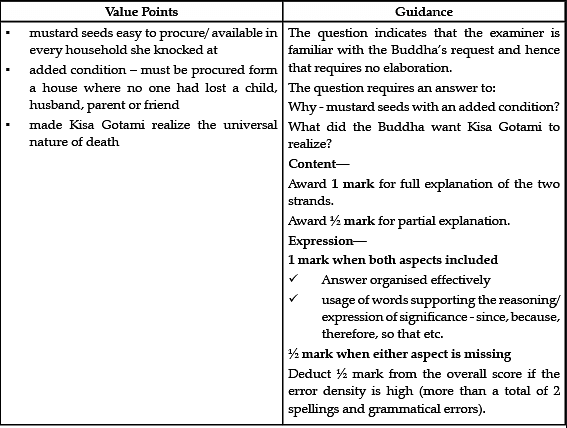 Q.2. Justify how ‘Animals’ by Walt Whitman is a criticism of mankind and its ways? 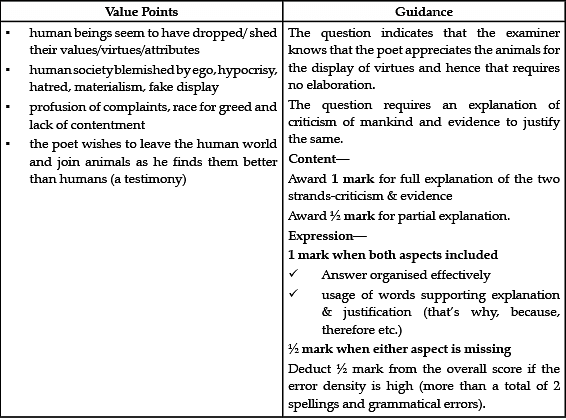 Q.3. Comment on the tone of the speaker when she says ‘Will you please look at me when I’m speaking to you, Amanda!’. 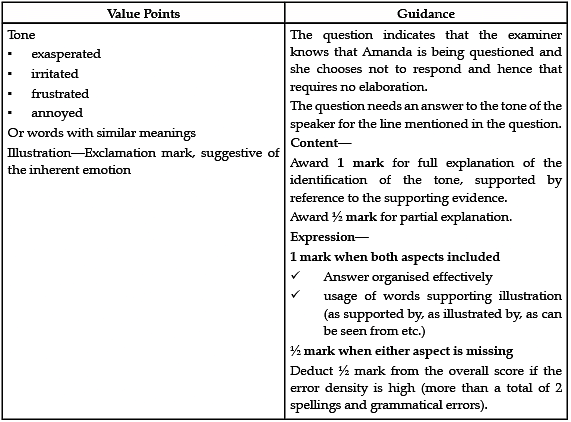 Q.4. A ballad includes the telling of a tale as well as a surprise ending. Using evidence from the poem, explain how these features are included in ‘The Tale of Custard the Dragon’. 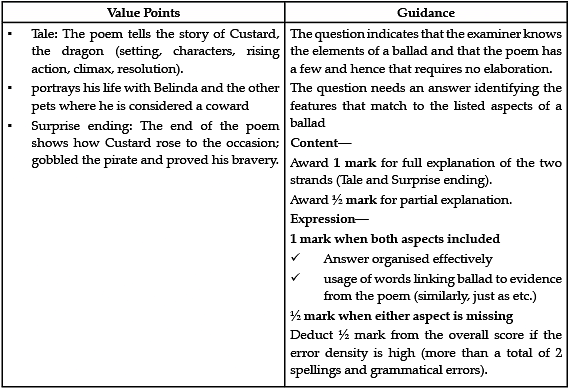 Q.5. Which two issues about himself convinced Lomov of his decision to get married? 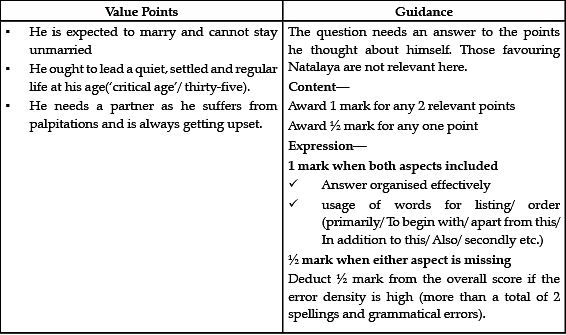 Q.6. Briefly state how Matilda invited ‘a dreadful life of necessity ’ into her family. 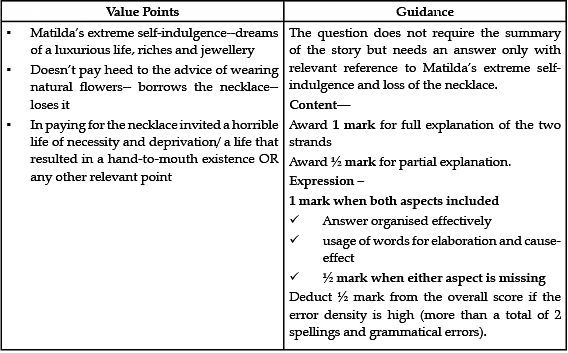 Q.7. The hack driver successfully trapped the narrator in his web of words. Comment. 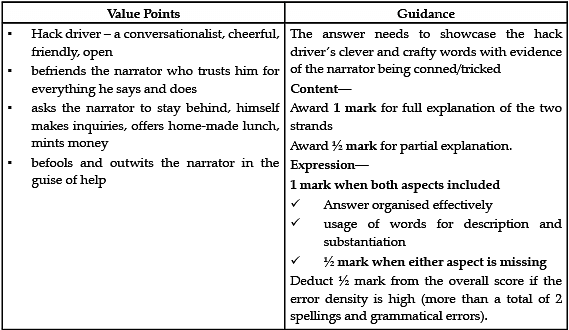 Q.1. Parents play a crucial role in the upbringing of their children. Critically examine the parents of Bholi and Ebright, highlighting their impact on their children’s lives.

Value PointsStudents may draw upon the following:

Q.2. Pranjol and Rajvir discuss their next vacation destination. They shortlist Coorg and Goa. Rajvir is keen on Coorg and tries to convince Pranjol. Develop a conversation between the two, based on your understanding of Glimpses of India.You may begin like this:Rajvir: Hey Pranjol! I think we should be visiting Coorg. It is a beautiful place with coffee plantations. I can smell the aroma already!Pranjol: We visited a tea plantation last year, in Assam; I want to…

Q.3. Farce is a kind of comedy which includes situations and dialogues that are ridiculous, exaggerated and even absurd. Evaluate the play, The Proposal, as a farce.

Students may draw upon the following: