Based on your understanding of the passage, answer ANY FIVE questions from the six given below.Q.1. Why has ‘living on the edge’ become popular?

Living on the edge has become popular due to the constant need for something new or different. One thinks that it is exciting to live life on the edge.

Q.2. What things are important for a disciplined life?

Exercising self control, self-discipline and establishing boundaries and borders in our lives are important for a safe and disciplined life.

The phrase ‘potentially harmful circumstances’ refers to circumstances that can be possibly dangerous. Such circumstances occur when  we avoid little choices such as wearing a seat belt.

Q.4. What is the message conveyed in the last paragraph of the passage?

The message conveyed in the last paragraph is that of ‘Be yourself ’. Each one of us needs to be exactly the way we are and we don’t have to apologize for it.

Q.5. Find the word from the passage which means the same as ‘temporary ’?

The two colloquial words used in the passage are 'yeah' and 'Woo-hoo'.

Q.1. What did the World Tourism Organisation of the UN, in an observation, share?

The World Tourism Organisation of the UN, in an observation, shared that countries with upcoming economies shall see maximum tourist footfall from all over the world in the next decade.

Q.2. List any one of the elements that is important to eco-tourists on trip?

One of the elements that is important to eco-tourists on trip is wild and untouched surroundings.

The inherent qualities of geo tourism are to promote landscape appreciations and include being environmentally responsible.

Q.4. What did the market profile of the eco-tourist reveal about the education aspect?

The market profile of the eco-tourist revealed was no more limited to the small group of highly educated travellers.

Q.5. What did the survey clearly depict about the age range of eco-tourists?

If clearly showed that the age range of eco-tourists changed with the monetary requirements for the trips.

Q.6. Who isn’t an experienced eco-tourist?

A person who is yet to travel even once as an eco-tourist isn’t an experiment eco-tourist.

Q.1. You are Neeti/Rajan, a resident of 25/42, civil Lines, Kanpur. You are very much inspired to watch reality shows on dance at various channels on T.V. and wish to join dance classes to learn ‘Salsa’. Write a letter in about 120 words to Shamak Dawar (Salsa Guru), Director, S.D. Group, Model Town Delhi, enquiring about the dance classes, timings, fees, duration, conditions for admission, etc.

25/42, Civil Lines,Kanpur.December 08, 20XXMr. Shamak DawarDirector, S.D. GroupDelhiSubject : Enquiry about dance classesSirThis is with reference to the dance classes offered by your renowned institute. I am a student of class X and very much interested in dancing. I have come to know about your institution which provides various courses on dance. It is well known that as a master you have trained various film and TV artists.I would like to know the details of all the dance courses offered by your institution. I also want to know about the timings, the fees and duration of dance classes and please let me know if you have a cab facility for picking up the students living at a long distance from the institution.  I am attaching a self addressed envelope and a demand draft numbered 1234xxxx of Rs 1000 with this letter.Please send the prospectus of your institution, I will be very grateful to you if you teach me 'Salsa' and other western dances. Hoping to receive a quick reply as soon as possible.Thank youYours sincerelyNeeti.

Q.2. Read the following excerpt from an article that appeared in the magazine section of a local daily: The ban on single-use plastic is impractical. The purpose of articles like bags and packaging is ultimately to make human life easier. Plastic articles do this well, so they shouldn’t be banned.Write a paragraph in about 120 words to analyze the given argument. You could think about what alternative explanations might weaken the given conclusion and include rationale / evidence that would strengthen / counter the given argument.

Ban On PlasticSingle use plastic causes more harm to the environment than benefitting it. Its toxic contents are harmful for all whether they are human beings, animals or marine creatures. In fact they cause a decline in the healthy state of those also who produce it as it leads to many illnesses. The government has decided to put a blanket ban on single-use plastic articles which is a wise step. It is going to be helpful for our environment which is in a declining state everyone must join in this campaign to save our planet and to make it pollution free. More of environment friendly products should be used. The ban on these products is not impractical. There is no denying the fact that these products make our life easier but we should come up for the welfare of all and not be selfish. The ban will be useful in the long run. 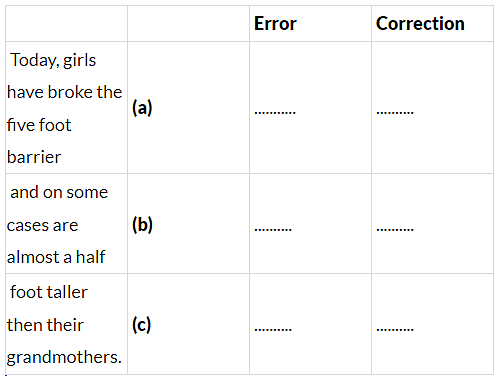 (a) that those caps didn’t fit him.(b) to wear them on the tip of his fingers and they would fit him.

Death is omnipotent, inevitable and looming. It is often referred to a ‘equalizer ’ because it is equal to all for all kind of people. It has to come when it will come. So we shouldn’t fear it.

Q.2. A misanthrope is a person who dislikes humankind. Do you think the poet, Walt Whitman, is a misanthrope? Provide a rationale to support your response.

Walt Whitman perfectly suits to be a misanthrope because he loves animals and feels that human beings are losing that essence of good values in the rapid process of civilization. He hates them and worries for them.

Q.3. Richard’s mother was his companion and spent a lot of time with him. A parent should try to be a companion to a child. Justify.

Yes, Richard’s mother was his true friend who helped him in all steps of life to become the world’s greatest scientist. It is necessary to be a friend to a child than be parents. As a friend, we can understand his problems that he is facing in a better way because we have also gone through all this in our teenage years.

Q.4. “The Lomovs and the Chubukovs have always had the most friendly, and I might almost say the most affectionate, regard for each other.” How would  you evaluate  Lomov and  Chubukov’s  relationship  as neighbours?

Lomov and Chubukov are neighbours. They had good relations in the past. Both the families had respect and affection for each other. They have a controversy on the issue of ownership of the Oxen meadows. They also have a difference of opinion on the superiority of the breed of their dogs. Lomov wants to resolve the issue and visits Chubukov with a proposal which is accepted by Chubukov and both Lomov and Natalya got married.

Q.5. The poem The Tale of Custard, The Dragon is a light-hearted ballad with a powerful message. If the poem was written in any other style, do you think it would have created the same effect on readers? Justify your response with reason(s).

Generally, ballads are tales of adventures and heroism. In the poem, the poet does present the encounter of Custard, the dragon and the pirate in a typical spirit of a ballad . Hence, no other style would have created the same effect on readers other than a ballad.

Q.6. How did you feel when you read about Bholi being ignored and ill-treated by her parents as a child?

It really feels sad that a simpleton like Bholi who was so good at heart was ill-treated by her parents. Bholi was a gem of a person who deserved much better treatment from her loved ones. All she needed was love and care.

Q.7. The poet has an exaggerated and idealized perception of animal life. Do you agree? Why/Why not?

I don’t think that the poet has an exaggerated and idealized perception of animal life because all the points mentioned by him in the poem are true about animals. He has not fabricated any of it. For example– The animals never sweat and whine about their condition. That is so true and real.

Matilda Loisel was very pretty. She considered herself to be born for a luxurious life but the reality differed from her dreams. In reality, she was married to a petty clerk and had to lead a very simple life. Her fantasy and over ambitiousness made her unhappy. Matilda’s desire to belong to the rich and affluent section of society was responsible for her downfall. If she had accepted her condition with a smile and without any complaints, she would not have to live ten long years of her life in such object poverty.

Q.2. Which qualities of animals has the poet lost and now wants to regain? Answer with reference to the poem, ‘Animals’.

The poet Walt Whitman in his poem ‘Animals’ compares animals to human beings and differentiates between them on the basis of their characteristics. According to the poet’s perception, animals are ranked much higher than humans. Animals do not complain about their situation and are much happier than humans. Animals live in natural surroundings and they accept nature. Human beings on the other hand, do not accept nature i.e., they complain about it and try to change it, thereby leading an unhappy life. According to the poet, animals possess many qualities which humans don’t. Some of these are calmness, lack of greed and the ability to stay happy and contented among others. Animals never weep for their sins, they never sweat and whine about their condition. They do not make anybody sick discussing their duty to God. Above all, human beings suffer from the mania of possessing things which animals do not. These are the qualities of animals which the poet feels he as a human has lost and wishes to regain.

Q.3. The will to win, for the right reason, was a quality that Richard had. Do you think this quality alone can help us accomplish great feats? Why/ Why not?

Yes, the will to achieve the impossible is a unique feature in only those individual who like to do something different for the society. Richard Ebright was a bright student in his school days, who always wanted to reach heights in his chosen field. Though many people through his journey of life helped him to achieve this extraordinary feat; but it was his own strong will and determination to sail through this hard journey all alone by himself. Not even once, did he lose his hope in himself and his spirits were always alive to achieve recognition and awards in his very own way.