The document Classification & Nomenclature of Haloalkanes & Haloarenes Notes | Study Chemistry for JEE - JEE is a part of the JEE Course Chemistry for JEE.
All you need of JEE at this link: JEE

What are Haloalkanes and Haloarenes?

Classification of Haloalkanes and Haloarenes

They can be classified on the basis of:

On the basis of the number of hydrogen, they can be divided into mono, di or poly (tri, tetra, and so on) compounds of haloalkanes and haloarenes. It is named depending on the number of halogen atom these compounds contain in their structures. For example,

Haloalkanes may be classified as mono, di, tri, tetra and so on depending on the number of halogen atoms present in their structure.

These compounds can be further divided into three types. They are:

In this class, the halogen atom is attached to an alkyl group. The general homologous formula followed by this class is CnH2n+1X. They are further classified into mainly three types on the basis of the carbon atom to which the carbon-bearing halogen (X) atom is bonded- primary, secondary, and tertiary. This classification is based on the nature of the carbon atom to which the halogen is attached.

3) Compounds Having the sp2 C-X Bond

This class of compounds includes vinyl halides and aryl halides.

These compounds are formed when a halogen atom is attached to an sp2 hybridized carbon atom present next to a carbon-carbon double bond (C=C). 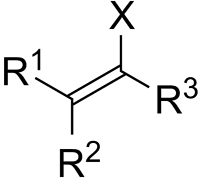 This class of compounds is formed when the halogen group is bonded to an sp2 -hybridized atom of carbon in an aromatic ring.

Try yourself:The compound C6H5F is an example of a ________ halide.
Explanation

In C6H5F, the F atom is directly attached to the sp2 hybridised carbon atom of an aromatic ring, i.e., benzene.

Nomenclature Of Haloalkanes And Haloarenes

There are two names associated with every compound:

Common name: It is different from a trivial name in the sense that it also follows a rule for its nomenclature.

IUPAC name: The IUPAC (International Union of Pure and Applied Chemistry) naming system is the standard naming system that chemists generally use.

The common and IUPAC names of some representative haloarenes are given below: 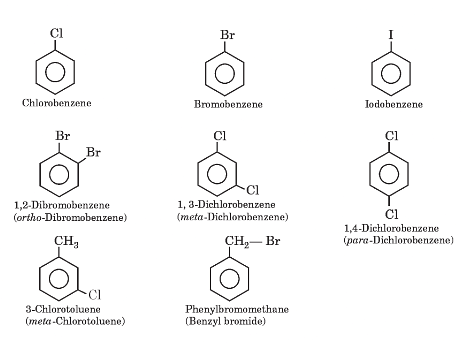 The prefix sym- is used for trihaloarenes with the same halogen atom at alternate positions in the benzene ring (1, 3, 5). The prefixes o-, m- and p- are used for dihaloarenes depending on the relative positions of the two identical halogen atoms on the aromatic ring.

It is essential to understand the nature of the C-X bond because it determines the reactivity of the compound having this kind of bond. The C-X bond is highly polar in nature because halogen atoms are electronegative and the carbon atom is electropositive. The difference in electronegativity results in the withdrawal of electron density from the sigma bond pair towards the halogen atom.

Try yourself:The size of the halogen atom _________ as we go down the group in the periodic table.
Explanation

The common trend within the halogen group in the periodic table is that the size of the atom increases from top to bottom.

The nature of the C-X bond depends upon the bond length between the carbon atom and halogen group. We have previously mentioned that size of the halogen group increases as we move down the group (F < Cl < Br < I). Consequently, the difference in the C-F bond will be the smallest and the C-I bond will be the largest.

The nature of the C-X bond depends upon bond enthalpy order. The size of the carbon and fluorine atom is very similar so the orbitals overlap (2p-2p overlap) into one another. This leads to the formation of a very strong bond. In C-I the atomic size of iodine is very large in comparison to carbon atom so the orbital interaction is very weak.

This results in the formation of weak bond strength. We can conclude that less the bond length stronger will be the bond. Hence, the bond length of C-F is 1.39 A0. The stronger the bond, the amount of energy required increases to break that bond. Therefore, C-F has the highest bond enthalpy. The bond enthalpy order is: C − F > C − Cl > C − Br > C – I

Dipole moment helps to calculate the polarity of a chemical bond within a molecule. It occurs due to the separation of positive and negative charges. It is the product of both charge and the distance between them. Bond dipole (μ) is given by the formula μ = q × d

The order of dipole moment in C-X is CH3Cl > CH3F > CH3Br > CH3I.Dipole moments of haloalkanes are:

Can you notice the abnormal order of the dipole moment in the case where CH3Cl > CH3F? Even though fluorine is more electronegative than Chlorine but the C-F bond (139 pm) is shorter than the C-Cl bond C − Cl (178 pm). Thus, the dipole moment will be lower in the case of CH3F in comparison to CH3Cl.

Try yourself:If X and Y are the carbon-halogen bond enthalpies in chloroethane and bromoethane respectively, what is the relationship between X and Y?
Explanation

View Solution
The document Classification & Nomenclature of Haloalkanes & Haloarenes Notes | Study Chemistry for JEE - JEE is a part of the JEE Course Chemistry for JEE.
All you need of JEE at this link: JEE