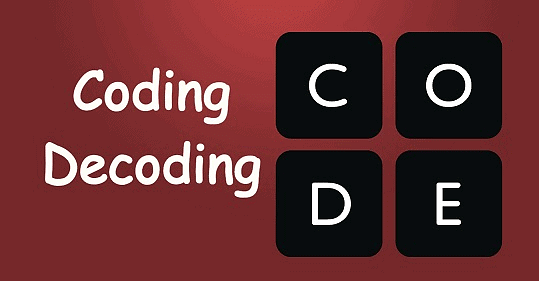 There are a few tips which will help in solving the coding decoding questions:

Let’s revise these tips and tricks with some examples:

Example 1:  In a certain code language:

What will be the code for ‘translate’?

Ans: Correct Answer is Option (b)

Here in this example there are some points to be kept in mind:

Types of Coding-DecodingThough all the methods of coding cannot be identified but still the major formats of coding are as under:

(i) Type 1: Coding Based on Alphabet

Ans: Correct Answer is Option (d)The order of letters has been reversed in the code.Following the coding given above, TRIANGLES will be Coded as SELGNAIRT.

We observe that letters are alternatively moved one place forward and one place backwards and the letter in the middle of the given word is not changed. Based on this observation, we coded the word ‘WONDERFUL’ as ‘VPMEEQGTM’.

Ans: Correct Answer is Option (c)In the coded form the first and the last (ninth) letters have been interchanged so as the second and third, the fourth and the sixth and the seventh and the eighth letters while middle letters (i.e. fifth) is left intact. Thus,

Ans: Correct Answer is Option (b)The place value of all the letters is added up.

Similarly, Calcutta can be coded in the same way as:

Directions: Given two words & to find Code for Third

Based on this information, we draw the table as shown below and find the code for each letter:

‘ITNIETAM’ is code for ‘INTIMATE’, then which of the following words has the code for ‘TREVNIETARBI’?

The letters of the first half and the next half of the code are separately reversed to obtain the word. Thus, we have 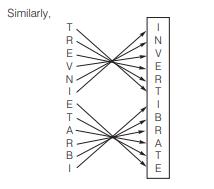 (ii) Type 2: Coding Based on Symbols and Numbers

Question for Coding - Decoding
Try yourself:In a certain code, P is #, A is %, C is φ and E is @. How is PEACE written in that code?
Explanation

Type 3: Coding Based on Renaming

The colour of the milk is white. But the code of white is yellow, so the answer is yellow.

We know that Peacock is the Indian National Bird but here Peacock is known as Swallow. So, the answer is Swallow.

View Solution
Type 4: Coding Based on Group of Words

What does the code ‘di’ stand for?

‘di’ stands for either ‘damaging’ or ‘inherent’.

Example 10: Study the following information carefully and answer the questions given below:The digits from 0 to 9 are coded as shown below with the exceptions that follow:

Ans: Correct Answer is Option (b)

Question for Coding - Decoding
Try yourself:Digits in the numbers are to be coded as follows