Document Description: Collisions for JEE 2022 is part of Physics For JEE preparation. The notes and questions for Collisions have been prepared according to the JEE exam syllabus. Information about Collisions covers topics like and Collisions Example, for JEE 2022 Exam. Find important definitions, questions, notes, meanings, examples, exercises and tests below for Collisions.

Collision between two or more particles is the interaction for a short interval of time in which they apply relatively strong forces on each other. 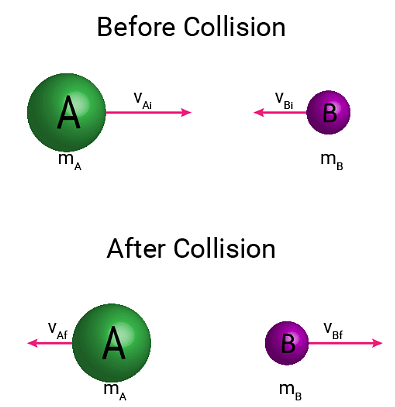 In a collision physical contact of two bodies is not necessary. there are two types of collisions:

The collision in which both the momentum and the kinetic energy of the system remains conserved are called elastic collisions.

In an elastic collision all the involved forces are conservative forces.

The collision in which only the momentum remains conserved but kinetic energy does not remain conserved are called inelastic collisions.

In an inelastic collision some or all the involved forces are non-conservative forces.

Coefficient of Restitution or Resilience

The ratio of relative velocity of separation after collision to the velocity of approach before collision is called coefficient of restitution resilience.

It is represented by e and it depends upon the material of the collidingI bodies.

For a perfectly elastic collision, e = 1

For a perfectly inelastic collision, e = 0

If the initial and final velocities of colliding bodies lie along the same line, then the collision is called one dimensional or head-on collision.

Applying Newton’s experimental law, we have

When masses of two colliding bodies are equal, then after the collision, the bodies exchange their velocities.

If the second body of same mass (m1 = m2) is at rest, then after collision first body comes to rest and second body starts moving with the initial velocity of the first body.

It means the light body will be rebound with its own velocity and heavy body will continue to be at rest.

In Inelastic One Dimensional Collision

In Perfectly Inelastic One Dimensional Collision

Velocity of separation after collision = 0. 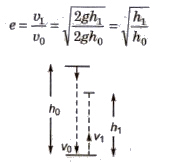 If after n collisions with the ground, the body rebounds with a velocity vn and rises to a height hn then

If the initial and final velocities of colliding bodies do not lie along the same line, then the collision is called two dimensional or oblique Collision.

From conservation law of momentum

The document Collisions Notes | Study Physics For JEE - JEE is a part of the JEE Course Physics For JEE.
All you need of JEE at this link: JEE
Join Course

About this Document
Description
Full syllabus notes, lecture & questions for Collisions Notes | Study Physics For JEE - JEE - JEE | Plus excerises question with solution to help you revise complete syllabus for Physics For JEE | Best notes, free PDF download
Information about Collisions
In this doc you can find the meaning of Collisions defined & explained in the simplest way possible. Besides explaining types of Collisions theory, EduRev gives you an ample number of questions to practice Collisions tests, examples and also practice JEE tests
Join Course
Download as PDF