The document Combinations of Cells Class 12 Notes | EduRev is a part of the JEE Course Physics For JEE.
All you need of JEE at this link: JEE

Example 2. Shown in the figure. Find out the current in the wire BD

Example 3.  Find the current in each wire

Sol. Let potential at point A is 0 volt then potential of other points is shown in figure. 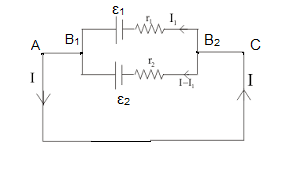 ➢ When E.M.F's and internal resistance of all the cells are equal

(II) When emf's and internal resistance of all the cells connected in parallel are different.

Applying Kirchhoff's 2nd law to closed mesh ABEF we get

If n cells are joined in parallel, then  and Eeq., req. 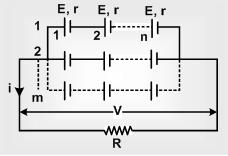 In this combination, a certain number of cells are joined in series in various rows, and all such rows are then connected in parallel with each other.

Total number of cells in the combination = mn. As e.m.f. of each row = nE and all the rows are connected in parallel, hence net e.m.f of battery = nE.

Hence total resistance of the circuit =

If the current in external resistance is I, then

This will be possible when the quantity [Önr - ÖmR]2 is minimum. Because this quantity is in square, it can not be negative, hence its minimum value will be equal to zero, i.e.,

Example 4. Find the current in the loop.

Sol. The given circuit can be simplified as

Example 5. Find the emf and internal resistance of a single battery which is equivalent to a combination of three batteries as shown in figure.

Battery (B) and (C) are in parallel combination with opposite polarity. So, their equivalent