Any police officer may without an order from a magistrate and without a warrant, arrest any person:

The essential ingredients of the offence of simple hurt are as follows:

Definition of Grievous HurtThe offence of grievous hurt is defined by section 320 of the Indian Penal Code.Section 320 says that the following eight kinds of hurt are designated as grievous: 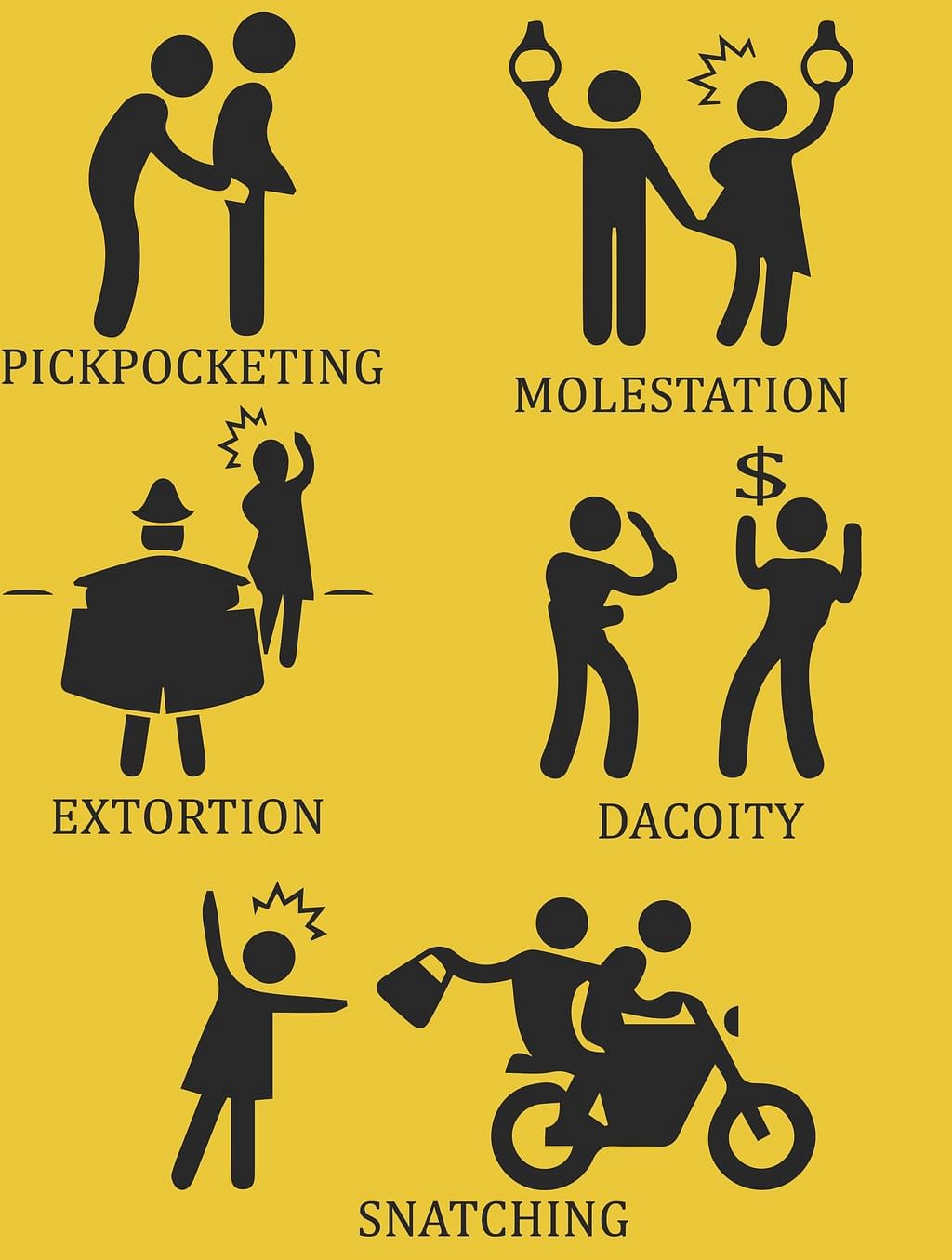 Bail and Cancellation of Bail

Conditions that may be imposed by the CourtThe High Court or the Court of Session may include such conditions in the light of the facts of the particular case, as it may think fit, including:

A person commits adultery if he:

Note: The inconsistencies of the man are punishable, but not the inconsistencies of the wife. The wife is not punishable as an abettor. It is not committed by a married man who has sexual intercourse with an unmarried woman, or with a widow, or even with a married woman whose husband consents to it.Whoever commits adultery shall be punished with imprisonment which may extend to five years, or with fine, or with both. The wife, as an abettor shall not be punishable.

Illustrations(a)  A lays sticks and turf over a pit, with the intention of thereby causing death, or with the knowledge that death is likely to be there by caused. Z believing the ground to be firm, treads on it, falls in and is killed. A has committed the offence of culpable homicide.(b)  A knows Z to be behind a bush. B does not know it A, intending to cause, or knowing it to be likely to cause Z’s death, induces B to fire at the bush. B fires and kills Z. Here B may be guilty of no offence; but A has committed the offence of culpable homicide.(c)  A, by shooting at a fowl with intent to kill and steal it, kills B who is behind a bush; A not knowing that he was there. Here, although A was doing an unlawful act, he was not guilty of culpable homicide, as he did not intend to kill B, or to cause death by doing an act that he knew was likely to cause death.

Explanation 1. A person who causes bodily injury to another who is labouring under a disorder, disease or bodily infirmity, and thereby accelerates the death of that other, shall be deemed to have caused his death.

Explanation 2. Where death is caused by bodily injury, the person who causes such bodily injury shall be deemed to have caused the death, although by resorting to proper remedies and skillful treatment the death might have been prevented.

Explanation 3. The causing of the death of a child in the mother’s womb is not homicide. But it may amount to culpable homicide to cause the death of a living child if any part of that child has been brought forth, though the child may not have breathed or been completely born.

Murder - Sec. 300Except in the cases hereinafter excepted, culpable homicide is murder, if the act by which the death is caused is done with the intention of causing death.

(Secondly): If it is done with the intention of causing such bodily injury as the offender knows to be likely to cause the death of the person to whom the harm is caused

(Thirdly): If it is done with the intention of causing bodily injury to any person and the bodily injury intended to be inflicted is sufficient in the ordinary course of nature to cause death

(Fourthly): If the person committing the act knows that it is so imminently dangerous that it must, in all probability, cause death or such bodily injury as is likely to cause death, and commits such act without any excuse for incurring the risk of causing death or such injury as aforesaid.

Illustrations(a) A shoots Z with the intention of killing him. Z dies in consequence. A commits murder.(b) A, knowing that Z is labouring under such a disease that a blow is likely to cause his death, strikes him with the intention of causing bodily injury. Z dies in consequence of the blow. A is guilty of murder, although the blow might not have been sufficient in the ordinary  course of nature to cause the death of a person in a sound state of health.

The above exception is subject to the following provisos:

Exception 2. Culpable homicide is not murdered if the offender, in the exercise in good faith of the right of private defence of person or property, exceeds the power given to him by law and causes the death of the person against whom he is exercising such right of defence without premeditation, and without any intention of doing more harm than is necessary for the purpose of such defence.

Z attempts to horsewhip A, not in such a manner as to cause grievous hurt to A. A draws out a pistol. Z persists in the assault. A believing in good faith that he can by no other means prevent himself from being horsewhipped, shoots Z dead. A has not committed murder, but only culpable homicide.

Exception 3. Culpable homicide is not murdered if the offender, being a public servant or aiding a public servant acting for the advancement of public justice, exceeds the powers given to him by law, and causes death by doing an act which he, in good faith, believes to be lawful and necessary for the due discharge of his duty as such public servant and without ill-will towards the person whose death is caused.

Exception 4. Culpable homicide is not murdered if it is committed without premeditation in a sudden fight in the heat of passion upon a sudden quarrel and without the offender having taken undue advantage or acted in a cruel or unusual manner.  Explanation.—It is immaterial in such cases which party offers the provocation or commits the first assault.

Exception 5. Culpable homicide is not murder when the person whose death is caused, being above the age of eighteen years, suffers death or takes the risk of death with his own consent. Illustration A, by instigation, voluntarily causes, Z, a person under eighteen years of age to commit suicide. Here, on account of Z’s youth, he was incapable of giving consent to his own death; A has therefore abetted murder.

Try yourself:X knows Y is suffering from a particular disease in which he can die if given a simple blow. X causes a simple blow to Y with an intention to cause bodily injury. Y dies. X is guilty of:
Explanation

A person, who causes bodily injury to another who is labouring under a disorder, disease or bodily infirmity, and thereby accelerates the death of that other, shall be deemed to have caused his death. The person shall be liable of murder if had the intention to do so.

Definition of Criminal Breach of Trust

Differences Between Culpable Homicide and Murder

Try yourself:Intention is required in which of the following?
Explanation

Intention is required in both Murder and Culpable Homicide.

Differences Between Kidnapping and Abduction 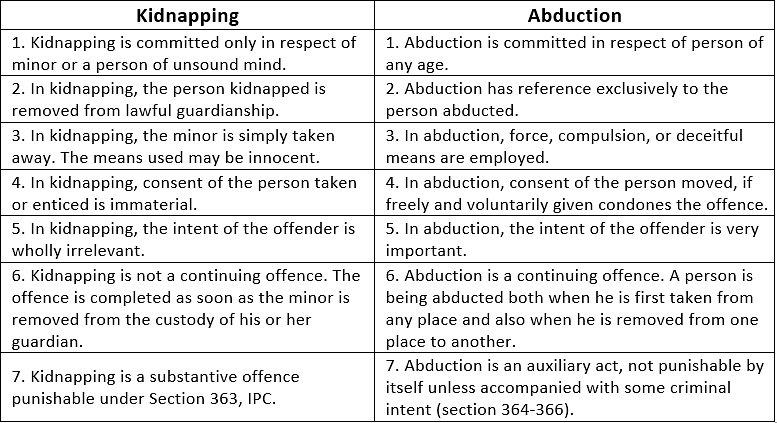 Try yourself:Which of the following is an auxiliary act?
Explanation

Abduction is an auxiliary act, not punishable by itself, unless accompanied with some intent specified u/s 364-366. Hence, a particular purpose is necessary to punish an accused.

Differences Between Acquittal and Discharge 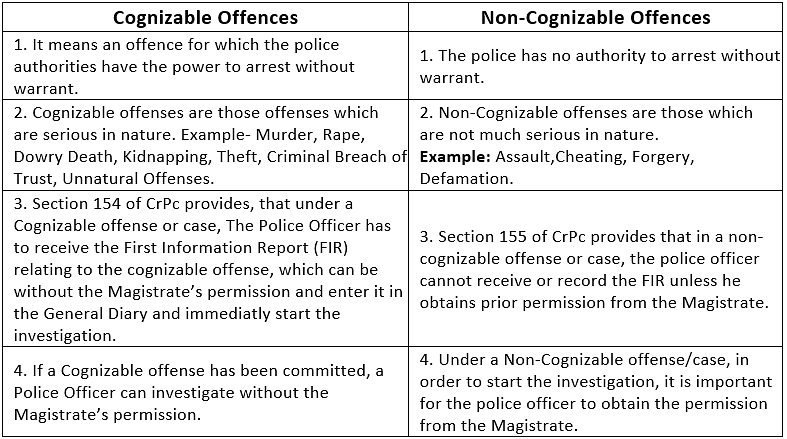