What is a Matter?

Anything that has mass and occupies space is called matter. The quantity of matter is its mass. Example: chalk, table, car, air, pen, YOU!.

Matter can exist in three physical states viz. solid, liquid, and gas.The constituent particles of matter in these three states can be represented as shown in the figure: Because of such an arrangement of particles, different states of matter exhibit the following characteristics:

Note: These three states of matter are interconvertible by changing the conditions of temperature and pressure.

The classification of matter is based upon the chemical composition of various substances. According to this matter can be further divided into two types, pure substance, and mixtures.

Question for Nature of Matter & Its Properties
Try yourself:Which one of the following is not an element?
Explanation

Silica (SiO2) is a compound and not an element.

Example: Water, methane are made up of molecules , H20 and CH4 respectively. Question for Nature of Matter & Its Properties
Try yourself:Which one if the following is not a metalloid?
Explanation

Germanium is not a metalloid.

Mixtures are the aggregate of more than one type of pure substance whose chemical identity remains maintained even in mixtures. Their constituent ratio may vary, unlike compounds.

There are two types of mixture:

Question for Nature of Matter & Its Properties
Try yourself:Which one of the following is not mixture?
Explanation

Plaster of Paris is a compound (CaSO4).

Table: Comparison between Compound and Mixtures Question for Nature of Matter & Its Properties
Try yourself:The most abundant element on the earth’s crust is
Explanation

The most abundant element on earth’s crust is Oxygen.

Fundamental units are those units which can neither be derived from one another nor can be further resolved into any other units.

The International System of Units (in French Le Systeme International d’Unites– abbreviated as SI) was established by the 11th General Conference on Weights and Measures (CGPM from Conference Generale des Poids at Measures). The SI system has seven base units. 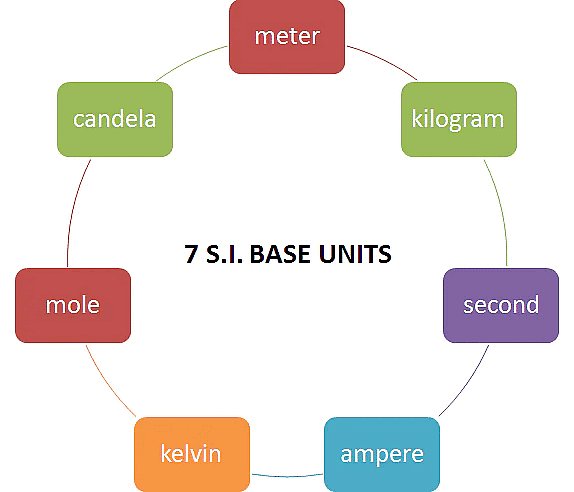 Table: The Seven Fundamental Units of measurement in S.I. system.

Definitions of S.I. Base Units

Some quantities are expressed as a function of more than one fundamental unit known as derived units.Example: Velocity, acceleration, work, energy, area, density, etc.