Q. 35. Find the electric field strength vector if the potential of this field has the form φ = ar, where a is a constant vector, and r is the radius vector of a point of the field.

Solution. 35. In accordance with the problem

Thus from the equation

where a is a constant. Draw the approximate shape of these fields .using lines of force (in the x, y plane).

The sought shape of field lines is as shown in the figure (a) of answersheet assuming a > 0:

Plot as shown in the figure (b) of answersheet

Q. 37. The potential of a certain electrostatic field has the form cp = a (x2 + y2) + bz2, where a and b are constants. Find the magnitude and direction of the electric field strength vector. What shape have the equipotential surfaces in the following cases:

Shape of the equipotential surface :

Then the equipotential surface has the equation

and the equation of the equipotential surface is

which is an ellipse in p , z coordinates. In three dimensions the surface is an ellipsoid of revolution with semi- axis

then the equation is

This is a single cavity hyperboloid of revolution about z axis. If φ = 0 then

is the equation of a right circular cone.

This is a two cavity hyperboloid of revolution about z-axis.

Q. 38. A charge q is uniformly distributed over the volume of a sphere of radius R. Assuming the permittivity to be equal to unity throughout, find the potential (a) at the centre of the sphere; (b) inside the sphere as a function of the distance r from its centre.

Solution. 38. From Gauss’ theorem intensity at a point, inside the sphere at a distance r from the centre is given by,

and outside it, is given by

(a) Potential at the centre of the sphere,

(b) Now, potential at any point, inside the sphere, at a distance r from it s centre.

Q. 39. Demonstrate that the potential of the field generated by a dipole with the electric moment p (Fig. 3.4) may be represented as

where r is the radius vector. Using this expression, find the magnitude of the electric field strength vector as a function of r  and θ.

Solution. 39. Let two charges +q and - q be separated by a distance l. Then electric potential at a point at distance r > > l from this dipole, 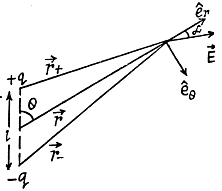 where p is magnitude of electric moment vector.

Q. 40. A point dipole with an electric moment p oriented in the positive direction of the z axis is located at the origin of coordinates. Find the projections Ez  and E⊥ of the electric field strength vector (on the plane perpendicular to the z axis at the point S (see Fig. 3.4)). At which points is E perpendicular to p?

Solution. 40. From the results, obtained in the previous problem,

From the given figure, it is clear that,

the points located on the lateral surface of the cone, having its axis, coinciding with the direction of z-axis and semi vertex angle

Q. 41. A point electric dipole with a moment p is placed in the external uniform electric field whose strength equals E0, with

In this case one of the equipotential surfaces enclosing the dipole forms a sphere. Find the radius of this sphere.

Alternate : Potential at the point, near the dipole is given by,

For φ to be constant,

Q. 42. Two thin parallel threads carry a uniform charge with linear densities λ and —λ. The distance between the threads is equal to l. Find the potential of the electric field and the magnitude of its strength vector at the distance r ≫ l at the angle θ to the vector l (Fig. 3.5). 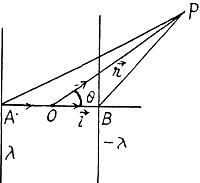 Q. 43. Two coaxial rings, each of radius R, made of thin wire are separated by a small distance l (l ≪ R) and carry the charges q and —q. Find the electric field potential and strength at the axis of the system as a function of the x coordinate (Fig. 3.6). Show in the same drawing the approximate plots of the functions obtained. Investigate these functions at |x| ≫ R.

Solution. 43. The potential can be calculated by superposition. Choose the plane of the upper ring as x = l/2 and that of the lower ring as x = - l/2.

The electric field is

The plot is as given in the book.

Q. 44. Two infinite planes separated by a distance l carry a uniform surface charge of densities σ and —σ (Fig. 3.7). The planes have round coaxial holes of radius R, with 1 ≪ R. Taking the origin O and the x coordinate axis as shown in the figure, find the potential of the electric field and the projection of its strength vector Ex  on the axes of the system as functions of the x coordinate. Draw the approximate plot φ (x). 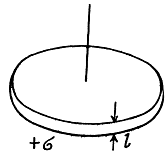 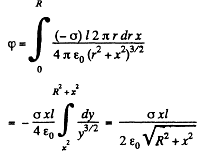 The plot is as shown in the answersheet.

Q. 45. An electric capacitor consists of thin round parallel plates, each of radius R, separated by a distance l (l ≪ R) and uniformly charged with surface densities σ and —σ. Find the potential of the electric field and the magnitude of its strength vector at the axes of the capacitor as functions of a distance x from the plates if x ≫ l. Investigate the obtained expressions at x ≫ R.

Solution. 45. For x > 0 we can use the result as given above and write

for the solution that vanishes at α. There is a discontinuity in potential for |x| = 0. The solution for negative x is obtained by σ → -σ. Thus

not change as the point of observation is moved along the thread.

Q. 47. Find the interaction force between two water molecules separated by a distance l = 10 nm if their electric moments are oriented along the same straight line. The moment of each molecule equals p = 0.62.10-29  C • m.

Solution. 47. Force on a dipole of moment p is given by,

In our problem, field, due to a dipole at a distance l, where a dipole is placed,

Hence, the force of interaction,

On integrating, we get,

Q. 51. The field potential in a certain region of space depends only on the x coordinate as φ = — ax3 + b, where a and b are constants. Find the distribution of the space charge p (x).

Then using Gauss’s theorem in differential from

Q. 52. A uniformly distributed space charge fills up the space between two large parallel plates separated by a distance d. The potential difference between the plates is equal to Δφ. At what value of charge density p is the field strength in the vicinity of one of the plates equal to zero? What will then be the field strength near the other plate?

Solution. 52. In the space between the plates we have the Poisson equation

where p0 is the constant space charge density between the plates.

Q. 53. The field potential inside a charged ball depends only on the distance from its centre as φ = ar2 + b, where a and b are constants. Find the space charge distribution p (r) inside the ball.

Solution. 53. Field intensity is along radial line and is

From the Gauss’ theorem,

where dq is the charge contained between the sphere of radii r and r + dr.

The document Irodov Solutions: Constant Electric Field in Vacuum - 3 - Notes | Study Physics Class 12 - NEET is a part of the NEET Course Physics Class 12.
All you need of NEET at this link: NEET
Attempt Now
Join Course