Article 315 provides there will be one UPSC at centre and a State public service commission for every state, however two or more states may agree to have a joint PSC and in that case President shall by law provide for the appointment of joint PSC.

All, the chairman and members, are appointed for 6 years or until in case of UPSC they attain the age of 65 years and in case of joint and state commission 62 years whichever is earlier.

Number of members will be declared by the President in case of Union Public Service Commission.

Number of members will be declared by the Governor in case of state public service commission.

The expenditures of Union Public Service Commission are charged upon consolidated fund of India.

The commission has to be constituted by the President every five year. The chairman must be a person having experience in public affairs and the other four members must be appointed from amongst the following:-

Article 281 lays down the duty on the President to lay the recommendations of the commission before each house of parliament.

What is a Finance Commission?

It is a body set up under Article 280 of the Constitution. Its primary job is to recommend measures and methods on how revenues need to be distributed between the Centre and states.

What else is its job?

Besides suggesting the mechanism to share tax revenues, the Commission also lays down the principles for giving out grant-in-aid to states and other local bodies. In the case of 14th Commission, these principles will apply for a five-year period beginning April 1, 2015.

What kind of work a Finance Commission has to do?

The commission has to take on itself the job of addressing the imbalances that often arise between the taxation powers and expenditure responsibilities of the centre and the states, respectively. Primarily, it has to ensure a sense of equality in public services across the states.

Who is the head of the latest i.e. 14th Finance Commission?

Former Governor of the Reserve Bank of India, Mr. Y.V. Reddy, is the Chairman.

What is the key recommendation of the 14th Finance Commission?

It has recommended an increase in the share of states in the centre's tax revenue from the current 32 per cent to 42 per cent. This is indeed the single largest increase ever recommended by a Finance Commission.

What does it means to States?

What will the impact of this recommendation if accepted by the Centre?

"The higher tax devolution will allow States greater autonomy in financing and designing schemes as per their needs and requirements," says the report. Practically, it will give more power to states in determining how they spend this money.

What is the implication of this recommendation?

Well, it comes at a time when the Centre is trying to push GST (goods and services tax). Perhaps, higher devolution will help to reassure the States that they will not be at the wrong end of the stick if GST is introduced.

Article 324 provides for the establishment of Election Commission.

The Election Commission consists of a

Since its inception in 1950 and till 15th October 1989, the Election Commission has functioned as a single member body consisting of chief election commissioner. On 16th October 1989, the President appointed two more Election Commissioners to cope with the increased work of the election commission on account of lowering of the voting age from 21 to 18 years by the 61st Constitutional Amendment Act of 1989.

The chief election commissioner and other election commissioners are entitled to the same salary and other facilities as are provided to a judge of the Supreme Court. They hold the office for a six years term or until they attain the age of 65 years, whichever is earlier. They can resign at any time or can be removed before the expiry of their term on the same ground and procedure as that of judge of Supreme Court i.e. on the basis of a resolution passed by both the houses of Parliament with special majority on the ground of either proved misbehaviour or incapacity.

The Supreme Court has held that Election Commission is free to fix any date as to when the elections are to be held and it is duty bound to ensure that elections are conducted in free and fair manner.

There is no provision for the prime minister or speaker, so that any dispute relating to election to these offices is to be determined only by an election petition before the High Court, according to article 329(b).

It is not necessary for every association to get registered by the Election Commission. Only an association or body of individual citizens of India calling itself a political party and intending to avail itself of the provisions of Part-IV-A of the Representation of the People Act, 1951, (relating to registration of political parties) is required to get itself registered with the Election Commission of India.

( i ) at least one member to the House of the People for every twenty-five members of that House or any fraction of that number from that State;

(ii) at least one member to the Legislative Assembly of that State for every thirty members of that Assembly or any fraction of that number;

The conditions in Clause (A) or Clause (B) above shall not be deemed to have been fulfilled by a political party, if a member of the House of the People or the Legislative Assembly of the State becomes a member of that political party after his election to that House or, as the case may be, that Assembly.

At present (2013), a party is recognised as a national party if any of the following conditions is fulfilled:

Conditions for Recognition as a State Party :

At present (2013), a party is recognised as a state party in a state if any of the following conditions is fulfilled:

The number of recognised parties keeps on changing on the basis of their performance in the general elections.

In the present political scenario of the country, the role of the regional parties has become all the more important. Legally speaking, there is no regional party as such provided for by and law of the land. The Election Commission in India recognizes two types of parties:

In general parlance, the State parties are termed as regional parties.

Most regional political parties have grown in the last three decades as instruments to capture the non-Congress space in their respective States and sometimes they play a crucial role in State politics. The regional parties—the AIDMK and ADMK, Asom Gana Parishad (AGP), Nagaland People’s Council etc., maintain that the problems of their regions are not being attended to by the Central Government.

Other major regional parties like the  Telegu Desam Party, Akali Dal etc. are some about the lack of educational facilities, good roads, water, electricity and communications in their respective regions.

In our coalition politics, we have seen that on several occasions, the multi-party system has made the national political parties dependent on regional parties when no all-India party was in a position to secure absolute majority in the Lok Sabha.

In India’s federal democratic polity, regional and local parties would continue to have relevance and appeal, especially for certain dominant social and economic interests. Many of these parties, in effect, have a characteristic similar to pressure and interest groups, both in their size and role in the political system. Their influence waxes and wanes in the context of national parties. 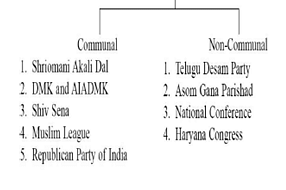 The framers of the Constitution took note of the fact that certain communities in the country were suffering from extreme social, educational and economic backwardness arising out of age-old practice of untouchability and certain others on account of this primitive agricultural practices, lack of infrastructure facilities and geographical isolation, and who need special consideration for safeguarding their interests and for their accelerated socio-economic development. These communities were notified as Scheduled Castes and Scheduled Tribes as per provisions contained in Clause 1 of Articles 341 and 342 of the Constitution respectively.

The need for providing adequate safeguards for the Scheduled Castes and Scheduled Tribes was recognised by the framers of the Indian Constitution. For this purpose, special provisions were made in the Constitution of India to promote social, educational, economic and service interests of these two weaker sections of the society. The Constitution of India also provided for appointment of a Special Officer under Article 338 for investigation of all matters relating to the safeguards provided for the Scheduled Castes and Scheduled Tribes and to submit reports to the President, annually and at such other times, as the Commission may deem fit, about working of these safeguards.

Functions and Duties of the Commission

Following are the functions, duties and powers of the commission:

To make in such reports recommendations as to the measures that should be taken by the Union or any State for the effective implementation of those safeguards and other measures for the protection, welfare and socio-economic development of the Schedule Castes as the President may by rule specify.

Dr. PL Punia is the Chairman of the Commission currently.

Primitive, geographically isolated, shy and socially, educationally & economically backwardness these are the traits that distinguish Scheduled Tribes of our country from other communities. Tribal communities live in about 15% of the country’s areas in various ecological and geo-climatic conditions ranging from plains to forests, hills and inaccessible areas. Tribal groups are at different stages of social, economic and educational development.

While some tribal communities have adopted a mainstream way of life at one end of the spectrum, there are 75 Primitive Tribal Groups (PTGs), at the other, who are characterized by

(a) a pre-agriculture level of technology, (b) a stagnant or declining population (c ) extremely low literacy and (d) a subsistence level of economy.

There are over 500 tribes (with many overlapping communities in more than one State) as notified under article 342 of the Constitution of India, spread over different States and Union Territories of the country, the largest number of tribal communities being in the State of Orissa. The main concentration of tribal population is in central India and in the Northeastern States. However, they have their presence in all States and Union Territories except Hayrana, Punjab, Delhi, Pondicherry and Chandigarh. The predominantly tribal populated States of the country (tribal population more than 50% of the total population) are: Arunachal Pradesh, Meghalaya, Mizoram, Nagaland, Union Territories of Dadra & Nagar Haveli and Lakshadweep. States with sizeable tribal population and having areas of large tribal concentration are A.P. Assam, Chhattisgarh, Gujarat, Himachal Pradesh, Madhya Pradesh, Maharashtra, Orissa and Rajasthan.

Constitution of India under Article 338A has assigned the following duties and functions to the Commission:

Powers of the Commission

(a) The Commission shall have all the powers of a Civil Court trying a suit.

(c) MonitoringThe Commission while investigating matters relating to the safeguards provided under the Constitution monitors the implementation and working of safeguards which include:Acting upon Article 23 of the Constitution which prohibits traffic in human beings and forced labour, etc.; in respect of STs Prohibition of child labor under Article 24; in respect of STs

(f) Working of service safeguards provided under Articles 16(4), 16(4A), 16(4B) and 335 providing for adequate representation of Scheduled Tribes in appointments or posts(g)Enforcement of various laws such as:

(vi) The Panchayat (Extension to the Scheduled Areas) Act, 1996

Dr.Rameshwar Oraon is the Chairman of the Commission currently.