(A Statutory Body under the Ministry of Social Justice & Empowerment)

Pursuant to the direction of the Supreme Court in the Mandal case judgment, the Government of India enacted the National Commission for Backward Classes Act, 1993 for setting up a National Commission for Backward Classes at the Centre as a permanent body. Article 340 of the Constitution provides for the appointment of a Commission to investigate the conditions of and the difficulties faced by the socially and educationally backward classes and to make appropriate recommendations.The Act came into effect on the 2nd April, 1993. The Act provides that the Commission shall consist of five Members, comprising of a Chairperson who is or has been a judge of the Supreme Court or of a High Court; a social scientist; two persons, who have special knowledge in matters relating to backward classes; and a Member-Secretary, who is or has been an officer of the Central Government in the rank of a Secretary to the Government of India.

Functions of the Commission under the Act

Under Section 11 (1) of the Act, the Central Government may at any time, and shall, at the expiration of ten years from the coming into force of this Act and every succeeding period of ten years thereafter, undertake revision of the lists with a view to excluding from such lists those classes who have ceased to be backward classes or for including in such lists new backward classes.

The Commission, after studying the criteria/ indicators framed by the Mandal Commission and the commissions set up in the past by different state Governments and other relevant materials, formulated the following guidelines for considering requests for inclusion in the list of Other Backward Classes:

3. Castes and communities, having no representation or poor representation in the State Legislative Assembly and/or district-level Panchayati Raj institutions during the ten years preceding the date of the application

Article 16 provides for Prohibition of discrimination on grounds of religion, race, caste, sex or place of birth

Article 16 provides for Equality of opportunity in matters of public employment.

Under Article 338(5) of the Constitution, the following are the powers of the National Commission for Scheduled Castes:

It shall be duty of the Commission –

By clause (10) of the same Article, “Backward Classes” are included within the expression “Scheduled Castes”.  Clause (10) of Article 338 reads as follows:

“(10) In this article references to the Scheduled Castes and Scheduled Tribes shall be construed as including references to such other backward classes as the President may, on receipt of the report of a Commission appointed under clause (1) of Article 340, by order specify and also to the Anglo-Indian community”.

Article 350B of the Constitution provides for the appointment by President of a Special Officer for Linguistic Minorities. This Officer is known as National

It is his duty to investigate all matters relating to safeguards provided for the linguistic minorities and report to the President at such intervals as may be fixed and to monitor the implementation of safeguards through questionnaires, visits, conferences, seminars, meetings, review mechanism, etc.

Annual reports are being presented to the President through the Minister of Minority Affairs.

They are laid on the table of both Houses of Parliament.

(An Organization to safeguard the Constitutional and Legal rights of Minorities)

Constitution of the National Commission for Minorities

Under Section 3(2) of the NCM Act, the Commission shall consist of a Chairperson, a Vice-Chairperson and 5 members to be nominated by the Central Govt.

1) The Central Government shall constitute a body to be known as the National Commission for Minorities to exercise the powers conferred on, and to perform the functions assigned to it under this Act.

Functions of the Commission

The Commission shall perform all or any of the following functions, namely:a) To evaluate the progress of the development of Minorities under the Union and States;b) To monitor the working of the safeguards provided in the Constitution and in laws enacted by Parliament and the State Legislatures;

Governments;d) To look into specific complaints regarding deprivation of rights and safeguards of the Minorities and take up such matters with the appropriate authorities;

e) To cause studies to be undertaken into problems arising out of any discrimination against Minorities and recommend measures for their removal;

f) To conduct studies, research and analysis on the issues relating to socio-economic and educational development of Minorities;

g) To suggest appropriate measures in respect of any Minority to be undertaken by the Central Government or the State Governments;

Safeguards: Safeguards are of two types

Art. 29.  Protection of interests of minorities:

Art. 30. Right of minorities to establish and administer educational institutions

(1) All minorities, whether based on religion or language, shall have the right   to   establish and   administer educational institutions of their choice.

(1A) In making any law providing for the compulsory acquisition of any property of an educational institution established and administered by a minority, referred to in clause (1), the State shall ensure that the amount fixed by or determined under such law for the acquisition of such property is such as would not restrict or abrogate the right guaranteed under that clause.

Art. 347. Special provision relating to language spoken by a section of the population of a State:

On a demand being made in that behalf the President may, if he is satisfied that a substantial proportion of the population of a State desire the use of any language spoken by them to be recognized by that State, direct that such language shall also be officially recognized throughout that State or any part thereof for such purpose as he may specify.

Art. 350. Language to be used in representations for redress of grievances:

Every person shall be entitled to submit a representation for the redressal of any grievance to any officer or authority of the Union or a State in any of the languages used in the Union or in the State, as the case may be

Art. 350. Facilities for instruction in mother-tongue at primary stage

It shall be the endeavour of every State and of every local authority within the State to provide adequate facilities for instruction in the mother-tongue at the primary stage of education to children belonging to linguistic minority groups; and the President may issue such directions to any State as he considers necessary or proper for securing the provision of such facilities.

These have been agreed to by the Central and the State Governments through series of meetings of Chief Ministers of all the states.

The salient features of the Scheme, as at present, are :

1.      Translation and publication of important rules, regulations, notices, etc., into all languages, which are spoken by at least 15% of the total population at district or sub-district level;

2.      Declaration of minority languages as second official language in districts where persons speaking such languages constitute 60% or more of the population;

3.      Receipt of, and reply to, representations in minority languages; scheme of safeguards

4.      Instruction through mother tongues/ minority languages at the Primary stage of education;

5.      Instruction through minority languages at the Secondary stage of education;

7.      Provision for text books and teachers in minority languages; scheme of safeguards

11.  Setting up of proper  machinery  at the State and district levels.

1. State Government replies to questionnaire sent by the Commissioner.

2. Information received from other organizations.

3. Information gathered during visits to States.

5. Books and articles published by scholars.

The current Chairperson is Naseem Ahmad.

CompositionThe Commission shall consist of:

The member Secretary should be either

FunctionsThe Commission shall perform all or any of the following functions, namely:a) Investigate and examine all the matters relating to the safeguards provided for the women under the Constitution and other laws;

f) Look into complaints and take suo-moto notice of the matters relating to:

g) Call for special studies or investigations into specific problems or situations arising out of the discrimination and atrocities against the women and identify the constraints so as to recommend strategies for their removal;

h) Undertake the promotional and educational research so as to suggest ways of ensuring due representation of the women in all spheres and identify factors responsible for impeding the support services and technologies for reducing drudgery and occupational health hazards and for increasing their productivity;

i) Evaluate the progress of the development of women under the Union and any State;j) Inspect or cause to inspect a jail, remand home, women's institution or other places of custody where the women are kept as prisoners or otherwise and take up with the concerned authorities for remedial action, if found necessary;

k) Fund litigations involving the issues affecting a large body of the women;l) Make periodical reports to the Government on any matter pertaining to the women and in particular various difficulties under which women toil;

m) Any other matter which may be referred to it by the Central Government.

The National Human Rights Commission (NHRC) of India is an autonomous public body constituted on 12 October 1993 under the Protection of Human Rights Ordinance of 28 September 1993. It was given a statutory basis by the Protection of Human Rights Act, 1993 (TPHRA). The NHRC is the national human rights institution, responsible for the protection and promotion of human rights, defined by the Act as "rights relating to life, liberty, equality and dignity of the individual guaranteed by the Constitution or embodied in the International Covenants".

"Human Rights" means the rights relating to life, liberty, equality and dignity of the individual guaranteed by the constitution or embodied in the International covenants and enforceable by courts in India. "Commission" means the National Human Rights Commission constituted under section of All human beings are born free and equal in dignity and rights known as Human rights, as commonly understood, are the rights that every human being is entitled to enjoy freely irrespective of his religion, race, caste, sex and nationality, etc. (Jagdish chand, 2007) In Declaration of Independence acknowledged the fundamental human rights. Human right means different thing to different people. Human Rights are not static. New rights are recognized and enforced from time to time. Only persons fully conversant with the latest development about the expanding horizons of Human Rights can promote their awareness better than others.

The international human rights movement was strengthened when the United Nations General Assembly adopted of the Universal Declaration of Human Rights (UDHR) on 10 December 1948. Drafted as ‘a common standard of achievement for all peoples and nations', the Declaration for the first time in human history, outlined basic civil, political, economic, social and cultural rights that all human beings should enjoy. 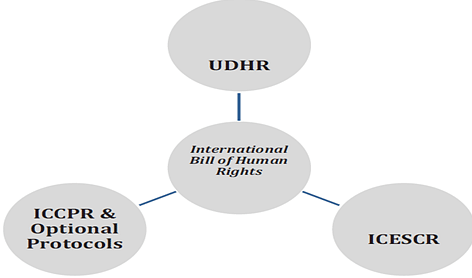 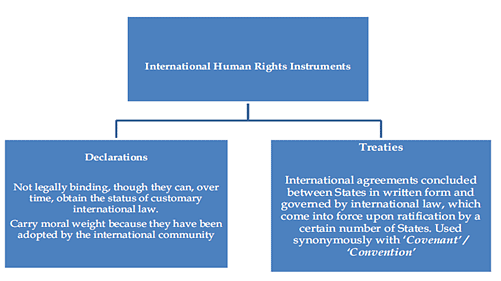 TPHRA mandates the NHRC to perform the following functions:

The current (acting) chairperson of the NHRC is Justice Cyriac Joseph

A State Government may constitute a body known as the Human Rights Commission of that State to exercise the powers conferred upon, and to perform the functions assigned to, a State Commission. At present, 23 states have constituted SHRC.