The document Contract of Law - Notes CLAT Notes | EduRev is a part of the CLAT Course Legal Reasoning for CLAT.
All you need of CLAT at this link: CLAT

1. OfferWhen one person expresses his will to another person to do or not to do something, to take his approval is known as an offer. An offer must be definite, certain and complete in all respects. It must be communicated to the party to whom it is made.

2. Invitation to Offer It is an act prior to an offer, in which one person induces another person to make an offer to him. The invitation to offer is made to inform the public the terms and conditions and also in which a person is interested to enter into a contract with the other party.

In a leading case, company A advertised a sale by action. B travelled to the advertised place of action and found that the defendant had cancelled the action sale. He bought an action against the defendant to recover the expenses of his travel. It was held that he was not entitled for the same as there was yet no contract between the parties. Example: A promises to deliver his watch to B and in return B promises to pay a sum of Rs. 200 to A. There is said to be an agreement between A & B.

Let's Check your Understanding so far

Question. Principle 1: An offer is a proposal made with the intention of entering into an agreement.

Principle 2: Acceptance of an offer is essential for the existence of an agreement.

Facts: "Rashid has lost his wallet inside his college campus. He uploads a post on the college Facebook group with its photo and promises a reward of Rs. 500/- for returning it or any information leading to discovery. In the meantime, Aditya, Rashid’s roommate, who was attending a lecture when Rashid discovered he lost his wallet, spots the wallet outside the library. He returns the wallet to Rashid. Later in the evening, when he accesses Facebook, he sees the post with the promise of reward. He approaches Rashid to claim the reward".

(a) Aditya will get the reward since he found the wallet.

(b) Aditya will not get the reward since he performed a duty of a friend, which transcends any contractual relations.

(c) Aditya will get the reward since he performed a condition of the contract by returning the wallet.

(d) Aditya will not get the reward since he did not accept the offer, as he was unaware about the offer in the first place.

Essentials of A Valid Contract 1. Offer and AcceptanceThere must be a ‘lawful offer’ and a ‘lawful acceptance’. In other words, there are some legal rules governing offer and acceptance.

2. Intention to Create Legal obligationBoth the parties, to a contract, must contemplate legal consequences.

Example: a husband offering to take his wife out for a movie is not an agreement intended to create legal relations.

Both parties, to a contract must enter it out of their free will and consent. Consent is said to be “free” when it is not affected by reasons such as

However, the Indian Contract Act lays down that in certain special cases, for a contract to be valid, it must only be in writing. Besides, it also needs to be registered.Example: An agreement for a sale of immovable property must be in writing and registered.

To ensure that a contract is valid, the terms of it must be certain. In other words “agreements, the meaning of which is not certain or capable of being made certain are void”.

Example: Mr. Sharma agrees to sell his car to Mr. Mukesh at “best competitive price” since the price is not clearly ascertainable in this case, the agreement is void.

9. Possibility of PerformanceThe Contract Act lays down that “Agreement to do an impossible act is void”.

Example: Nagabushan agrees to bring a dead body alive in return for a crore of rupees. The agreement is not enforceable.

10. Not Expressly Declared VoidThe Contract Act has ‘expressly declared’ certain agreements to be void.Following are the cases:

Thus, an agreement should not be expressly declared void by the Act.

Effect Of Acceptance: A contract comes into effect only after the offer is accepted. Before its acceptance, neither party is bound by it.

➢ Essentials of A Valid Acceptance 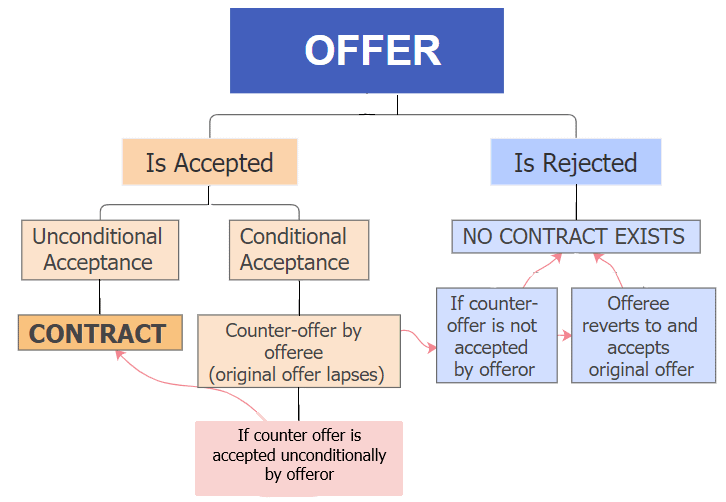 1. Acceptance must be communicated by the 'Offeror to the Offeree

Acceptance must reach the offeror and he must also be aware it.

2. Acceptance must be absolute and unqualified

Acceptance should not be 'conditional'; conditional acceptance is not binding on the offeror.

3. Acceptance must be communicated in the prescribed manner or in a reasonable/usual manner.

4. Acceptance has to be communicated while the offer is subsisting

➢ When is Acceptance Completed?

Modes of Revocation of Offer:

➢ Who are Competent to Contract?

In a very popular case, Mohiri Bibee in Dharmodas Ghose (ILR 1903) 30 cal 539 a minor mortgaged his house in favour of a money lender and received certain amount from him. The privy council held that the money lender is not entitled to get the money back which was advanced to a minor. This is because only a person capable of entering into a agreement can make a contract.

➢ Minor and Rule of Estoppel

➢ Minor and Rule of Restitution

Therefore, if a minor meets an accident and a person expends money on his hospital expenses, he would be reimbursed from minor’s property. A minor’s parents are out of the station. His neighbour lends him money to buy food and clothes for himself his claim of repayment would lie against minor’s property.

➢ What is a Sound Mind for the Purposes of Contracting?

➢ Remedies for Breach of Contract

➢ Effect of Mistakes as to Law

In each of these cases, the consideration or object of an agreement is said to be unlawful. Every agreement of which the object or consideration is unlawful is void.Examples:

Q.1. Principle: An agreement includes an offer and an acceptance accompanied by a consideration. Consideration must be lawful and carrying some value in the eyes of the law. Void agreements are devoid of consideration.Facts: Bina told her husband to drop her to the office in the evening as she was being late to the office every day and spoiling her impression in front of her new boss. The husband of Bina agreed to do this the next morning. However, he got late for the office and couldn’t drop her resulting into her being extremely late the same morning. This lowered her reputation in front of the new boss and she was finally removed from office. Bina sued her husband for not dropping her. Decide.(a) As a consideration, dropping to office has no value in the eyes of law. Hence, the agreement is void.(b) Bina may sue her husband but will not be granted any relief as Court does not award penalty in such matters.(c) There was an offer from Bina, which was accepted by her husband. The necessary terms of an agreement have been fulfilled and an agreement has come into place.(d) There is no consideration in the present case. Hence, due to absence of consideration, no agreement has come into playAns. (d)Q.2. Principle: All agreements are contracts if they are made by the free consent of parties competent to contract, for a lawful consideration and with a lawful object, and are not hereby expressly declared to be void. Consent is said to be free when it is devoid of coercion, undue influence, fraud, misrepresentation. “Coercion” is the committing, or threatening to commit, any act forbidden by the Indian Penal Code or the unlawful detaining, or threatening to detain, any property, to the prejudice of any person whatever, with the intention of causing any person to enter into an agreement.Facts: The electricity department of city of Melono sends people to various houses of a colony telling them to pay a certain amount towards compulsory replacement of existing meter by a meter that saves electricity. This is because of the growing electricity problems in the city. One of the customers, Ms. Manty, is uninterested in this and refuses to get her meter replaced. The group of persons sent to her house take this but Ms. Manty silently feels her that electricity supply to her house shall be cut off by this. Feeling threatened, she immediately agrees to get the meter changed. Is there any coercion here?(a) No, It was being done by a government department.(b) No, There has been no real committing or threat of commission of any act forbidden by IPC.(c) Yes, She was threatened by the group for cut of electricity supply.(d) Yes, The gesture of the persons of ‘taking this’ signifies threat.Ans. (d)