The document Demographics of India - UPSC/IAS Exam UPSC Notes | EduRev is a part of the UPSC Course Geography (Prelims) by Valor Academy.
All you need of UPSC at this link: UPSC

This article is about the people from India. For other uses, see Indian (disambiguation).

India is the second most populated country in the world with nearly a fifth of the world's population. According to the United Nations in July 2016, the population stood at 1,326,801,576

India is projected to be the world's most populous country by 2022, surpassing China, its population reaching 1.7 billion by 2050. Thus, India is expected to become the first political entity in history to be home to more than 1.5 billion people. Its population growth rate is 1.2%, ranking 94th in the world in 2013. The Indian population reached the billion mark in 1998.

Further complexity is lent by the great variation that occurs across this population on social parameters such as income and education. Only the continent of Africa exceeds the linguistic, genetic and cultural diversity of the nation of India. 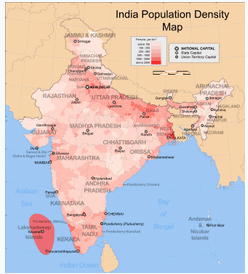 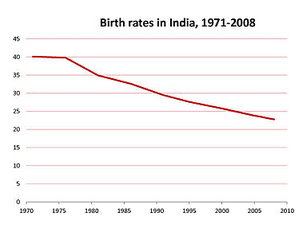 It has been estimated that the population was about 100 million in 1600 and remained nearly static until the late 19th century. It reached 255 million according to the first census taken in 1881.

Studies of India's population since 1881 have focused on such topics as total population, birth and death rates, growth rates, geographic distribution, literacy, the rural and urban divide, cities of a million, and the three cities with populations over eight million: Delhi, Greater Mumbai (Bombay), and Kolkata (Calcutta).

India's population has exceeded that of the entire continent of Africa by 200 million people. However, because Africa's population growth is nearly double that of India, it is expected to surpass both China and India by 2025.

Main article: List of States and Union Territories by demographics

The table below summarises India's demographics (excluding the Mao-Maram, Paomata and Purul subdivisions of Senapati District of Manipur state due to cancellation of census results) according to religion at the 2011 census in per cent. The data is "unadjusted" (without excluding Assam and Jammu and Kashmir); the 1981 census was not conducted in Assam and the 1991 census was not conducted in Jammu and Kashmir. 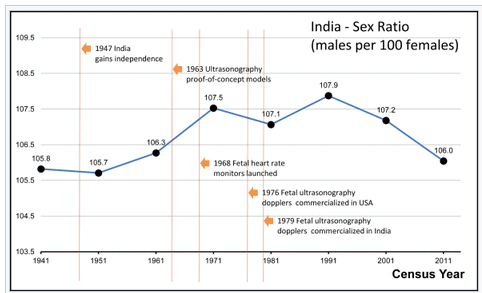 Male to female sex ratio for India, based on its official census data, from 1941 through 2011.[42] The data suggests the existence of high sex ratios before and after the arrival of ultrasound-based prenatal care and sex screening technologies in India.

Some activists believe India's 2011 census shows a serious decline in the number of girls under the age of seven – activists fear eight million female fetuses may have been aborted between 2001 and 2011. These claims are controversial. Scientists who study human sex ratios and demographic trends suggest that birth sex ratio between 1.08 and 1.12 can be because of natural factors, such as the age of mother at baby's birth, age of father at baby's birth, number of babies per couple, economic stress, endocrinological factors, etc. The 2011 census birth sex ratio in India, of 917 girls to 1000 boys, is similar to 870–930 girls to 1000 boys birth sex ratios observed in Japanese, Chinese, Cuban, Filipino and Hawaiian ethnic groups in the United States between 1940 and 2005. They are also similar to birth sex ratios below 900 girls to 1000 boys observed in mothers of different age groups and gestation periods in the United States.

Population within the age group of 0–6

Population above the age of 7 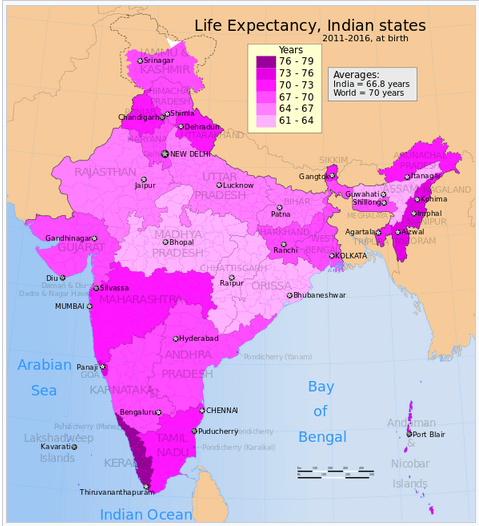 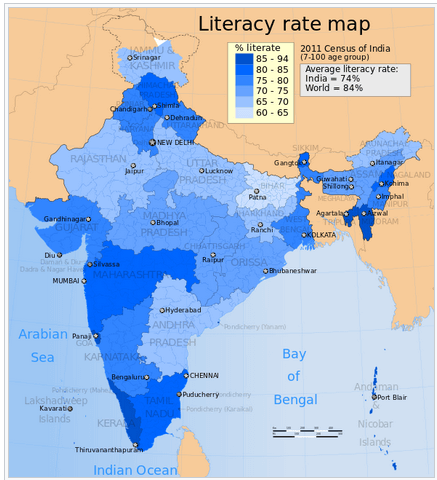 Main article: List of languages by number of native speakers in India

41.03% of the Indians speak Hindi while the rest speak Assamese, Bengali, Gujarati, Kannada, Malayalam, Marathi, Odia, Punjabi, Tamil, Telugu, Urdu and a variety of other languages.

The table immediately below excludes Mao-Maram, Paomata and Purul subdivisions of Senapati District of Manipur state due to cancellation of census results. 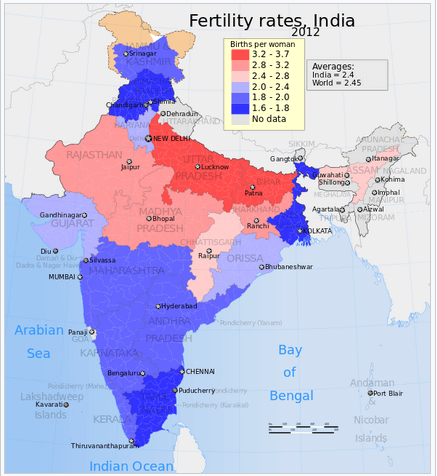 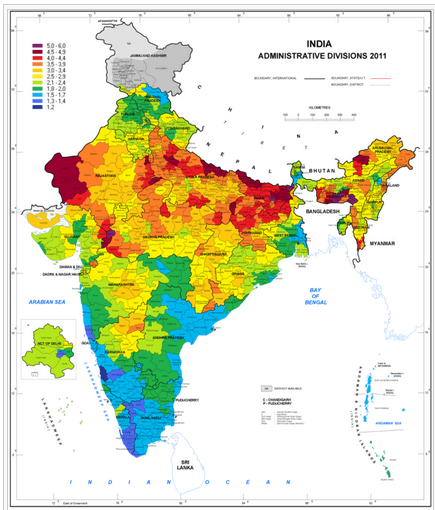 Structure of the population

Structure of the population (09.02.2011) (Census) (Includes data for the Indian-held part of Jammu and Kashmir, the final status of which has not yet been determined):

From the Demographic Health Survey 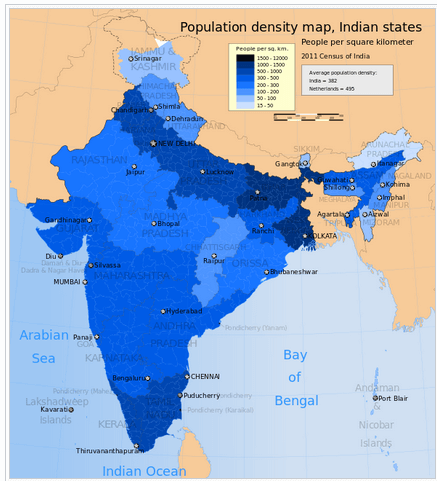 Map showing the population density in India, per 2011 Census

The following demographic statistics are from the CIA World Factbook, unless otherwise indicated.

Per cent of population below poverty line

There are 216 languages with more than 10,000 native speakers in India. The largest of these is Hindi with some 337 million, and the second largest is Bengali. 22 languages are recognised as official languages. In India, there are 1,652 languages and dialects in total.

India is projected to overtake China as the world's most populous nation by 2030. India's population growth has raised concerns that it would lead to widespread unemployment and political instability. Note that these projections make assumptions about future fertility and death rates which may not turn out to be correct in the event. Fertility rates also vary from region to region, with some higher than the national average and some lower.

The national Census of India does not recognise racial or ethnic groups within India, but recognises many of the tribal groups as Scheduled Castes and Tribes (see list of Scheduled Tribes in India).

For a list of ethnic groups in the Republic of India (as well as neighbouring countries) see ethnic groups of the Indian subcontinent.

Y-Chromosome DNA Y-DNA represents the male lineage, The Indian Y-chromosome pool may be summarised as follows where haplogroups R-M420, H, R2, L and NOP comprise generally more than 80% of the total chromosomes.

Numerous genomic studies have been conducted in the last 15 years to seek insights into India's demographic and cultural diversity. These studies paint a complex and conflicting picture.