The document NEET Previous Year Questions(2014-21): Digestion & Absorption Notes | Study Biology Class 11 - NEET is a part of the NEET Course Biology Class 11.
All you need of NEET at this link: NEET

The bile duct and the pancreatic duct open together into the duodenum as the common hepato-pancreatic duct which is guarded by a sphincter called the sphincter of Oddi.NCERT Reference: Page no. 261 (first paragraph) of chapter 16 of NCERT 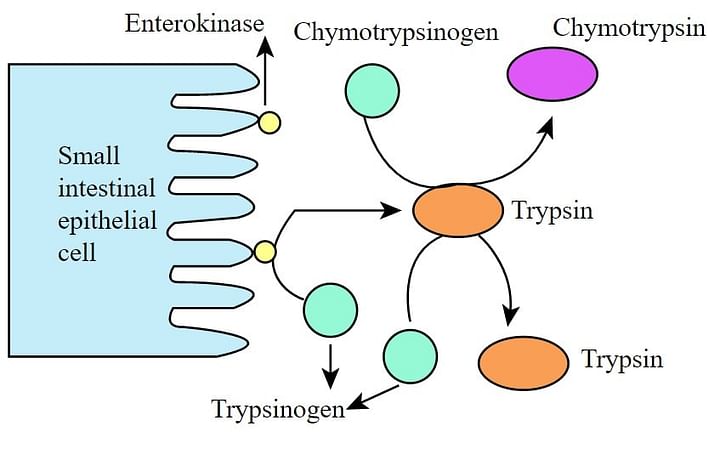 Enterokinase Enzyme is a type of Brush Border Enzyme.

Q.4. Identify the correct statement with reference to the human digestive system.     [NEET 2020](a) Ileum is a highly coiled part(b) Vermiform appendix arises from duodenum(c) Ileum opens into small intestine (d) Serosa is the innermost layer of the alimentary canal.

Correct Answer is Option (a)(a) Small intestine is distinguishable into three regions, a ‘U’ shaped duodenum, a long coiled middle portion jejunum and a highly coiled ileum.(b) A narrow finger-like tubular projection, the vermiform appendix which is a vestigial organ, arises from the caecum.(c) Ileum opens into the large intestine.(d) The wall of the alimentary canal possesses four layers from outer to inner namely serosa, muscularis, submucosa and mucosa. Serosa is the outermost layer and mucosa is the innermost layer.NCERT Reference: Page no. 259 of chapter 16 of NCERT

Correct Answer is Option (d)Goblet cells are modified columnar epithelial cells. These are found in the lining of organs like respiratory tract and intestine.NCERT Reference: Page no. 260 (1st paragraph) of chapter 16 of NCERT

Q.6. Match the following structures with their respective location in organs.

Select the correct option from the following:    [NEET 2019]

Correct Answer is Option (d)Crypts of Lieberkhn are present in the small intestine, Glisson's capsule is present in the liver. Islets of Langerhans constitute the endocrine portion of pancreas. Brunner's glands are found in the submucosa of duodenum.So, the correct answer is '(A)-(iii), (B)-(iv), (C)-(i), (D)-(ii)NCERT Reference: Page no. 260 (1st paragraph), 260 (last paragraph), 262 (last paragraph) respectively of chapter 16 of NCERT

Correct Answer is Option (c) Goblet cells or mucous cells are present throughout the epithelium of gastric glands and secrete mucus, which protects the gastrointestinal lining from enzymatic action.

NCERT Reference: Page no. 262 (last paragraph) of chapter 16 of NCERT

Q.8. Match the items given in Column I with those in Column II and choose the correct option.    [NEET 2019]

Parietal cells indirectly help in erythropoiesis. Erythropoiesis is the phenomenon wherein human erythrocytes are formed. The process is stimulated by a hormone of the kidney (Juxtaglomerular cells) which is produced during hypoxia known as erythropoietin. The site of Erythropoiesis is in the bone marrow, here the differentiation of the hematopoietic stem cells occurs, which gradually get rid of its nuclei to turn into reticulocytes. The process involves a special functional differentiation and expression of genes.

Correct Answer is Option (c)The pancreatic juice contains sodium bicarbonate, three proenzymes: trypsinogen, chymotrypsinogen, and procarboxypeptidase and some enzymes such as elastase, pancreatic a-amylase, DNase, RNase and pancreatic lipase. It helps in the digestion of starch, proteins, fats, and nucleic acids.NCERT Reference: Page no. 262 (3rd paragraph) of chapter 16 of NCERT

Q.13. A baby boy aged two years is admitted to playschool and passes through a dental check-up. The dentist observed that the boy had twenty teeth. Which teeth were absent?    [NEET 2017](a) Canines(b) Pre-molars(c) Molars(d) Incisors

Correct Answer is Option (b)Boy aged two years will have milk teeth of man including 8 incisors, 4 canines, 8 molars. Premolars are absent.Note: This question is reasoning and understanding based on the topic.NCERT Reference: Page no. 257 and 258 “Alimentary canal” chapter 16 of NCERT for understanding the topic in detail

Q.14. Which hormones do stimulate the production of pancreatic juice and bicarbonate?     [NEET 2016](a) Angiotensin and epinephrine(b) Gastrin and insulin(c) Cholecystokinin and secretin(d) Insulin and glucagon

Correct Answer is Option (c)Cholecystokinin pancreozymin (CCKPZ) is a hormone secreted from the small intestine. It stimulates the gall bladder to release bile and the pancreas to secrete and release digestive enzymes in the pancreatic juice. Hormone secretin is secreted from the duodenum and releases bicarbonates in the pancreatic juice. It also increases the secretion of bile and decreases gastric secretion and motility.

Q16. Which of the following guards the opening of the hepatopancreatic duct into the duodenum?      [NEET 2016]

The sphincter of Oddi (also hepatopancreatic sphincter or Glisson's sphincter), abbreviated as SO, is a muscular valve that in some animals, including humans, controls the flow of digestive juices (bile and pancreatic juice) through the ampulla of Vater into the second part of the duodenum.

Q.19. The primary dentition in human differs from permanent dentition in not having one of the following types of teeth:    [NEET 2015]

Correct Answer is Option (a)The premolar teeth, or bicuspids, are transitional teeth located between the canine and molar teeth. There are two premolars per quadrant in the permanent set of teeth in humans, making eight premolars total in the mouth. The dental formula for milk teeth is 2102/2102 so premolars are absent in the primary dentition.

Correct Answer is Option (d)In humans, the milk protein digesting enzyme in the stomach is pepsin. In calves it is rennin. It is also present in small amounts in human infants but not adults. Pepsin acts on water soluble 'caseinogen' (milk protein) to form soluble 'casein'  This combines with calcium salts to form insoluble calcium paracaseinate, which gets readily digested  enzymatically.NCERT Reference: Page no. 262 (2nd paragraph) of chapter 16 of NCERT

Q21. Fructose is absorbed into the blood through mucosa cells of the intestine by the process called:    [NEET 2014](a) Active transport(b) Facilitated transport(c) Simple diffusion(d) Co-transport mechanism

Correct Answer is Option (b) Facilitated transport is a form of passive transport in which materials are moved across the plasma membrane by a transport protein down their concentration gradient e.g. glucose, fructose and amino acids. Hence, it does not require energy.NCERT Reference: Page no. 264 of topic “16.3 ABSORPTION OF DIGESTED PRODUCTS” of chapter 16 of NCERT

The document NEET Previous Year Questions(2014-21): Digestion & Absorption Notes | Study Biology Class 11 - NEET is a part of the NEET Course Biology Class 11.
All you need of NEET at this link: NEET