The document Dimensions (Formulae and Equations) - Units and Measurements, Class 11, Physics | EduRev Notes is a part of the NEET Course Physics Class 11.
All you need of NEET at this link: NEET

DIMENSIONAL FORMULAE AND DIMENSIONAL ANALYSISIn describing physical things and events quantitatively, we refer to numerical values of base quantities, and also introduce numbers derived by inserting these values into certain mathematical formulas.

The thermodynamic temperature, the amount of substance and the luminous intensity are denoted by the symbols of their units K, mol and cd respectively.The physical quantity that is expressed in terms of the base quantities is enclosed in square brackets.[sinθ] = [cosθ] = [tanθ] = [ex] = [M0L0T0] Fig: Four metric measuring devices: a tape measure in centimetres, a thermometer in degrees Celsius, a kilogram weight and a multimeter that measures volts, amperes and ohms

DIMENSIONAL FORMULAIt is an expression which shows how and which of the fundamental units are required to represent the unit of physical quantity.For example:By definition, Velocity is a derived quantity. We can write its dimensional formula using:Velocity = Displacement/timeNow, displacement is measured in Length, [L1] and time is measured in [T1] which are both fundamental quantities. Hence, we can represent the dimensional formula of velocity as:[v] = [s/t] = [L/T] = [LT-1]Similarly, we can evaluate dimensional formula of all physical derived quantities. The table given below shows some of the most occurring physical quantities and their dimensions. 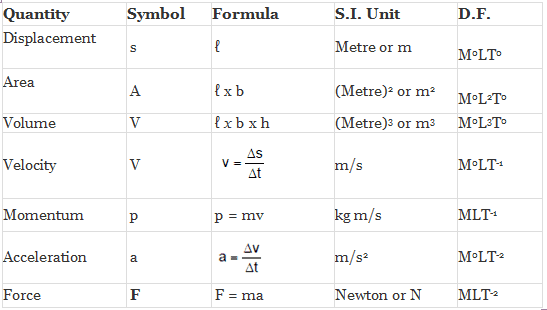 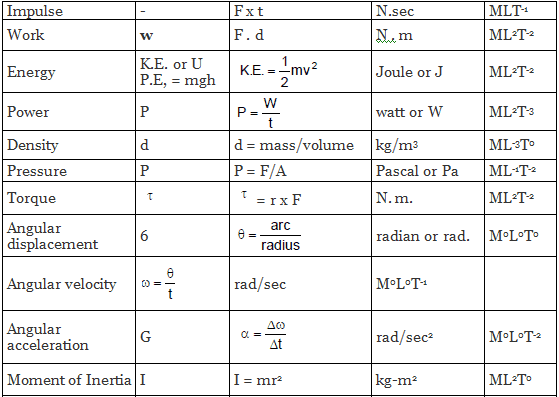 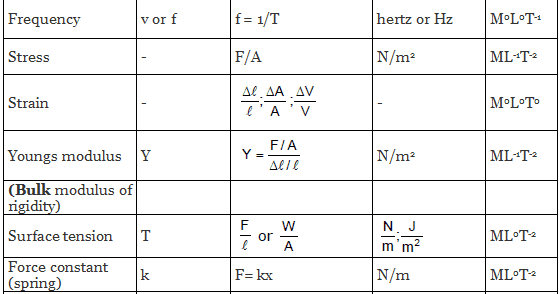 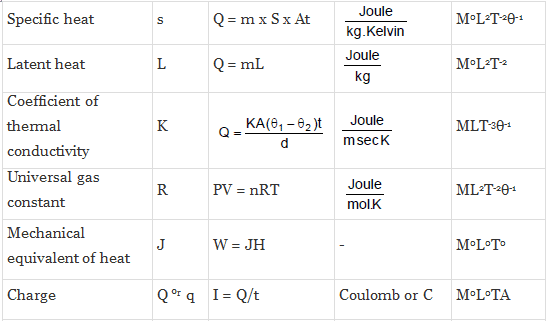 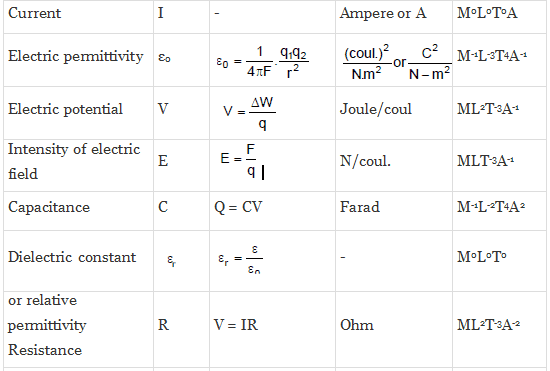 Applications of Dimensional Analysis(a) Conversion of units: This is based on the fact that the product of the numerical value (n) and its corresponding unit (u) is a constant, i.e.,n[u] = constantor n1[u1] = n2 [u2]Suppose the dimensions of a physical quantity are a in mass, b in length and c in time. If the fundamental units in one system are M1, L1 and T1 and in the other system are M2, L2 and T2 respectively. Then we can write.

Example 2. Show that the expression of the time period T of a simple pendulum of length l given by

As in the above equation, the dimensions of both sides are same. The given formula is dimensionally correct.

Note: The physical quantities separated by the symbols +, -, =, >, < etc., have the same dimensions.

Example 3. The velocity v of a particle depends upon the time t according to the equation

. Write the dimensions of a, b, c and d. Solution.From principle of homogeneity

(d) To establish the relation among various physical quantities: If we know the factors on which a given physical quantity may depend, we can find a formula relating the quantity with those factors. Let us take an example.

Experimentally, the value of k is found to be 1/2

Limitations of Dimensional Analysis The method of dimensions has the following limitations:(a) By this method the value of dimensionless constant can not be calculated.(b) By this method the equation containing trigonometrical, exponential and logarithmic terms cannot be analysed.(c) If a physical quantity depends on more than three factors, then relation among them cannot be established because we can have only three equations by equalizing the powers of M, L and T.