The document Dispersion of Light - Human Eye and Colourful World, Class 10, Science | EduRev Notes is a part of the Class 10 Course Science Class 10.
All you need of Class 10 at this link: Class 10

REFRACTION OF LIGHT THROUGH A PRISM

What is a prism? A prism is a transparent refracting medium bound by two plane surfaces inclined to each other at a certain angle (commonly 60° or 45°) .

How does light get refracted by a prism?The incident ray suffers a deviation (or bending) through an angle d due to refraction through the prism. The angle d is called the angle of deviation.Note :The prism is in the position of the minimum deviation when angle of emergence = angle of incidence.

The refractive index of the material of prism is given as:

DISPERSION OF WHITE LIGHT BY A GLASS PRISM: Thus, dispersion of white light into seven colours occurs because the lights of different colours bend through different angles while passing through a glass prism.

How is the dispersed white light recomposed? 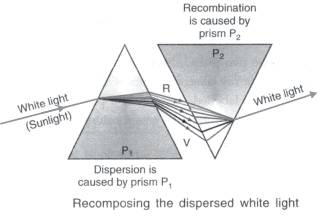 How does a rainbow form?Rainbow is an example of the dispersion of white light.Just after the rain, a large number of small droplets of water remain suspended in the air. Each drop acts like a small prism. When sunlight falls on these drops, the white light splits into seven colours. The dispersed light from a large number of drops forms a continuous band of seven colours. This coloured band is called rainbow. Thus, rainbow is produced due to dispersion of white light by small raindrops hanging in the air after the rain.

The rainbow is seen when the sun is behind the observer.