The document Wheatstone Bridge Class 12 Notes | EduRev is a part of the JEE Course Physics For JEE.
All you need of JEE at this link: JEE 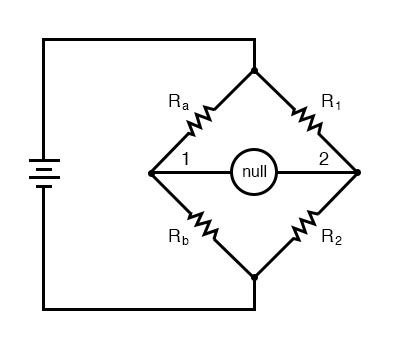 (iii) When key K1 is pressed, a current i flows from the cell. On reaching the junction A, the current i gets divided into two parts i1 and i2. Current i1 flows in the arm AB while i2 in arm AD. Current i1, on reaching the junction B gets further divided into two parts (i1 - ig) and ig, along branches BC and BD respectively. At junction D, currents i2 and ig are added to give a current (i2  ig), along branch DC. (i2 - ig) and (i2  ig) add up at junction C to give a current (i1  i2) or i along branch CE. In this way, currents are distributed in the different branches of bridge. In this position, we get a deflection in the galvanometer.

(iv) Now the resistance P,Q,R and S are so adjusted that on pressing the key K2, deflection in the galvanometer becomes zero or current ig in the branch BD becomes zero. In this situation, the bridge is said to be balanced.

(vii) It is clear from above equation that if ratio of the resistance P and Q, and the resistance R are known, then unknown resistance S can be determined. This is the reason that arms P and Q are called as ratio arms, arm AD as known arm and arm CD as unknown arm.

(viii) When the bridge is balanced then on inter-changing the positions of the galvanometer and the cell there is no effect on the balance of the bridge. Hence the arms BD and AC are called as conjugate arms of the bridge.

Ex.22 Find equivalent resistance of the circuit between the terminals A and B.

hence this is equivalent to

Ex.23 Find the equivalent resistance between A and B

Sol. This arrangement can be modified as shown in figure since it is balanced wheat stone bridge.

Find equivalent resistance ?Sol. Let potential at point B is x and E is Y

Applying KCl at point B

current from branches BC & EF adds up to give total current (i) flowing in the circuit.

Find the effective resistance between A & B ?

The original infinite chain is equivalent to R in series with R & RE in parallel.

Find the equivalent resistance between A & B ?

Therefore, Effective R between A & B.

On solving we get

Some circuits can be modified to have simpler solution by using symmetry if they are solved by traditional method of KVL and KCL then it would take much time.

Ex.26 Find the equivalent Resistance between A and B

The branches AC and AD are symmetrical

Therefore, current through them will be same.

The circuit is also similar from left side and right side like mirror images with a mirror placed alone CD therefore current distribution while entering through B and an exiting from A will be same. Using all these facts the currents are as shown in the figure. It is clear that current in resistor between C and E is 0 and also in ED is 0. It's equivalent is shown in figure (b)

Therefore,  The potential difference in R between (B, C) and between (B, D) is same VC = VD

This is called folding.

Now , it is Balanced Wheatstone bridge

Ex.27 Find the equivalent Resistance between A and B

Sol. In this case the circuit has symmetry in the two branches AC and AD at the input

Therefore, current in them are same but from input and from exit the circuit is not similar

Therefore, on both sides the distribution of current will not be similar.

hence C and D are same pointSo, the circuit can be simplified as

Ex.28 Find the equivalent Resistance between A and B

Here the circuit can be simplified as

Ex.29 Twelve equal resistors each R W are connected to form the edges of a cube. Find the equivalent resistances of the network.

(b) When current enters at 1 and leaves at 2

(c) When current enters at 1 and leaves at 3

Sol. If we cut the cube along the plane passing through 2, 4, 5, 7 then by mirror symmetry, the final configuration will be 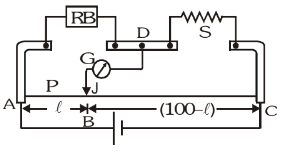