The document Work & Work Done by a Variable Force Notes | Study Physics For JEE - JEE is a part of the JEE Course Physics For JEE.
All you need of JEE at this link: JEE

Work Done by a Constant Force 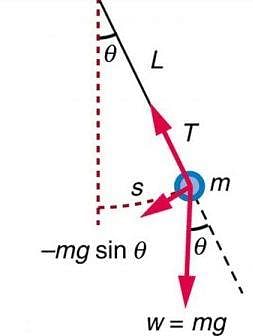 The tension in the string of a simple pendulum is always perpendicular to displacement. (Figure)

So, work done by the tension is zero.

➢ If the angle between force and displacement is acute (q < 90°), we say that the work done by the force is positive.

➢ If the angle between force and displacement is obtuse (q > 90°), we say that the work done by the force is negative. 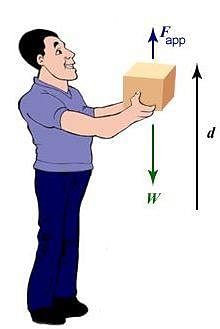 Fig: Forces acting on a box.

Try yourself:A body of mass 1 kg is rotating in a circular path of radius 1 m with constant velocity of 5 rev/sec. The work done in one complete revolution is
Explanation

Workdone is zero as Force and displacement is perpendicular

In cgs system, the unit of work is erg.

One erg of work is said to be done when a force of one dyne displaces a body through one centimetre in its own direction.

Note : Another name for joule is newton metre.

Relation between joule and erg:

Work has one dimension in mass, two dimensions in length and `-2' dimensions in time, On the basis of dimensional formula, the unit of work is kg m2 s-2.

If several forces act on a particle, then we can replace in equation

by the net force

This gives the work done by the net force during a displacement of the particle.

We can rewrite equation (i) as :

Q.1.  A block of mass M is pulled along a horizontal surface by applying a force at an angle q with horizontal. Coefficient of friction between block and surface is m. If the block travels with uniform velocity, find the work done by this applied force during a displacement d of the block.

Ans: The forces acting on the block are shown in Figure. As the block moves with uniform velocity the resultant force on it is zero. 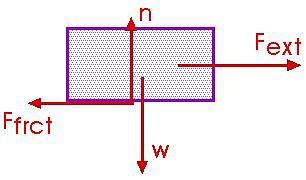 Work done by this force during a displacement d

Q.2. A particle moving in the xy plane undergoes a displacement

while a constant force

acts on the particle.

(a) Calculate the magnitude of the displacement and that of the force.

(b) Calculate the work done by the force.

Q.3. A block of mass m is placed on an inclined plane which is moving with constant velocity v in horizontal direction as shown in figure. Then find out work done by the friction in time t if the block is at rest with respect to the incline plane.

Ans: F.B.D of block with respect to ground.

Block is at rest with respect to wedge

Work done by friction for man A

Work Done by a Variable Force

Ans. Here the work done is only due to x component of force because displacement is along x-axis.

Ans. Small amount of work done dW in giving a small displacement is given by

➢ When F is given as a function of Time(t)

Let the displacement of the block be dx from t = t to t = t +dt then, work done by the force F in this time interval dt is.

Q.7. Force acting on a particle varies with x as shown in figure. Calculate the work done by the force as the particle moves from x = 0 to x = 6.0 m.

The document Work & Work Done by a Variable Force Notes | Study Physics For JEE - JEE is a part of the JEE Course Physics For JEE.
All you need of JEE at this link: JEE