Dual converter:  The name itself indicates that it has two converters in it. It is an electric device mostly found in variable speed drivers. It is a power electronics control system to get either polarity DC from AC rectification by the forward converter and reverse converter. In a dual converter, two converters are connected together back to back.One of the bridge works as a rectifier (converts AC to DC), another half bridge works as an inverter (converts DC to AC) and connected commonly to a DC load. Here two conversion processes take place simultaneously, so it is called as a dual converter. The dual converter can provide four quadrant operations. The four quadrant operation is shown below. 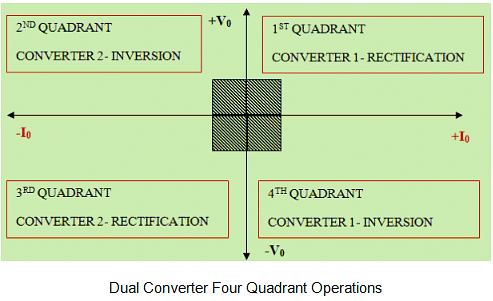 The dual converter basic principle of operation can be explained with reference to the simplified equivalent diagram of the DC circuit shown in the figure below. In this simplified representation, two assumptions are made. 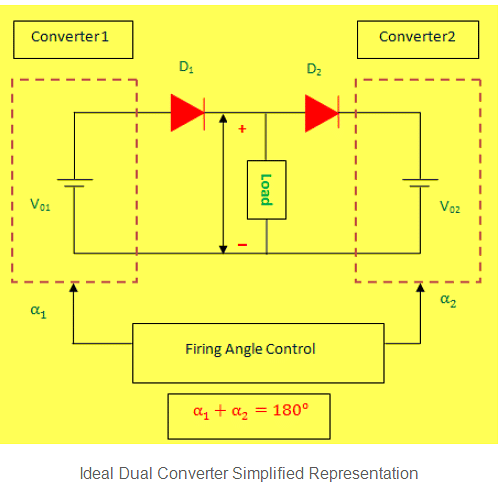 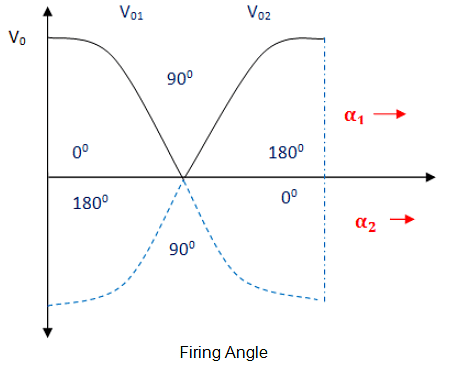 Modes of Operation of Dual Converter

Single Phase Dual ConverterThe blow shown figure shows single phase dual converter using thyristors. As explained above, in single phase dual converter we use single phase rectifier circuit for converting single phase AC into steady DC.The Converter 1 consists of Rectifier. Then the rectified DC fed to a filter which removes pulses from rectified DC and converts it to a pure DC by filtering.After that, this pure DC is fed to load and from the load, it is given to inverter circuit which converts this DC to AC and finally this AC of inverter taken as the output. 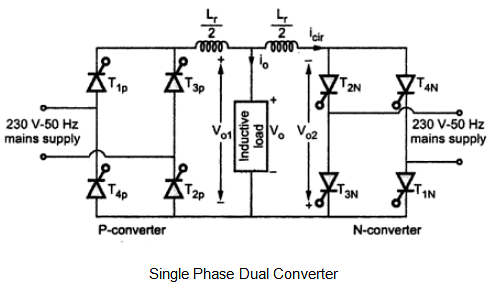 The output of three phase rectifier is fed to filter and after filtering the pure DC is fed to the load. At last, the supply from the load is given to last bridge that is inverted. It does the Invert process of the rectifier and converts DC into 3 phase AC, which is output. 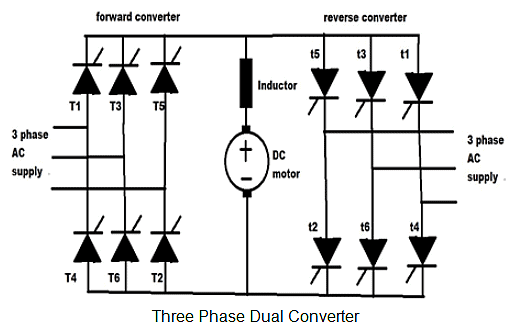 The dual converter is a power electronics control system to get either polarity DC from AC rectification by the forward converter and reverse converter. It can run a DC motors in either direction with speed control too.This single phase converter is achieved by using a pair of a thyristor controlled bridge (4 SCRs X 2) that enables the DC motor to get reversed polarity for either direction rotation and speed control also lowered in steps by Microcontroller triggering each bridge SCR bank of duly interfaced through Opto-isolators.A pair of switches is used to input logical signal for the desired output. If the input of 230 volt AC is given to the dual SCR Bridge we can have a 100-watt lamp load and the DC polarity across the lamp is checked or a low power DC motor of 220 volts can be used.This project uses 12-volt ac at the input and a 12 volt DC motor to verify either direction rotation as the polarity gets reversed.