The document Early Vedic Age UPSC Notes | EduRev is a part of the UPSC Course History for UPSC (Civil Services) Prelims.
All you need of UPSC at this link: UPSC

THE VEDIC AGEThe Vedic Age was between 1500 BC and 600 BC. This is the next major civilization that occurred in ancient India after the decline of the Indus Valley Civilization by 1400 BC. The Vedas were composed in this period and this gives this age the name. The Vedic Age started with the coming of the Aryans or Indo-Aryans.The meaning of the word Veda is “Knowledge”, the best of all knowledge in the eyes of Hindus. It is a collection of hymns, prayers, charms, and sacrificial formulae. There are 4 Vedas, namely, Rig Veda, Sama Veda, Yajur Veda and Atharva Veda. It consists of three successive classes of literary production.These three classes are(i) The Samhitas or Mantras: These are collections of hymns, prayers, charms, litanies, sacrificial formulas.(ii) The Brahmanas: A kind of Primitive theology and philosophy of Brahmanas.(iii) The Aranyaka and Upanishads: They are partly included in the Brahmanas or attached thereto and partly exist as separate work. They contain philosophical meditations of the hermits and ascetics on soul, God, world & man. It consists of three successive classes of literary production.There are four Vedas which are different from one another. (i) The Rigveda: The oldest Veda is the Rigveda. It has 1028 hymns called ‘Suktas’ and is a collection of 10 books called ‘Mandalas.’(ii) Samaveda: Known as the Veda of melodies and chants, Samaveda dates back to 1200-800 BCE. This Veda is related to public worship.(iii) Yajur Veda: Yajurveda dates back to 1100-800 BCE; corresponding with Samaveda. It compiles ritual-offering mantras/chants. These chants were offered by the priest alongside a person who used to perform a ritual.(iv) Atharva Veda: This Veda contains hymns many of which were charms and magic spells which are meant to be pronounced by the person who seeks some benefit, or more often by a sorcerer who would say it on his or her behalf.

Vedangas: Besides the Vedas, there is another class of works whose authorship is ascribed to human beings. They are known as Sutras or Vedangas. There are six vedangas. They are six subjects. These are shiksha (pronunciation), chhanda (metric), Jyotisha(astronomy), Kalpa(ritual), Vyakarana(grammar), Nirukta (explanation of words). During, early Vedic period (BC 1500-BC 1000), Aryans were organized into tribes rather than kingdoms. The chief of a tribe was called a rajan. The autonomy of the rajan was restricted by the tribal councils called Sabha and Samiti. The two bodies were, in part, responsible for the governance of the tribe. The rajan could not accede to the throne without their approval.

(ii) Economy: The concept of Varna, along with the rules of marriage, was made quite stiff. Social stratification took place, with the Brahmins and the Kshatriyas being considered higher than the Shudras and the Vaisyas. Cows and bulls were accorded religious significance. Aryans followed a mixed economy i.e. pastoral and agricultural in which cattle played a predominant part. Standard unit of exchange was Cow. At the same time coins were also there. (iii) Form of Government: Monarchy was the normal form of Government. Kingship was hereditary. But there was a sort of hierarchy in some states, several members of the royal family exercising the power in common. There were references of democratic form of government and their chiefs were elected by the assembled people.(iv) The King: The kingdom was small in extent. The king enjoyed a position of preeminence in the tribe. Kingship was hereditary. He was anointed by the priest as king in the ‘Abhisheka’ Ceremony. He wore gorgeous robes and lived in a splendid palace, gaily decorated than a common building. The king had the duty to protect the life and property of his people. The sacred duty of the king was the protection of the tribes and the territory and maintenance of priests for the performance of sacrifices. Maintenance of law and order was his principal duty. He maintained justice with the help of Purohit's. He collected tributes known as “Bali” in kind from his subjects.(v) Officials: In the work of administration the king was assisted by a number of functionaries like the Purohita (priest), the senani (general) the Gramani (village headman) and the spsa (spies). Purohita was the most important officer of the state. (vi) The Army: The army was mainly consisting of Patti (infantry) and Rathi's(chariots). The weapons used by the soldiers were bows, arrows, swords, axes and spears. These weapons were made up of irons. The soldiers were organized into units known as Sardha, Vrata and gala. (vii) Popular Assemblies: The Rig Veda mentions the names of two popular assemblies known as Sabha and Samiti. Though the king enjoyed substantial power yet he was not an autocrat. In the work of administration he consulted these two bodies and act according to their decision. Sabha was a select body of elders. The head of the sabha was known as ‘Sabhapati’.(viii) Social Life: The family was regarded as the social and political unit. It was the nucleus of the social life of the early Aryans. The father was the head of the family and he was known as “grihapati”. The Aryans had joint families. The father had great authority over the children. The Rig-Veda mentions the names of some learned ladies like Viswavara, Apala and Ghosa who composed mantras and attained the rank of Rishis. The girls were married after attaining puberty. The practice of ‘Swayamvara’ was also prevalent in the society. Monogamy was the general Practice. Remarriage of widows was permitted.(x) Education: In the Rig-Vedic age great importance was given to education. There were Gurukuls which imparted education to the disciples after their sacred-thread ceremony. Entire instruction was given orally. The Vedic education aimed at proper development of mind and body. The disciples were taught about ethics, art of warfare, art of metal and concept of Brahma and philosophy, and basic sciences like agriculture, animal husbandry, and handicrafts. (xi) Caste System: In the early Vedic age there was no caste system. Member of same family took to different arts, crafts and trades. People could change their occupation according to their needs or talents. There was hardly any restriction in intermarriage, change of occupation. There, was no restriction on taking of food cooked by the sudras.(xii) Agriculture: Reference in Rig-Veda shows, that agriculture was the principal occupation of the people. They ploughed the field by means of a pair of oxen. Rig-Veda even mentions that 24 oxen were attached to a plough share at the same time to plough the land. The ploughed land was known as Urvara or Kshetra. Water was supplied into the fields by means of irrigation canal. Use of manure was known to them. Barley and wheat were mainly cultivated. Cotton and oil seeds were also grown. Rice was perhaps not extensively cultivated. Agriculture was their main source of income.(xiii) Domestication of animals: Besides agriculture, cattle breeding was another means of living. There are prayers in the Vedas for Gosu (cattle). Cows were held in great respect. Cows were symbols of wealth and prosperity of the Aryans. Sometimes cow was the medium of exchange. The Aryans had also domesticated animals like horse, ox, dog, goat, sheep, buffalo and donkey. (xiv) Occupation: Apart from agriculture and animal husbandry Aryans had also other occupation. Weaving was the most important occupation. We learnt about weavers of wool and cotton together with the workers in the subsidiary industries of dying and embroidery. The carpenters built houses, chariots, wagons and supplied household utensils and furniture.(xv) Trade and Commerce: There were trade and maritime activity. Sometimes traders made journey to distant lands for larger profits in trade. There was probably commercial intercourse with Babylon and other countries in Western Asia. The principal media of trade was barter. Cow was used as unit of value. Gradually pieces of gold called “nishka” were used as means of exchange. Trade and commerce were regulated and managed by a group of people called “Pani”. (xvi) Transport and Communication: The chief means of transport by land were rath (Chariots) and wagons drawn by horses and oxen. Riding on horseback was also in vogue. (xvii) Religion: Rishis, composers of the hymns of the Rig Veda, were considered to be divine. The main deities were Indra, Agni (the sacrificial fire), and Soma. People also worshipped Mitra-Varuna, Surya (Sun), Vayu (wind), Usha (dawn), Prithvi (Earth) and Aditi (the mother of gods). Yoga and Vedanta became the basic elements of the religion. 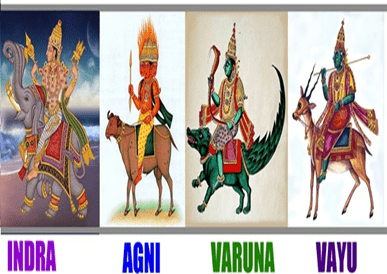