The document Ecology - Geography Notes | EduRev is a part of the UPSC Course Geography for UPSC CSE.
All you need of UPSC at this link: UPSC

DIVERSE FLORA AND FAUNAIndia has a rich heritage of biological diversity (rich and diverse strains of flora and fauna)– immense range of ecosystems, species (some 1.3 lakh recorded) and genetic forms (50,000 varieties of rice alone)– by virtue of its tropical features.

(i) To conserve diversity and integrity of plants, animals and micro-organisms.

(iii) To provide facilities for education, awareness and training. 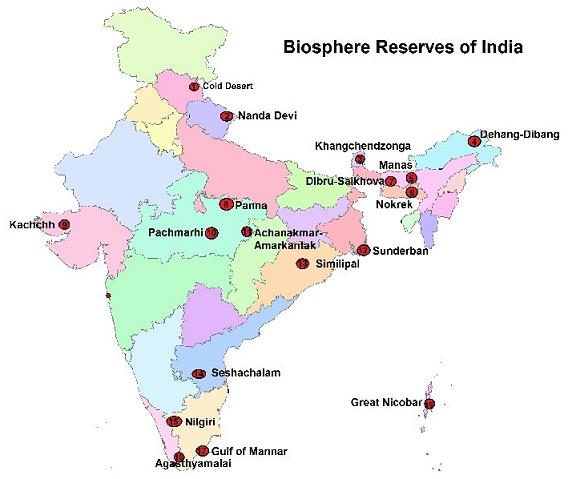 Fourteen potential sites were identified for setting up biosphere reserves in the country of which eight have been established viz, Nilgiri, Nanda Devi, Nokrek, Great Nicobar, Gulf of Manar, Manas, Sunderbans and Similipal. Others proposed to be set up are Namadpha, Kanha, Uttarakhand, Thar desert, Kaziranga and the little Rann of Kutch. Comprehensive guidelines have been prepared which emphasize on formulation of eco-development and demonstration projects,  development of database, conservation plans of key species, establishment of research stations and implementation of social welfare activites. NGOs will be involved in the biosphere reserve programme for creation of public awareness. Latest technologies like remote sensing in studying the reserves will be used.

Wetlands its usefulness and conservationWetlands, one of the most useful resource system, are areas which are characterised by presence of water and a water-saturated soil – either permanently or for a part of the year. 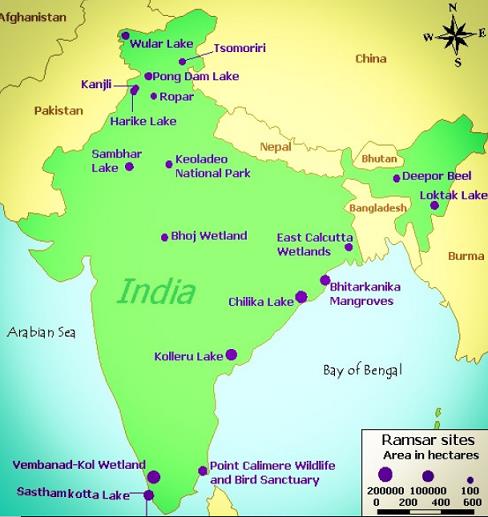 According to the Ramsar Convention on Wetlands, of which India is a signatory, wetlands are areas of marshes, fens, peatland or water, natural or artificial, permanent or temporary with water that is static or flowing, fresh, brackish or saline including areas of marined water, the depth of which at low tide does not exceed six metres.

Importance of Wetlands
Wetlands are useful in a number of ways:(i) They are habitat of endangered and rare species of birds, animals, plants and insects.(ii) They sustain migratory birds and waters.(iii) As an ecosystem they are useful for nutrient recovery and cycling, releasing excess nitrogen, deactivating phosphates, removing toxins, chemicals and heavy metals through absorption by plants and also in the treatment of wastewater.(iv) Retention of sediments by wetlands which reduces siltation of rivers.(v) Wetlands help in mitigating floods, recharging aquifers and reducing surface run-off and consequent erosion. 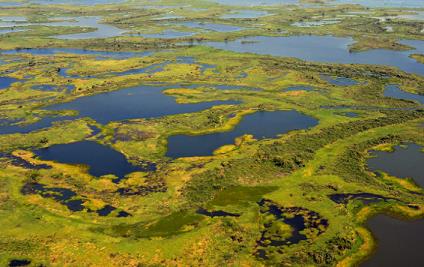 Wetland(iv) Retention of sediment by wetlands which reduces siltation of rivers.
(v) Wetlands help in mitigating floods, recharging aquifers and reducing surface run-off and consequent erosion.(vi) Mangrove wetlands act as buffer against devastating storms.(vii) Wetlands influence the microclimate of the locality in addition to checking of underground saltwater intrusion on an adjacent brackish water environment through interface pressure.

Distribution of Wetlands
India has a wealth of wetland ecosystems primarily because of variability in climate conditions and changing topography. They are distributed in different geographical regions ranging from the cold arid zone of Ladakh to wet humid climate of Imphal; warm arid zone of Rajasthan to tropical monsoonic central India and wet and humid zone of southern peninsula. Most of the wetlands are directly or indirectly linked with major river systems such as Ganga, Brahmaputra, Narmada, Cauvery, Tapti, Godavari etc.

Conservation of Wetlands
To ensure conservation of wetlands which are important for ecological processes as well as for their rich flora and fauna, an International Convention was held in Ramsar (Iran) in 1971, to provide a framework for international cooperation for the conservation of wetland habitats.In India National Wetlands Management Committee, which advises the government on policies and measures for conservation and management of the wetlands, has identified 21 wetlands for priority action. These are: Kolleru (AP), Wullar (J&K), Chilka (Orissa), Loktak (Manipur), Bhuj (MP), Sambhar and Pichola (Rajasthan), Ashtamudi and Sasthamotta (Kerala), Harike and Kanjli (Punjab), Kabar (Bihar), Nalsarovar (Gujarat) and Sukhna (Chandigarh). Nodal research/academic institutions have been identified for each of the selected wetlands.

The action plan for wetlands development include: (i) Survey and Mapping(ii) Soil conservation measures EstuariesEstuaries, an integral part of the coastal environment, are the outfall regions of the river, making the transitional zone between the fluvial and marine environs. According to Pitchard, An estuary is a semienclosed coastal body of water which has a free connection with the open sea and within which seawater is measurably diluted with freshwater derived from land drainage'. Besides salinity, other parameters that influence the characteristics of an estuary are turbidity, tides, river flow and land drainage. 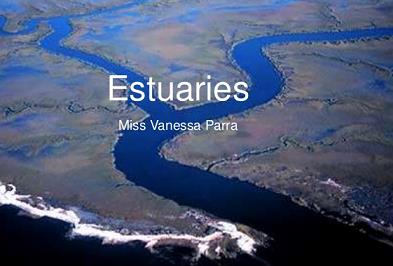 EstuariesEstuaries are an important source of natural resources for man and are used for commercial, industrial and recreational purposes. They are the nursery ground for dams and oysters and a variety of shrimps and fin fishes. India has 113 major and minor rivers and their combined length is 45,000 km. The considerable ecological imbalance has been caused in the estuary ecosystem due to human interference that has finally led to the disappearance of their flora and fauna. Release of untreated municipal wastewater and industrial effluents into these water bodies leads to serious water pollution including heavy metal pollution, which gets biomagnified and reaches man through food-chain. Overfishing and artificial introduction of species also lead to the imbalance of the estuarine ecosystem.

LagoonsLagoons are special type of ecosystems comprising the coastal and open ocean waters having a channel or a series of channels, through which the water is exchanged with the adjacent water body. Lagoons may be of saltish or brackish water. Lagoons are of two types

(i) Coastal lagoon which is a shallow coastal water body separated from the ocean by a barrier, connected atleast intermittently to the ocean by one or more restricted inlets, and usually oriented shore parallel (Phelger's definition), and (ii) Atoll lagoon is a lake-like stretch of water, enclosed in a coral atoll or coral reef, in the shape of a ring or of a horseshoe.

Blue lagoon in LakshadweepIn India, the coastal lagoons are misused by the people as dumping sites for industrial and domestic waste. Human interference in the lagoons for longer periods is due to the slow flushing rate and shallowness of lagoons. The impact of disturbances like sedimentation, pollution, eutrophication, erosion and overfishing in the lagoons are difficult to assess. Dredging channels to accommodate the navigating vessels into the lagoons generate huge quantitative and qualitative changes in the lagoonal flora and fauna. The various industries which are situated near the coastal lagoons release cold and waste-water into the lagoons which are changing the animal associations in the lagoon systems.

Forest Policy and lawIndian Forest Policy that dates back to 1894 underwent revision in 1952 and again in 1988. The revised forest policy of 1988 emphasises protection, conservation and development of forests. Its objectives are :

(i) Maintenance of environmental stability and ecological balance.

(iii) Check on soil erosion and denudation in catchment area.

(iv) Check on extension of sand dunes in desert areas of Rajasthan and along coastal tracts.

(vii) Increase in productivity of forest to meet the national needs.

(ix) Steps to create massive people's movement with involvement of women to achieve the objectives and minimise pressure on existing forests.The Forest (Conservation) Act, 1980 enacted to check indiscriminate deforestation, diversion of forest lands for non-forestry purpose was amended in 1988 to make it more stringent by prescribing punishment for violations.

Social ForestryThe National Forest Policy of 1952 aimed at increasing forest cover in the country to 33% of the total land area. Far from expanding, the area under forest has declined owing to expanding industrialisation, urbanisation, growth of population and illegal cutting of trees. The large scale deforestation apart from other evils have resulted in acute scarcity in rural areas. The lack of fuelwood is supplemented by use of cowdung and residues which means loss of manure to the soil. In order to avoid deforestation and its adverse effects the government introduced a concept, 'Social Forestry', the objectives of which were spelt out by the National Commission on Agriculture (1976) as :(i) To increase green cover.(ii) To produce and supply fuelwood, fodder, small timber and minor forest produce to rural section.(iii) To produce raw materials for industries.(iv) And to create employment in rural areas through afforestation.There are three main components of social forestry:(i) Farm forestry: Farmers are encouraged to plant trees on their own farms with free or subsidised seedlings supplied by the forest.(ii) Rural (or Community) forestry: Trees are planted by the communities themselves on community lands to be shared equally by the villagers. This is the self-financing component of the social forestry project.(iii) Urban (or Public) forestry: The forest department undertakes the planting of fast-growing trees along roadsides canal, tanks and other such public lands for the needs of the community.In a way, social forestry combines idle land, labour and water resources for optimum production of firewood, fodder, food, manure, and small constructional timber. It essentially involves monolithic integration of forestry, agriculture and animal husbandry.A massive social forestry programme was launched in 1980-81 in 101 districts of the country which were deficient in fuelwood. This programme included 'Rural fuelwood plantation' and 'A tree for every child'. It is a centrally sponsored programme with technical assistance from Canada and Sweden. The World Bank provided financial support for the programme.

Analysis of Programme(i) Only farm forestry, one component of social forestry programme, has been successfully implemented.(ii) The programme has completely neglected the primary objective of ensuring for all rural households and the landless in rural areas ready access to fuelwood and fodder for domestic consumption and thereby(a) reduce the time women and children spend daily in collecting fuelwood;

(b) prevent the use of animal dung as fuel. Under the programme trees are planted more as a commercial investment and not to fulfil basic survival needs of fuels and fodder of the rural folk. In fact the programme has worsened the energy crisis of landless labourers and intensified fodder problem by encouraging the plantation of hybrid eucalyptus which even animals do not touch.(iii) It has not made any real effort to involve the landless and the tribals in afforestation.(iv) It has done little for ecological restoration, for enhancing soil fertility and for water conservation.(v) No serious efforts have been made to create proper awareness among people.

Measures for Controlling Soil Degradation:
(i) Regeneration of wastelands, particularly CPR of communities.

(ii) Sharing of the costs and the benefits from regeneration of land and availability  of finance, should be just and well defined.
(iii) Soil conservation technologies to be adopted. The Indian government has established a National Wastelands Development Board in May 1985.