The document Elasticity, Stress and Strain and Stress-Strain Curve , Class 11, Physics | EduRev Notes is a part of the Class 11 Course Physics For JEE.
All you need of Class 11 at this link: Class 11

In a solid, atoms and molecules are arranged in such a way that each molecule is acted upon by the forces due to the neighbouring molecules. These forces are known as inter molecular forces.

The property of the body to regain its original configuration (length, volume or shape) when the deforming forces are removed, is called elasticity. Spring-ball model for the illustration of elastic behavior of solids

The change in the shape or size of a body when external forces act on it is determined by the forces between its atoms or molecules. These short range atomic forces are called elastic forces.

➤ PlasticityThe inability of a body to return to its original size and shape even on removal of the deforming force is called plasticity and such a body is called a plastic body.

Try yourself:The ability of the material to deform without breaking is called:
Explanation

The quality of being easily shaped or moulded is called Plasticity. So Plasticity is the ability of the material to deform without breaking.

Stress is defined as the ratio of the internal force F, produced when the substance is deformed, to the area A over which this force acts. In equilibrium, this force is equal in magnitude to the externally applied force. In other words,

The SI Unit of stress is newton per square meter (Nm-2).In CGS units, stress is measured in dyne cm-2. Dimensional formula of stress is ML-1T-2 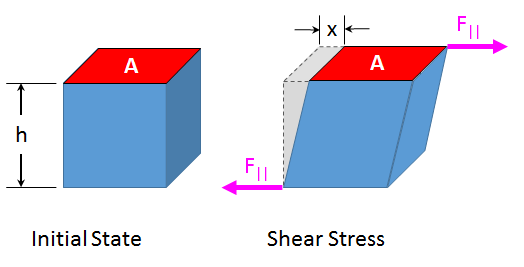 Try yourself:A 20kg load is suspended by a wire of cross section 0.4mm2. The stress produced in N/m2 is :
Explanation

It is defined as the ratio of the change in size or shape to the original size or shape. It has no dimensions, it is just a number.

Strain is of three types:1. Longitudinal strain: If the deforming force produces a change in length alone, the strain produced in the body is called longitudinal strain or tensile strain. It is given as:

2. Volumetric strain: If the deforming force produces a change in volume alone, the strain produced in the body is called volumetric strain. It is given as: 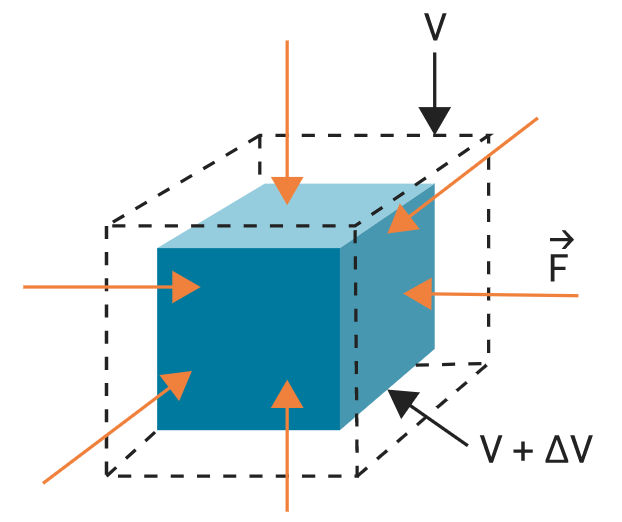 Volumetric strain3. Shear strain: The angle tilt caused in the body due to tangential stress expressed is called shear strain. It is given as:

The maximum stress to which the body can regain its original status on the removal of the deforming force is called elastic limit.

Shearing strain is given by the tangent of angle by which it is sheared, which is equal to deformed length in direction of force divided by the height perpendicular to the application of force.

Hooke’s law states that, within elastic limits, the ratio of stress to the corresponding strain produced is a constant. This constant is called the modulus of elasticity. Thus,