A closed path in which a current can flow is called an electric circuit. An electric circuit may have one or more electric elements such as bulbs (or lamps), cells, switches (or plug keys), metal wires, etc. Each element of a circuit has a specific function to play. For example, wires can be used to connect one element to the next. And a plug key or a switch can be used to either complete or break the closed path, thereby starting or stopping the current in the circuit.Some common circuit elements and their symbols. 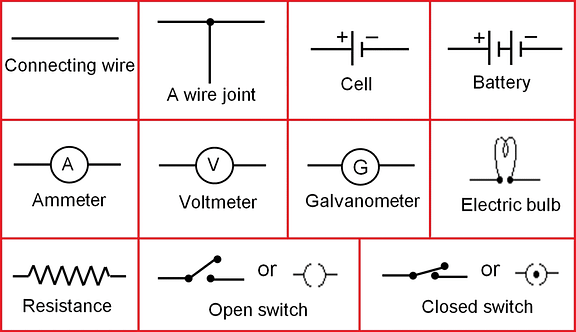 The electric current in a circuit is measured by an instrument called the ammeter, and the potential difference between two points in it is measured by a voltmeter (in voltage stabilizers). In these meters, a needle moving over a graduated scale gives the value of the measured quantity. Each meter has two terminals. The terminal marked '+' is connected by a wire to the higher-potential side of a circuit, while the terminal marked '- ' is connected to the lower-potential side. 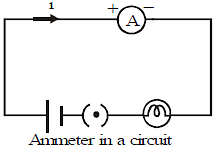 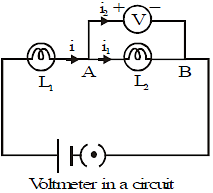 Two or more electric elements are said to be connected in parallel if the same potential difference exists across them.

The electric current through a metallic element or wire is directly proportional to the potential difference applied between its ends, provided the temperature remains constant.

If a potential difference V is applied to an element and a current i passes through it,

Here R is a constant for the given element (metallic wire) at a given temperature and is called its resistance. It is the property of a conductor to resist the flow of charges through it.

So, for a given potential difference,

Potential difference is measured in volts, and current is measured in amperes. From Equation, R = V/i. So, the unit of resistance is volt/ampere. This unit is called the ohm, and its symbol is W. We can define one ohm as follows.

If a potential difference of 1 volt is applied across an element, and a current of 1 ampere passes through it, the resistance of the element is called 1 ohm.

Factors on which the Resistance of a Conductor Depends

The resistance of the conductor depends

(ii) on its area of cross-section, and

(iii) on the nature of its material.

Combining eqs. we get

Where ρ(rho) is a constant of proportionality and is called electrical resistivity of the material of the conductor. The SI unit of resistivity is Ωm.