for such a system such that:

conventionally, represents the direction from –q to +q.Axis of a dipole is the line joining –q to +q

Q. Why are we defining a dipole? Why can’t we treat it as simply two charge system? Why are we giving it special treatment?Ans. Dipole is commonly occurring system in nature. We need to generalize our results in context with the dipole system to avoid repeated single point charge calculations using Coulomb’s Law. After these results we would be able to directly apply simplified results derived here to dipole systems.

Calculation of Electric Field due to an Electric Dipole

1. Field of an electric dipole at points in equatorial planeWe now find the magnitude and direction of electric field due to dipole. 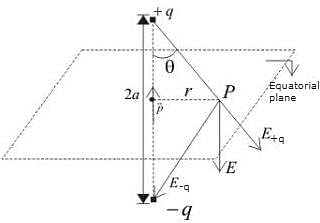 and they are equal in magnitude. Note that

Substituting the values of

calculated above also, by geometry,

We know that, by definition,

Observe, the - sign, it represents that electric field at the equator is in the opposite direction to the dipole moment of the electric dipole i.e. +q to –q.

2. Field of an electric dipole for points on the axis

As we know that, by definition of dipole moment,

Note: Dipole field at large distances falls off as 1/r3.

Now, we can generalize the calculation of electric field at any general point in space due to the dipole using the above results.

Any general point in space, can be located using the polar coordinates r and 𝜃, where the origin can be placed at the center of the dipole, as shown in the above figure.

Now, for any general point P in space located at distance r from centre and inclined at an angle 𝜃 with the axis of the dipole, we can imagine components of the original dipole with dipole moment

such that the P lies on the equator of one component and on the axis of the other component. 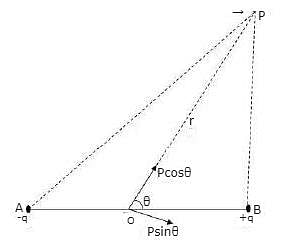 is the component of the original dipole moment, such that point P is located on the axis of this dipole, i.e.

One of the component will be along the axial component of electric dipole i.e.

and the other component will be along the equatorial component of electric dipole i.e.

ELECTRIC FIELD DUE TO A DIPOLEThe electric field due to a pair of equal and opposite charges at any test point can be calculated using the Coulomb’s law and the superposition principle. Let the test point P be at a distance r from the center of the dipole. The distance between +q and -q is d. We have shown the situation in the diagram below. 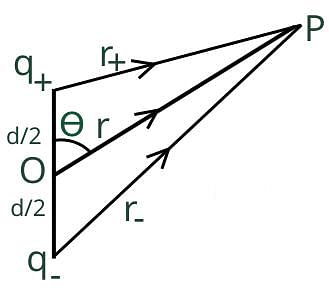 at Point P can be calculated by using the superposition principle.

Please note that the directions of

respectively. This is the most general form of the electric field due to a dipole. However, we will express this vector in terms of radial and inclination vectors as shown in the diagram below. 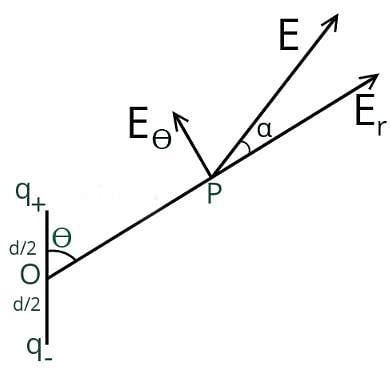 In order to calculate the electric field in the polar coordinate, we will use the expression of the electric potential due to an electric dipole which we have calculated earlier. 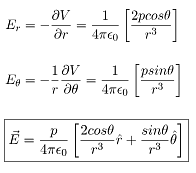 The resultant electric field at point P is 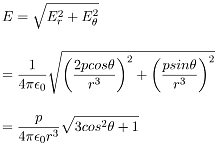 As shown in the diagram, the resultant electric field makes an angle \alpha with the radial vector. Then

ELECTRIC FIELD AT AN AXIAL POINT

In this case, the test point P is on the axis of the dipole. Consequently θ= 0 or π. The electric field at point P is

Electric field at point P due to negative charge is

ELECTRIC FIELD AT AN EQUATORIAL POINT 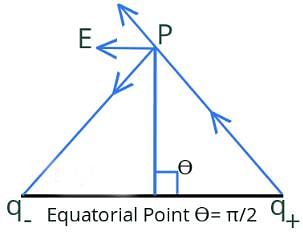 In this case, the test point P is on the perpendicular bisector of the dipole. Consequently θ= π/2. The electric field at point P is

Electric field at point P due to negative charge is

How do we measure a solid angle? Let us consider how do we measure a plane angle. See fig. We draw a circle of any radius r with the centre at O and measure the length 𝑙 of the arc intercepted by the angle.The angle 𝜃 is then defined as 𝜃 = 1/r. In order to measure a solid angle at the point O (fig.), we draw a sphere of any radius r with O as the centre and measure the area S of the part of the sphere intercepted by the cone. The solid angle Ω is then defined as Ω = S/r2

Note: That this definition makes the solid angle a dimensionless quantity. It is independent of the radius of the sphere drawn.

See fig. As we gradually close the curve, the angle finally diminishes to zero. A closed curve subtends zero angle at an external point. Similarly, a closed surface subtends zero solid angle at an external point.APPLICATION OF SOLID ANGLEQ. Fraction of light emerging from an isotropic point source through a conical region having semi vertex angle 𝛼 and with its apex at the source.Ans. Let us consider a sphere of radius R with its centre at the source S.

Let AB be the section (circular) where the cone ASB intercepts the sphere. If ΔS be the area of the spherical portion ACB (lying within the conical region) then, the solid angleΩ = ΔS/R2Let SC be the symmetry axis of the portion of the sphere ACB.If x be the distance of a thin circular strip then its areadS = 2𝜋 x Rd𝜃= 2𝜋 (Rsin 𝜃) Rd𝜃Total Area,ΔS = ∫ dS

This relation between plane angle 𝛼 and solid angle 𝛀 is advised to be remembered.If Ω steradian be the solid angle for the cone then, the fraction of light passing through the cone will be

The document Electric Dipole Notes | Study Physics For JEE - JEE is a part of the JEE Course Physics For JEE.
All you need of JEE at this link: JEE
Join Course