The document Electrical Properties: Conductors, Insulators & Semiconductors Class 12 Notes | EduRev is a part of the Class 12 Course Chemistry Class 12.
All you need of Class 12 at this link: Class 12

What is Electrical Conductivity?

The electrical properties of solids are measured in terms of conductivity. Conductivity may be defined as Try yourself:According to the band theory, increase in number of atoms participating in crystal formation leads to ________ in number of molecular orbitals containing electrons.
Explanation

Electrical Conductivity on the Basis of Energy Bands

On the basis of conduction of electricity, solids can be broadly divided into three categories: Variation of Energy in Insulators 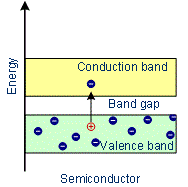 Try yourself:A substance containing one band completely filled with electrons and other band completely empty, but with a possibility of the empty band becoming populated, behaves as a _________
Explanation

Conduction of Electricity in Semiconductors

Try yourself:For a metallic crystal, which band do the delocalized electrons occupy?
Explanation