The document DC Pandey Solutions: Electrostatics - 1 Notes | Study Physics Class 12 - NEET is a part of the NEET Course Physics Class 12.
All you need of NEET at this link: NEET

Q.1. Is attraction a true test of electrification?

Ans. Due to induction effect, a charged body can attract a neutral body as shown below.

Body-1 is positively charged and body-2 is neutral. But we can see that due to distance factor attraction is more than the repulsion.

Q.2. What is the total charge, in coulombs, of all the electrons in a three-gram mole of hydrogen atoms? 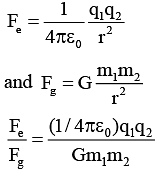 Units and dimensions can be found by above equation.

Q.3. Three point charges q are placed at three vertices of an equilateral triangle of side a. Find magnitude of electric force on any charge due to the other two.Ans. 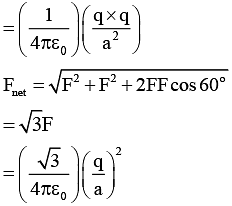 Q.4. Three point charges each of value +q are placed on three vertices of a square of side a metre. What is the magnitude of the force on a point charge of value-q coulomb placed at the centre of the square?Ans.

Q.5. Is there any lower limit to the electric force between two particles placed at a certain distance?Ans.

Ans. Two forces are equal and opposite.

Q.1: The electric field of a point charge is uniform. Is it true or false?

Ans. Electric field lines are not parallel and equidistant.

Q.2. Electric field lines are shown in Fig.. State whether the electric potential is greater at A or B.

Q.3. A charged particle always move in the direct ion of electric field. Is this statement true or false?

Ans. If charged particle is positive, and at rest. Electric field lines are straight then only it will move in the direction of electric field.

Q.5. The figure shows some of the electric field lines due to three-point charges q1, q2, and q3 of equal magnitude. What are the signs of each of the three charges?

Q.6. Four particles each having a charge q, are placed on the four vertices of a regular pentagon. The distance of each corner from the centre is a. Find the electric field at the centre of the pentagon.

Ans. In case of five charges at five vert ices o f regular pentagon net electric field at centre is zero. Because five vectors of equal magnitudes from a closed regular pentagon at shown in figure (i).

Where one charge is removed. Then one vector

Q.7. A circular wire loop of radius R carries a total charge q distributed uniformly over its length. A small length x( << R) of the wire is cut off. Find the electric field at the centre due to the remaining wire.Ans.

If loop is complete, then net electric field at centre C is zero. Because equal and opposite pair of electric field vectors are canceled.If PQ portion is removed as shown in figure, then electric field due to portion RS is not cancelled. Hence electric field is only due to the option RS.∴

The document DC Pandey Solutions: Electrostatics - 1 Notes | Study Physics Class 12 - NEET is a part of the NEET Course Physics Class 12.
All you need of NEET at this link: NEET