Emulsions and Colloids around Us Class 12 Notes | EduRev

: Emulsions and Colloids around Us Class 12 Notes | EduRev

The document Emulsions and Colloids around Us Class 12 Notes | EduRev is a part of the Course Chemistry for JEE. 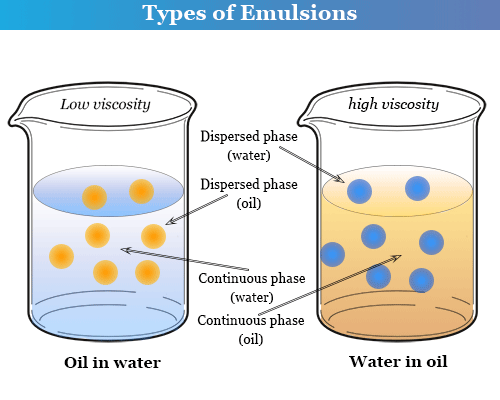 The type of emulsion obtained by agitating two immiscible liquids depends upon the relative amounts of two components liquids. The liquid that is in excess forms the dispersion medium. Thus, the two types of emulsions can be inter-converted into each other by changing the concentration of one of the liquids.The distinction between two types of Emulsions

The two types of emulsions may be distinguished from each other in a number of ways.

Emulsification is the process which involves the preparation of emulsion. Generally, an emulsion is prepared by subjecting a mixture of the immiscible liquid to a distinct layers upon standing. The oil globules rise to form an upper layer while aqueous medium forms lower layers. To prevent the separation of layers and to get the stable emulsion, a small quantity of the third substance is added. This substance that stabilizes the emulsion is called emulsifier or emulsifying agent. The commonly used emulsifying agents are soaps, detergents and lyophilic colloids. Casein, a lyophilic colloid present in milk, acts as an emulsifier as it forms a protective layer around fat molecules dispersed in water. Hence milk is a fairly stable emulsion.Function of Emulsifier

In a soap, RCOONa, R is the non-polar end, whereas COO— Na  is the polar end.Properties of Emulsion

(ii) Like colloidal particles, emulsions exhibit properties such as Tyndall effect, Brownian movement (provided the particles are not too large), electrophoresis, coagulation, etc.Demulsification

The process which involves the breaking of an emulsion into two separate liquid layers is called demulsification. The following methods may be used to bring demulsification:

(7) The emulsion of asphalt in water is used in road making and building.Gels

Colloids around UsApplication of Colloids 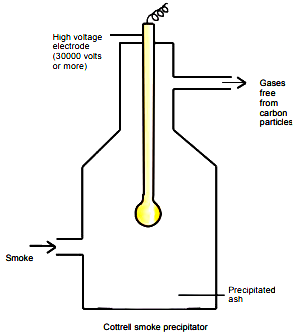 In, the smoke is made to pass through chambers fitted with highly electrically charged plates which precipitate the carbon and dust particles leaving in the gases to escape through chimney (figure).