The document Endogenetic Forces - Physical Geography; UPSC; IAS UPSC Notes | EduRev is a part of the UPSC Course Geography (Prelims) by Valor Academy.
All you need of UPSC at this link: UPSC

They are divided into-

e.g. the raised sea beaches along east coast of India to a height of 15-30 metre above sea level are observed. 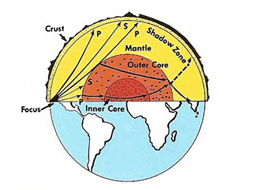 A volcano is a vent or opening through which heated materials consisting of gases, water, lava and fragments of rocks are comes out from the highly heated interior to the surface of the earth.

Volcanoes are classified under different scheme:

Cinder Cone: - they are of low height and are formed of volcanic dust, ashes and pyroclastic matter. Its formation takes place due to the accumulation of finer particles around the volcanoes vent.