Energy Stored in a Charged capacitor 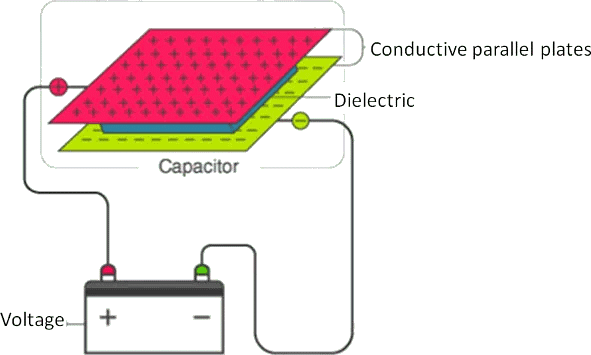 Now, work done in bringing a small charge dq at this potential is,

Therefore, total work done in charging it from 0 to q0 is,

This work is stored as the potential energy,

Further by using q0 = CV0 we can write this expression also as,

In general if a conductor of capacity C is charged to a potential V by giving it a charge q, then

3.1 Energy Density of a Charged Capacitor

This energy is localized on the charges or the plates but is distributed in the field. Since in case of a parallel plate capacitor, the electric field is only between the plates, i.e., in a volume (A × d), the energy density

The method for the calculation of capacitance involves integration of the electric field between two conductors or the plates which are just equipotential surfaces to obtain the potential difference Vab. Thus,

Q = charge flow in the battery

Now energy on the capacitor

Therefore, Energy dissipated in form of heat (due to resistance)

Ex.3 At any time S1 switch is opened and S2 is closed then find out heat generated in circuit.

Ex.4 (a) Find the final charge on each capacitor if they are connected as shown in the figure.

(b) Find heat loss in the above circuit.

By charge conservation on plates A and C before and after connection.

The loss of energy is in the form of Joule heating in the wire.

Derivation of above formulae :

Let potential of B and D is zero and common potential on capacitors is V, then at A and C it will be V.

when oppositely charged terminals are connected then

(i) How much charge flows in the circuit.

(ii) How much heat is produced in the circuit.

Sol. Let potential of B and D is zero and common potential on capacitors is V, then at A and C it will be V. 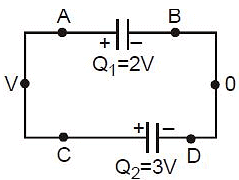 Now final charges on each plate is shown in the figure.

Sol. Let potential of B and C is zero and common potential

on capacitors is V, then at A and D it will be V

Now charge on each plate is shown in the figure.

The document Energy Stored in a Capacitor Notes | Study Physics Class 12 - NEET is a part of the NEET Course Physics Class 12.
All you need of NEET at this link: NEET
Join Course