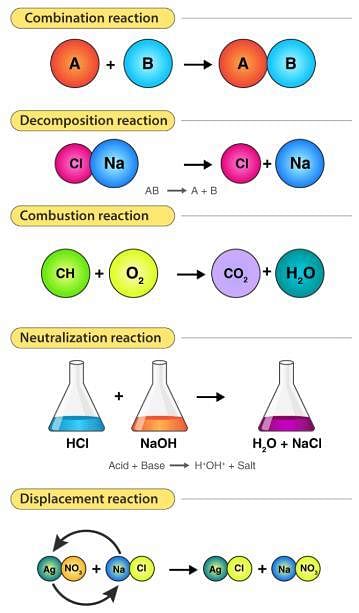 Fig: Types of chemical reaction(1) Combination reaction: The reaction in which two or more substances combine to form a single new substance are called combination or synthesis reaction.(e after pic always and before and after equation)

(e)(iii) Combination of two compounds to form a new compound:- 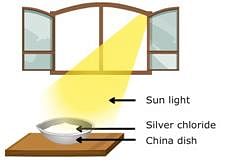 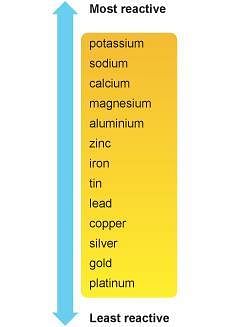 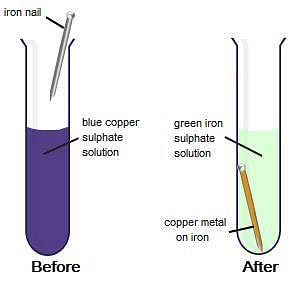 Iron, zinc and lead are more reactive elements than so they displace copper from its compounds.

Ques : In the refining of silver, the recovery of silver from silver nitrate solution involved displacement by copper metal. Write down the reaction involved.Ans. 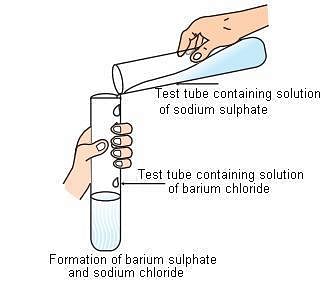 (B) Neutralisation reaction: When an acid reacts with a base to form a salt and water by exchange of ions e.g.-

(5) Oxidation and Reduction reactions or Redox reaction:Oxidation:(i) The addition of oxygen to an element or compound.

(ii) Removal of hydrogen from a compound is known as oxidation. 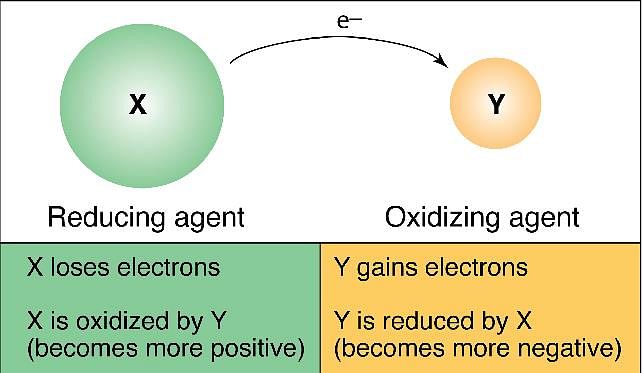 Those reactions in which oxidation and reduction (both) occur simultaneously are called redox reactions. In the name Redox, the term 'red' stands for reduction and 'ox' stands for oxidation.

Ans: SO2 is reduced to sulfur, so it is oxidising agent.H2S is oxidized to sulphur, so it is a reducing agent.It should be noted that substance which undergoes oxidation acts as reducing agent whereas the substance undergoes reduction act as oxidising agent.There is another concept of oxidation and reduction in terms of metals and nonmetals.(i) The addition of nonmetallic element (or removal of metallic element) is called oxidation.(ii) The addition of metallic element (or removal of nonmetallic element) is called reduction.Ques : A shiny brown colored element 'X' on heating in the air becomes black in colour. Name the element 'X' and the black coloured compound formed.Ans: An element of heating in air changes in its oxide. The brownish element which forms black oxide is copper.

So, Name of the element Copper (Cu)Name of black compound: Copper(II) oxide, (CuO)Reaction

Electronic concept for oxidation and reductionOxidation: The loss of an electron by atoms or ions is called oxidation.Atom → Cation + electronsA → An+ + ne-Atom 'A' loses n electrons to become a positively charged ion An+. It is called a cation.

Reduction: The gain of an electron by an atom or ion is called reduction.B + ne- → Bn-The atom B gains n' electrons to become negatively charged ion Bn-, it is called anion.Oxidation and reduction reactions occur simultaneously and are called as redox reactions. Only oxidation or only reduction is called half-reaction. i.e.A → An+ + ne- - OxidationB + ne- → Bn- - ReductionA + B → A+B- → AB Redoxe.g. Na + Cl → NaCl

(i) Corrosion of metals: Corrosion is the process of deterioration of metals as a result of its reaction with air, moisture, and acids. (Present in the environment) surrounding it. 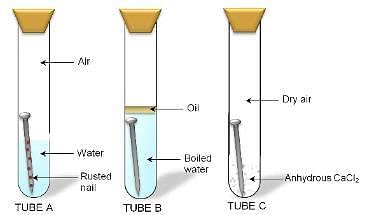 The corrosion causes damage to buildings, bridges, ships and many other articles specially made of iron.

Rust: Iron corrode readily when exposed to moisture and gets covered with a brown flaky substance called rust. 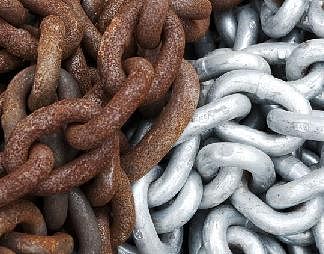 Rusting of iron takes place under the following conditions -(a) Presence of air (or oxygen)(b) Presence of water (or moisture)It has been observed that- Presence of impurities in the metal speed up the rusting process. Pure iron does not rust.- Presence of electrolytes in water also speeds up the process of rusting- The position of the metal in the electrochemical series determines the extent of corrosion. More the reactivity of the metal, there will be more possibility of the metal getting corroded.

Other examples of corrosion are -

- Silver articles become black after sometimes when exposed to air because it reacts with sulfur to form a coating of silver sulfide.- Lead or stainless steel lose their luster due to corrosion.

Unreactive metals such as gold, platinum, palladium, titanium, etc. do not corrode.

(ii)Rancidity: Fresh foods containing fats and oils smell and taste pleasant but when it remains exposed in air for a long time it's smell and taste changes to unpleasant. It is said that food has become rancid. 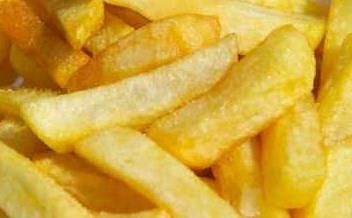 Prevention of rancidity:(i) Rancidity can be prevented by adding antioxidants to foods containing fats and oils. Antioxidants are reducing agents so when they are added to food it does not get oxidised easily and hence do not turn rancid.

Vitamin-E and vitamin-C (ascorbic acid) are the two antioxidants occurring in natural fats.

The document Enter required prob Notes - NEET is a part of NEET category.
All you need of NEET at this link: NEET