The document Escape Velocity Class 11 Notes | EduRev is a part of the Class 11 Course Physics Class 11.
All you need of Class 11 at this link: Class 11

7.3 Projection of Satellites and Spaceships From Earth

To project a body into space, first it should be taken to a height where no atmopshere is present then it is projected with some initial speed. The path followed by the body also depends on the projection speed. Lets discuss the cases step by step.

Consider the situation shown in figure. A body of mass m is taken to a height h above the surface of earth to a point A and then projected with an insertion velocity vp as shown in figure. 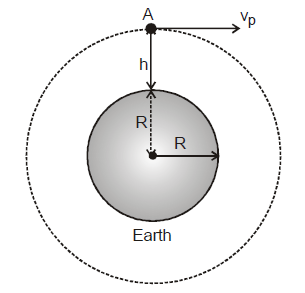 If h is small compared to radius of earth, we have

This velocity v1 = 7.93 km/s with which, when a body is thrown from earth's surface tangentially so that after projection it becomes a satellite of earth in a circular orbit around it, is called orbital speed or first cosmic velocity.

If after projection body becomes a satellite of earth then it implies it is bounded to earth and its total energy is negative. If at point A, that much of kinetic energy is imparted to the body so that total energy of body becomes zero then it implies that the body will reach to infinity and escape from gravitational field of earth. If vII is such a velocity then we have

When body is thrown with speed more then vII then it moves along a hyperbolic trajectory and also leaves the region where the earth's gravitational attraction acts. Also when it reaches infinity some kinetic energy will be left in it and it becomes a satellite of sun, that is small artificial planet.

All the calculations we've performed till now do not take into account the influence of the sun and of the planets on the motion of the projected body. In other words we have assumed that the reference frame connected with the earth is an inertial frame and the body moves relative to it. But in reality the whole system body and the earth is in a non inertial frame which is permanently accelerated relative to sun.

Lets take some examples to understand some basic concepts related to gravitational energy and projection.

Ex.14 A spaceship is launched into a circular orbit close to the earth's surface. What additional velocity has now to be imparted to the spaceship in the orbit of overcome the gravitational pull. (Radius of the earth = 6400 km and g = 9.8 m/sec.)

Sol. In an orbit close to earth's surface velocity of space ship is

We know escape velocity is

Ex.15 A particle is fired vertically upward with a speed of 9.8 km/s. Find the maximum height attained by the particle. Radius of the earth = 6400 km and g at the surface = 9.8 m/s2. Consider only earth's gravitation.

Sol. Initial energy of particle on earth's surface is

If the particle reaches upto a height h above the surface of earth then its final energy will only be the gravitational potential energy.

According to energy conservation, we have

Ex.16 A satellite of mass m is orbiting the earth in a circular orbit of radius r. It starts losing energy slowly at a constant rate C due to friction. If Me and Re denote the mass and radius of the earth respectively, show the the satellite falls on the earth in a limit t given by

Sol. Let velocity of satellite in its orbit of radius r be v then we have

When satellite approaches earth's surface, if its velocity becomes v', then it is given as

The total initial energy of satellite at a distance r is

The total final energy of satellite at a distance Re is

As satellite is loosing energy at rate C, if it takes a time t in reaching earth, we have

Ex.17 An artifical satellite is moving in a circular orbit around the earth with a speed equal to half the magnitude of escape velocity from the earth.

(i) Determine the height of the satellite above earth's surface.

(ii) If the satellite is stopped suddenly in its orbit and allowed to fall freely onto the earth, find the speed with which it hits the surface of the earth.

Sol. (i) Let M and R be the mass and radius of the earth respectively. If m be the mass of satellite, then escape velocity from earth vc =

From equation written above, we get