The use of colloids vs crystalloids is still very specifically controversial. A colloid preferred by a physician or basically a plasma expander may work better if colloids are present instead of crystalloids. Many of the colloids might contain albumin which has osmotically equal to plasma and 25% of solutions.Colloids help in pulling fluid into the bloodstream. Their effects last several days if the lining of the capillaries is found to be normal.Most of these colloid solutions have the following characteristics.

Examples of Colloids in Chemistry 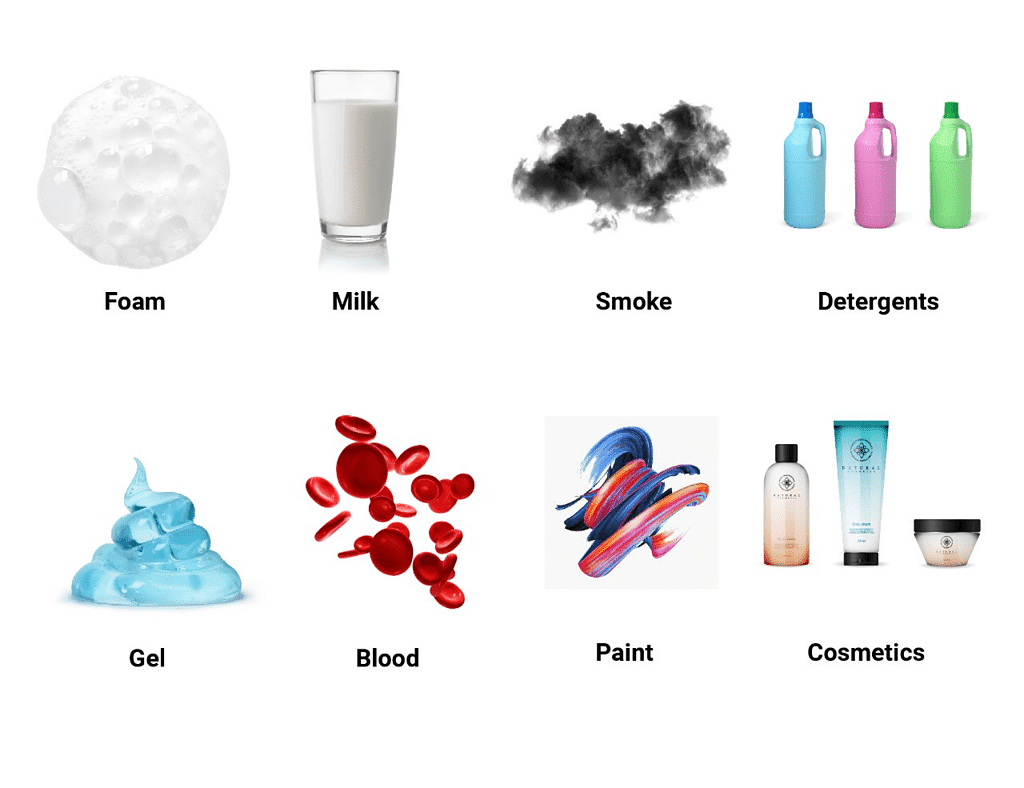 The properties of colloidal dispersions are closely linked to the high surface area of the dispersed phase and the chemistry of these interfaces. This natural combination of colloid and surface chemistry represent a major research space and we get to see a variety of categories of colloids based on these basic properties.Examples: fog, smog, and sprays

Examples: smoke and dust in the air

The huge difference in surface area of colloids and surface of attachments follows the natural fact that particulate matter has a high surface area to mass ratio. This leads to one of the properties of the surface as a factor for colloidal solutions.

For example, the molecules of organic dye or pollutants can possibly be removed effectively from water by the method of adsorption onto particulate activated charcoal. This is because of the coal’s high surface area. This property and process are widely used for water purification and all kinds of oral treatments.

Molecules in the bulk of liquid can interact via attractive forces with many nearest neighbors than those at the surface. The molecules at the surface must have higher energy than those in bulk as they are partially freed from bonding with neighboring molecules.

Work must be done to take fully interacting molecules from the bulk of liquid to create any new surface. This gives rise to surface energy or tension of a liquid and hence stronger the molecular force between liquid molecules the greater will be the work done.

Types of Colloids and Examples

Colloids are classified according to the state of the dispersed phase and the dispersion medium.

Examples of Colloids in Daily Life

There is a huge number of products that we get to use either directly or indirectly on a daily basis. Some of these products are quite relevant to our life. Rest are although used in some way or other, we never get to see them in our immediate surroundings.

The examples of colloids that we usually find around us are as follows.

Examples of Colloids in Medicine