The document Factors that Affect Solubility Class 12 Notes | EduRev is a part of the JEE Course Chemistry Class 12.
All you need of JEE at this link: JEE

where, K is the proportionality constant.When P = 1, m = K, i. e., the solubility of the gas at unit pressure is equal to constant K.

The magnitude of K depends upon 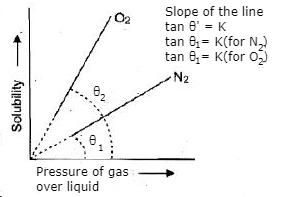 This plot shows the variation of solubility of some gases against equilibrium pressure. The straight line graphs show the validity of Henry's law.

Dalton, a contemporary of Henry, also concluded independently that the solubility of a gas in a liquid solution is a function of the partial pressure of the gas. If we use the mole fraction of the gas in the solution as a measure of its solubility, then:

Here KH is Henry’s law constantor,If we draw a graph between partial pressure of the gas versus mole fraction of the gas in solution, then we should get a plot of the type as shown in figure. 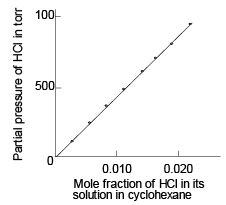 Experimental results for the solubility of HCl gas in cyclohexane at 93 K. The slope of the line is the Henry's law constant KH. 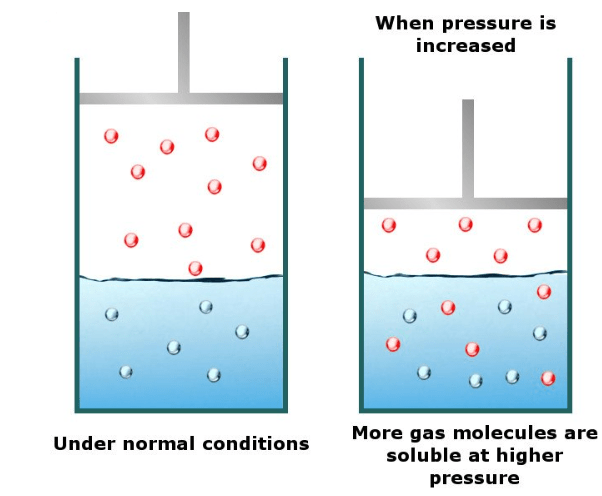 (ii) The solubility of a gas in liquid decreases with increase in Henry’s Law constant (KH), at a given pressure.

This means at a given pressure higher the value of KH (Henry’s Law constant), the lower is the solubility of the gas in a liquid and vice versa.

APPLICATION OF HENRY’S LAW
(i) Since solubility of gas in liquid increases with increase in pressure, hence to increase the solubility of CO2 in soft drinks and soda water, the bottle is sealed under high pressure. 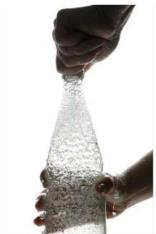 (ii) Scuba divers have to face the problems of bends. When they dive and go deeper in water, pressure gradually increases resulting in increase in the solubility of atmospheric gases in blood. Bends is a medical condition which blocks the blood capillaries due to formation of bubbles of nitrogen in blood. Bends is very painful and dangerous to life.
When scuba divers come towards the surface of water they have to face bends. Hence scuba diver use a tank filled with air diluted with helium (11.7% helium, 56.2% nitrogen and 32.1% oxygen) to avoid bends as well as toxic effects of high concentration of nitrogen in the blood because of increase in pressure underwater and decreasing pressure towards the water surface.

(iii) People, who live at high altitudes and climbers (mountaineers) have to face a problem called anoxia. Anoxia is also a medical condition. 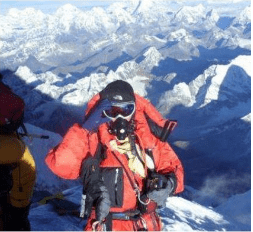