1. Unitary government: all powers vested with the national government

2. Federal government: Powers are divided between the national and the regional government by the Constitution itself

3. Units of a federation known by many names like States (India) or Cantons (Switzerland)

4. Federation can be formed in two ways(a) Coming together: by way of integration

(b) Holding together: by way of disintegration

5. Indian Constitution provides for a federal scheme to account for the diverse population and the vast size of the country6. It combines efficient governances with national unity and regional autonomy7. However, India does not describe itself as a federation.8. The term federation is not used in the Constitution. Article 1 describes India as a Union of States.9. Term 'Union, preferred over the term federation, as

10. The Indian federal scheme is based on the Canadian model and not the American model. 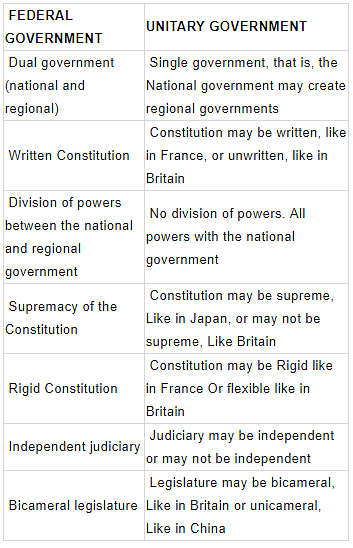 4. Supremacy of the Constitution

2. States are not indestructible

4. Flexibility of the Constitution

5. No equality of state representation

11. Parliaments Authority over the State

PYQsPRELIMS 2015 100. Which one of the following is not a feature of Indian federalism?(a) There is an independent judiciary in India(b) Powers have been clearly divided between the Centre and the States.(c) The federating units have been given unequal representation in the Rajya Sabha(d) It is the result of an agreement among the federating units ⇐MAINS2014 Though the federal principle is dominant in our Constitution and that principle is one of its basic features, but it is equally true that federalism under the Indian Constitution leans in favour of a strong Centre, a feature that militates against the concept of strong federalism. DiscussANSWER