The document First Law Of Thermodynamics Notes | EduRev is a part of the JEE Course Chemistry Class 11.
All you need of JEE at this link: JEE

The first law of thermodynamics states that energy can neither be created nor destroyed, although it can be transformed from one form to another. This is also known as the law of conservation of energy. The energy of an isolated system is constant. ➤ Case 1: Let UA be the energy of a system in its state A and UB be the energy in its state B.Suppose the system while undergoing change from state A to state B absorbs heat q from the surroundings and also performs some work (mechanical or electrical), equal to w. ➤ Case 2: In general, if in a given process the quantity of heat transferred from the surrounding to the system is q and work done on the system is w, then the change in internal energy.ΔU = q + worΔE = q +  wThis is the mathematical statement of the first law of thermodynamics.

Some useful conclusions drawn from the first law:

ΔE = q + w(i) When a system undergoes a change ΔE=0, i.e. , there is no increase or decrease in the internal energy of the system. The first law of thermodynamics reduces to0 = q + w

(iv) In case of gaseous system, if a gas expands against the constant external pressure, P, let the volume change be !:lV. The mechanical work done by the gas is equal to -P x !:lV. 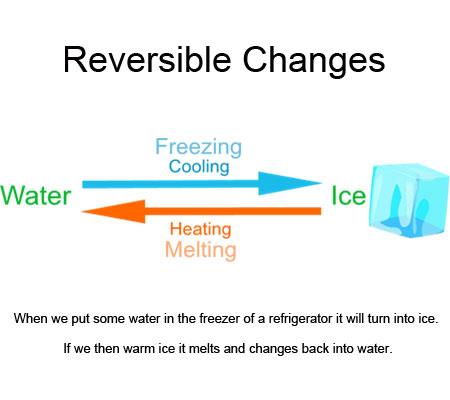 A process or change is said to be reversible, if a change is brought out in such a way that the process could, at any moment, be reversed by an infinitesimal change. A reversible process proceeds infinitely slowly by a series of equilibrium states such that system and the surroundings are always in near equilibrium with each other.

Here, we have listed a few examples of Reversible Process:

To get an idea of a reversible process we can consider the following system:An ideal gas is enclosed in a container and a massless piston is put on the gas on which a pile of sand is placed having particles of negligible mass. To carry out a reversible expansion we will slowing decrease the mass of the sand let’s say by removing the particles one by one, so the expansion of the gas will take place at infinitesimally small rate and we can always assume the system to be in thermodynamic equilibrium. So, the expansion will be of reversible type. An irreversible process can be defined as a process in which the system and the surroundings do not return to their original condition once the process is initiated. Taking an example of an automobile engine, that has travelled a distance with the aid of fuel equal to an amount ‘x’.During the process, the fuel burns to provide energy to the engine, converting itself into smoke and heat energy. We cannot retrieve the energy lost by the fuel and cannot get back the original form.There are many factors due to which the irreversibility of a process occurs, namely:

Thus, some processes are reversible while others are irreversible in nature depending upon their ability to return to their original state from their final state.➤ Examples of Irreversible Processes

A few examples of Irreversible Processes are: