FORCE ON A CURRENT CARRYING CONDUCTOR PLACED IN A MAGNETIC FIELDA current carrying conductor produces a magnetic field around it. When it is placed in a magnetic field, the two magnetic fields interact with each other and a net force acts on the conductor.

If the conductor of length l, carrying current I is lying inside a magnetic field of intensity B and is making an angle q with it, then force acting on the conductor is given by 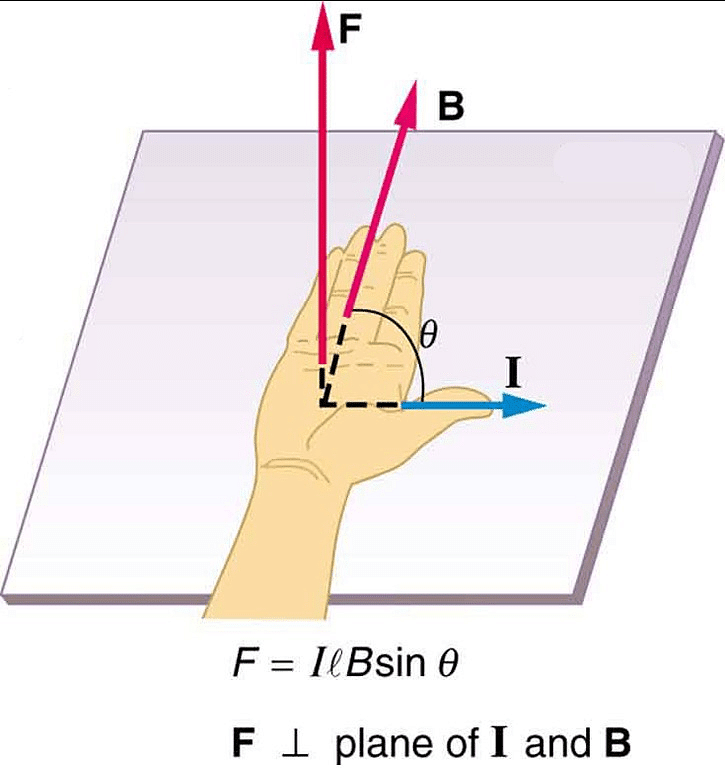 If the conductor is lying perpendicular to the magnetic field, then

This force acts in a direction which is perpendicular to the plane containing the conductor and the magnetic field (Fig.) and is maximum.

If the conductor is lying parallel to the magnetic field, then θ = 0° (sin θ = 0) and the force becomes zero and is minimum.

Fleming's Left Hand RuleDirection of the force acting on a current carrying conductor when placed in a magnetic field is given by Fleming's left hand rule, which states that: 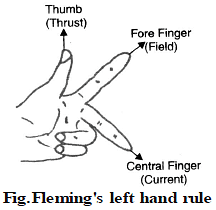 The force acting on a current carrying conductor is placed in the magnetic field depends upon :

(ii) The strength of the electric curent : If large current flows through the conductor placed in the magnetic field, it experiences a large force. That is F ∝ I.

(iii) The length of the conductor : A long conductor experiences a greater force than the short conductor, when placed in the magnetic field. That is, F ∝ ℓ.

Thus, magnetic field strength (B) is defined as the force acting per unit current per unit length of a conductor placed perpendicular to the direction of the magnetic field.

The phenomenon in which an electric current is induced in a circuit because of a changing magnetic field is called electromagnetic induction.When a straight metallic wire is moved up and down in a magnetic field between the two poles of a horse shoe magnet then magnetic flux (number of magnetic lines of force) linked with the wire changes and an electric current is produced in the wire. A galvanometer connected across the two ends of the wire shows some deflection indicating that some current is produced. This current lasts only as long as the change in the flux continues.

Factors on which induced current depends

The value of induced current depends upon :

(ii) The strength of the magnet : A strong magnet moved towards or away from the closed coil produced a large induced current.

(iii) The speed with which the magnet moves towards the coil : If the magnet moves very quickly, then large induced curent is produced in the closed coil.FARADAY'S DISCOVERY OF ELECTROMAGNETIC INDUCTIONMichael Faraday in 1831, discovered phenomenon of electromagnetic induction. His experimental set up is shown in fig. 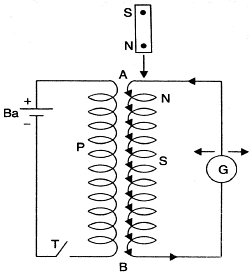 Faraday performed a similar experiment by putting a primary coil P near coil AB. He completed primary circuit with a battery Ba and tapping key T.

So long as key was open, no deflection was seen in the galvanometer G. As the key was pressed and primary circuit was closed, galvanometer

showed some deflection to the right. Deflection became zero when key was kept pressed. When key was left to open, deflection in the galvanometer to the left side was observed. 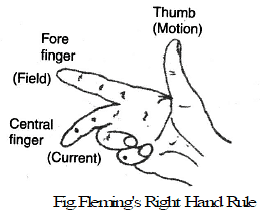 The document Force on a Current Carrying Conductor & Fleming's Left & Right Hand Rule Notes | Study Science Class 10 - Class 10 is a part of the Class 10 Course Science Class 10.
All you need of Class 10 at this link: Class 10
Join Course