An advantage of voltaic cells is that they are small and portable, but their size is also a limitation. The amount of electric current produced is limited by the number of reagents contained in the cell. 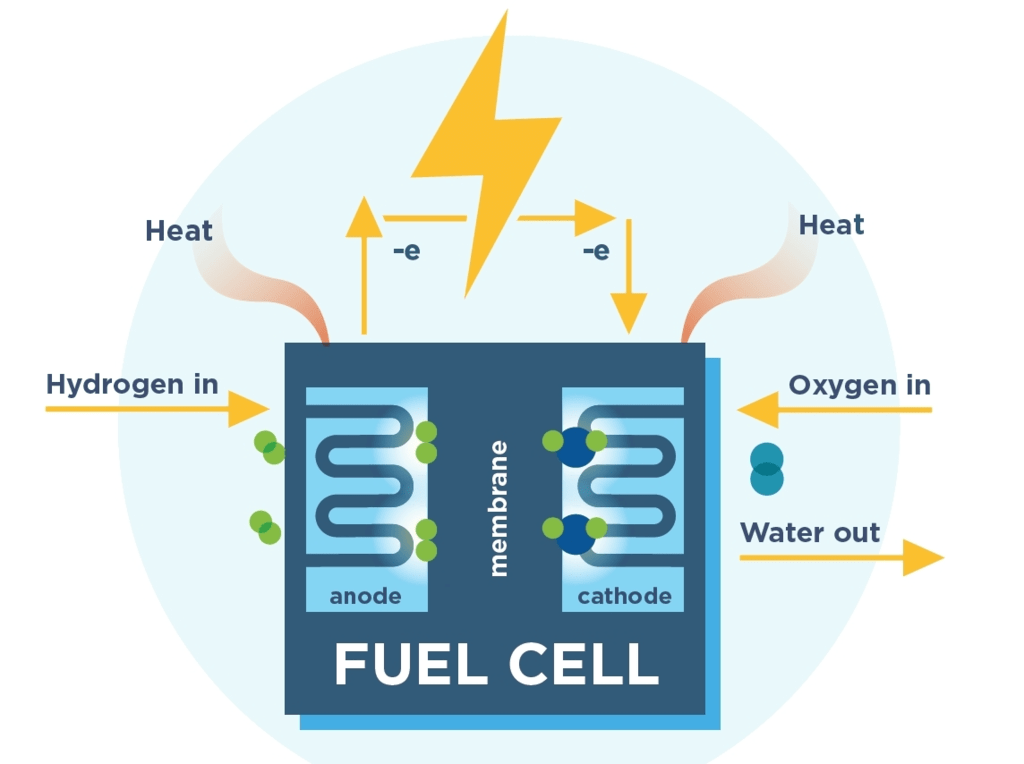 When one of the reactants is completely consumed, the cell will no longer generate a current. Fuel cells avoid this limitation because the reactants (fuel and oxidant) can be supplied continuously to the cell from an external reservoir.

In a Hydrogen - Oxygen fuel cell figure, hydrogen is pumped onto the anode of the cell, and O2 (or air) is directed to the cathode where the following reactions occur. Schematic diagram of a modern hydrogen-oxygen fuel cell. Commonly used electrolytes are NaOH solution, phosphoric acid, or solid oxides. A major limitation of any oxygen-consuming fuel cell is the slow rate of the reduction of this element at a cathode. The best cathode surfaces are usually made of platinum, which is a major cost factor in fuel cell design.

Corrosion can be defined as the deterioration of materials by chemical processes. Of these, the most important by far is electrochemical corrosion of metals, in which the oxidation process M → M  + e- is facilitated by the presence of a suitable electron acceptor, sometimes referred to in corrosion science as a depolarizer.

In a scene, corrosion can be viewed as the spontaneous return of metals to their ores: the huge quantities of energy that were consumed in mining, refining, and manufacturing metals into useful objects is dissipated by a variety of different routes.

The special characteristic of most corrosion processes is that the oxidation and reduction steps occur at separate locations on the metal. This is possible because metals are conductive, so the electrons can flow through the metal from the anodic to the cathodic regions. The presence of water is necessary in order to transport ions to and form metal, but a thin film of adsorbed moisture can be sufficient. A corrosion system can be regarded as a short-circuited electrochemical cell in which the anodic process is something like

and the cathodic steps can be any of

where M is a metal. Which parts of the metal serve as anodes and cathodes can depend on many factors, as can be seen from the irregular corrosion patterns that are commonly observed. Atoms in regions that have undergone stress, as might be produced by forming or machining, often tend to have higher free energies, and thus tend to become anodic.

Since both the cathodic and anodic steps must take place for corrosion to occur, prevention of either one will stop corrosion. The most obvious strategy is to stop both processes by coating the object with a paint or other protective coating. Even if this is done, there are likely to be places where the coating is broken or does not penetrate, particularly if there are holes or screw threads.

A more sophisticated approach is to apply a slight negative charge to the metal, thus making it more difficult for the reaction M →M2+  + 2e- to take place.

One way of supplying this negative charge is to apply a coating of a more active metal. Thus a very common way of protecting steel from corrosion is to coat it with a thin layer of zinc; this process is known as galvanizing. The zinc coating, being less noble than iron, tends to corrode selectively. Dissolution of this sacrificial coating leaves behing electrons which concentrate in the iron, making it cathodic and thus inhibiting its dissolution. 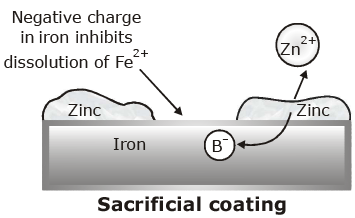 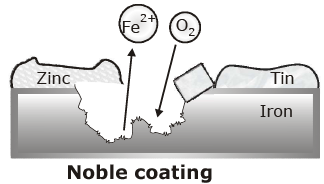 The effect of plating iron with a less active metal provides an interesting contrast. The common tin-plated can (on the right) is a good example. As long as the tin coating remains intact, all is well, but exposure of even a tiny part of the underlying iron to the moist atmosphere initiates corrosion. The electrons released from the iron flow into the tin, making the iron more anodic so now the tin is actively promoting corrosion of the iron! You have probably observed how tin cans disintegrate very rapidly when left outdoors.

A more sophisticated strategy is to maintain a continual negative electrical charge on a metal, so that its dissolution as positive ions is inhibited. Since the entire surface is forced into the cathodic condition, this method is known as cathodic protection. The source of electrons can be an external direct current power supply (commonly used to protect oil pipelines and other buried structures), or it can be the corrosion of another, more active metal such as a price of zinc or aluminum buried in the ground nearby.