•    Iron and calcium are also present.

•    Second layer of the interior of the earth.

•    Upper portion of mantle and crust together known as Lithosphere, lower mantle - Aesthenosphere.

The Classification of Rocks

Erupted from volcanoes, molten material moves towards surface of earth through crack).

•    Normally crystalline in structure, do not occur in strata & do not contains fossils.

•    Can be subdivided on the basis of mineral composition.

•    When they contain high proportion of silica they are said to be Acidic, which are less dense & lighter in color than basic rocks for ex. Granite

•    Are parent / primary rocks as all other rocks are derived from it.

•    In terms of origin they can be divided into mainly 2 classes viz.

•    Rocks may be fine grained or coarse, soft or hard & material forming them may be brought by streams, glaciers, winds or even animals.

•    May be derived from Igneous, Metamorphic or Sedimentary rocks.

•    Hence, Sedimentary rocks are most varied in formation of all rocks.

•    They are non-crystalline & often contains fossils of animals, plants & other microorganisms. 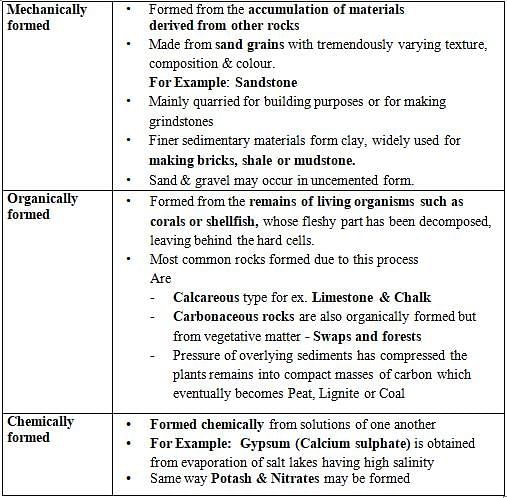 Formed when original structure of igneous & sedimentary rocks partially or wholly change under the action of heat & pressure.

•    Formed by folding of geosyncline sediments under compressible tectonic forces.

•    Since the rock strata have been elevated to great heights, Fold Mountains are also called mountains of elevation.

•    Are closely associated with volcanic activities.

•    Are rich in mineral resources such as Tin, Copper, Gold & Petroleum

•    Formed due to faults caused by tension or compression forces which lengthen or shorten earth’s crust.

•    It causes a section of it to subside or rise above the surrounding level.

•    Faulting results in formation of Block Mountains & their counterparts in rift valleys.

•    In general, large scale Block Mountains & rift valleys are due to tension rather than compression.

•    Also known as mountains of accumulation.

•    Formed due to accumulation of thick lava as a result of volcanic eruption.

•    Formed due to waning of previously existing elevated regions by erosion.

•    Mountains evolved by denudation, where the general level of land have been lowered by agents of denudation; also known as mountains of denudation.

•    An elevated area compared to its surroundings, having a large almost flat top area (Also known as tableland).

•    Like all highlands, Plateaus are also subjected to erosional processes, as a result their original characteristics are highly altered.

•    According to their mode of formation & their physical appearance, plateaus may be divided into 3 types viz.

•    Formed by earth movements which causes uplift, of a considerable size with fairly uniform altitude.

•    When plateaus are surrounded by mountains they are known as intermontane plateaus for ex. Tibetian plateau, Bolivian Plateau.

•    When plateaus are surrounded by sea or plains they are known as Continental Plateaus For ex. Deccan plateau, Greenland plateau, South Africa plateau

•    Molten lava from the volcanic eruption may solidify to form successive sheets of basalatic lava, known as Lava plateau.

•    Generally Plateaus have rich mineral resources & have been actively mined for ex.

•    Plains usually are the best land of a country & are heavily cultivated & populated.

•    Even more at places where rivers transverse the plains.

•    For ex: Indo Gangetic Plains, Mississippi Plains & Yang-Tze plain .Some of the most extensive temperate plains are Grasslands like Russian Steppes,

•    Plains may be grouped into 3 major types based on their mode of formation viz.

•    Structurally depressed areas of the world that makes up some of the most extensive natural lowlands on the earth’s surface.

•    Rock layers on the earth’s crust are aligned almost horizontally.

•    They are formed by horizontally bedded rocks, relatively undisturbed by the crustal movements of the earth.

•    Plains formed by deposition of materials brought by various agents of transportation.

•    Comparatively of equal level but rise gently towards adjacent highlands.

•    May also drop boulder clay (mixture of various sizes of boulders & clay) to form till plain or drift plain.

•    Outwash plains are usually barren lands but boulder clay may be very valuable for farming.

•    Winds may blow Aeolian deposits, very fine particles known as loess, from interior deserts or barren surfaces & deposit them upon hills, valleys or plains forming a loess plateau (ex. in NW China) or a loess plain (Ex. In Pampas of Argentina)

•    Many of the loess covered plains in the world are fertile agricultural regions.

•    These plains are carved by the agents of erosion (Rain, river, ice, and wind)

•    Such plains of denudation are described as Peneplains, which means almost plains.

•    However scooped out by the ice are now filled by the lakes for ex. In Northern Europe & Northern Canada.

•    In arid & semi-arid regions, wind erosion lowers the level of the land which are called Reg in Africa.