The document General Defences of Tort - Law of Tort, Notes | EduRev Notes is a part of the CLAT Course Legal Reasoning for CLAT.
All you need of CLAT at this link: CLAT

When a person consents to the infliction of some harm upon himself he has no remedy for that in tort. In case, the plaintiff voluntarily agrees to suffer some harm, he is not allowed to complain for that and his consent serves as a good defence against him. No man can enforce a right which he has voluntarily waived or abandoned.

(i) When you invite somebody to your house, you cannot sue him for trespass.

(ii) A player in a game of hockey has no right of action if he is hit while the game is being lawfully played.

For the maxim volenti non fit injuria to apply, two points have to be proved :-

(i) The plaintiff knew that the risk is there

(ii) Knowing the same, consents to suffer the harm but the consent must be free.

Rescue cases form an exception to the application of the doctrine of volenti non fit injuria. When a person voluntarily undertakes a risk out of a sense of legal or moral duty, to rescue somebody from imminent danger and sustains an injury, he can recover damages in tort from the person due to whom the situation arose.

In a leading English case A railway passenger fell down of a running railway car due to the negligence of the railway company. When the car stopped, his companion got down and walked back to search for his friend. There was darkness, the rescuer missed his footsteps and fell down from the bridge resulting in injuries to him. He brought an action against the railway company. Held, it being a case of rescue, the railway company was liable.

Accident means an unexpected injury and if the same could not have been foreseen and avoided in spite of reasonable care on the part of the defendant, it is inevitable accident. It is, therefore, a good defence if the defendant can show that he neither intended to injure the plaintiff nor could he avoid the injury by taking reasonable care.

Act of god is a good defence to any action in tort. Thus, when the damage, loss or injury is caused on account of operation of natural forces or phenomena, such as heavy downpour, storms, floods, earthquakes droughts etc, the defendant can escape liability. The two essential ingredients of the defence of act of god are:-

b) The occurrence must be extraordinary.

Under the law of contract, one of the principles is that no court will aid a person who forward his cause of action upon an immoral or an illegal act. The maxim is “Ex turpi causa non oritur actio” which means, from an immoral cause no action arises. It means that if the basis of the action of the plaintiff is an unlawful contract, he will not in general, succeed to his action.

An act causing damage if done under necessity to prevent a greater evil is not actionable even though harm was caused intentionally.

For example :- The defendant who entered the plaintiff’s premises in good faith to extinguish fire at which the fireman had already been working will be held liable for trespass.

The damage resulting from an act, which the legislature authorizes or directs to be done is not actionable even though it would otherwise be a tort.

For example :- In a leading case sparks from an engine of the respondent’s railway company, which had been authorized to run the railway, set fire to the appellant’s woods on the adjoining land. It was held that since the respondents had taken proper care to prevent the emission of sparks and they were doing nothing more than what the statute had authorized them to do. They were not liable.

- Employer and employee or master and servant 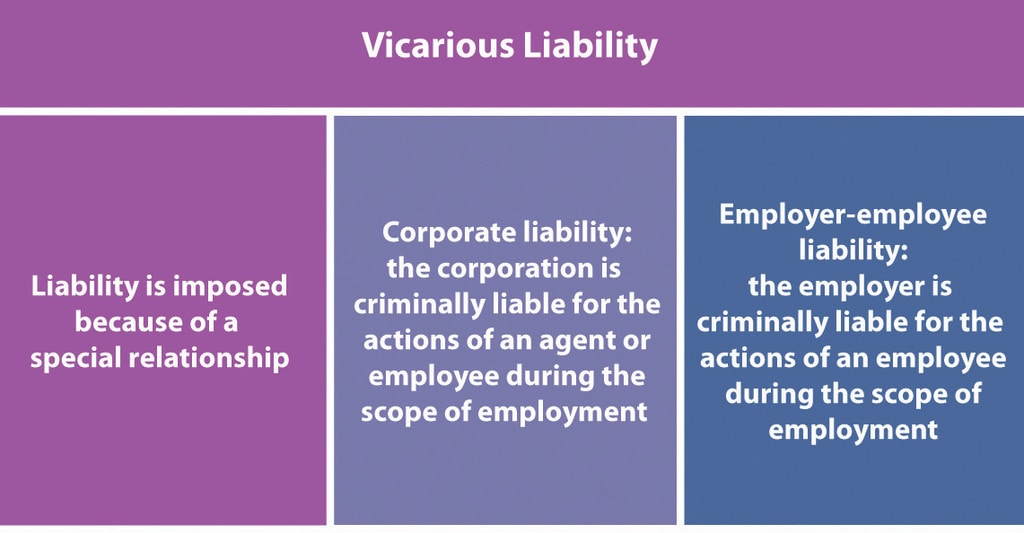 For example:- My car driver is my servant. If he negligently knocks down X, I will be liable for that, but if I hire a taxi for going to the railway station and the taxi driver negligently hits X, I will not be liable towards X because the driver is not my servant but only an independent contractor.

Where one person authorized another to commit a tort, the liability for that will be not only of that person who has committed it but also of that who authorized it. The authority to do the act may be expressed or implied. The principal generally does not expressly ask his agent to do wrongful acts, but when the agent acts in the ordinary course of the performance of his duties as an agent, the principal becomes liable for the same.

For example:- In a leading case the plaintiff’s husband gave some amount and cheques to his friend, who was an employee in the defendant bank for being deposited in the plaintiff’s account. No proper receipt for the deposits was obtained. The bank employee misappropriated the amount. It was held that the employee when he committed the fraud was not acting in the scope of the bank's employment therefore the defendant bank could not be made liable for the same.

The relationship as between partners is that of principal and agent. The rules of the law of agency apply in case of their liability also. For the tort committed by any partner in the ordinary course of the business of the firm, all the other partners are liable therefore to the same extent as the guilty partner.

For example:- One of the two partner’s of the defendant’s firm acting within the general scope of his authority as a partner, braided the plaintiff’s clerk and induced him to make a breach of contract with his employer by divulging secrets relating to his employer’s business. It was held that both the partners of the firm were liable for this wrongful act committed by only one of them.