India and China reached an agreement on disengagement of troops from the north and south banks of the Pangong Lake in eastern Ladakh, Defence Minister Rajnath Singh informed Rajya Sabha. The defence minister assured the House that India has not conceded anything while entering into the disengagement process, adding there are "some outstanding issues" with regard to deployment and patrolling at some other points along the LAC in eastern Ladakh.Under the disengagement agreement, both sides will cease their forward deployments in a phased, coordinated and verified manner in these areas.

These are mutual and reciprocal steps and any structures that had been built by both sides since April 2020 in both North and South Bank areas will be removed. In this edition of the Big Picture, we will analyse the India-China Pullback from UPSC Civil Services Examination perspective.

Edited Excerpts from the Debate

What is in the disengagement agreement?The two sides had reached an agreement to withdraw from Pangong Tso, a glacial lake at 14,000 ft (4,270 metres), after several rounds of talks between military commanders and diplomats from the nuclear-armed neighbours. 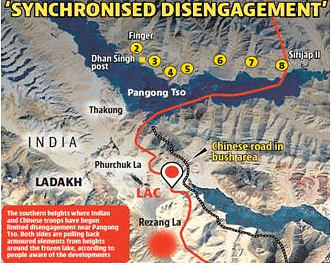 How things added up?

What is the current diplomatic position in China?

How is disengagement carried out on the ground?

Both sides have to de-engage, de-escalate and de-induct the troops to the lines which have been mentioned- Chinese to finger 8 and India to between finger 2 and finger 3.

What are the possible factors responsible for the disengagement of troops?

ConclusionThough this is a possible development, some issue remains concerning deployment and patrolling at some points along the LAC in Eastern Ladakh. They will be discussed during future India-China talks at the military and diplomatic level.

What is the source of tension?

What is Pangong Lake?